While Liang’s perspective is uniquely American and uniquely New York, snippets of her Chinese immigrant upbringing are more than evident in her work: apron skirts inspired by the chefs at Congee Village, cropped wide-legged pants as seen on the grandmas in Chinatown, fleece pullovers just like the off-brand hand-me-downs her mother made her wear when she was in school — “and they weren’t even Gap Kids!” she lamented with a laugh.

“It’s not like I have Chinese characters or the traditional [qipao] dresses. I didn’t grow up wearing those,” Liang said, recalling the moments of her childhood in which she had cringed at how different her family was — something that all children of immigrants can relate to. “But with my Spring ‘15 Collection, for instance, I sent out all the invitations in red envelopes, an homage to my culture. It’s very fun and natural to me when I can be like, ‘Oh, that’s a Chinese thing.’” 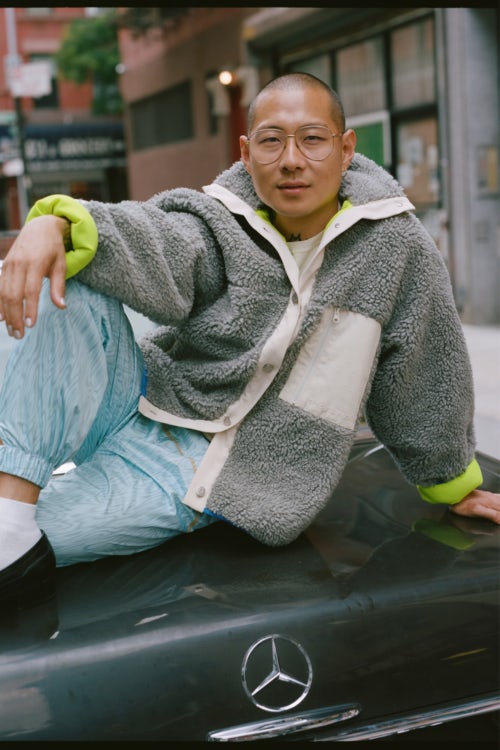 Liang wasn’t the only designer to prominently feature elements of Chinese culture during this year’s Spring/Summer fashion week in New York. LVMH Prize nominee Snow Xue Gao also held her show at a restaurant: Jing Fong, a dim sum staple in Chinatown, where models donned 60s-inspired, East-meets-West looks while playing — or rather pretending to play — Mahjong, amid the restaurant’s decadent red-toned panels and neon green stage lighting, setting a scene straight out of a Wong Kar-Wai film. Fellow Parsons Grad Calvin Luo also gave a nod to the Hong Kong filmmaker in his runway show a few days later with a live, eight-piece orchestra that played the theme to “In the Mood for Love” for the finale walk. And in her debut show, New Zealand-native Claudia Li cast an all-Asian runway — a move, she says, meant to demonstrate the diversity among Asian women.

This new generation of Chinese nationals and designers of Chinese descent taking the global fashion stage builds on the previous wave of Chinese American talent that emerged a decade earlier, during which the likes of Alexander Wang, Phillip Lim, Jason Wu and Derek Lam garnered high accolades and swept the board for fashion’s biggest awards. Cultural identity for these designers, nonetheless, took a backseat to their vocational aspirations.

But in the past few years, designers of Chinese descent are more outwardly celebrating their heritage as China’s booming economy has also led to a heightened sense of cultural pride. Chinese consumers are craving both homegrown talent as well as fashion that resonates with them on a cultural basis, including the work of Chinese designers who may have grown up overseas. Meanwhile, designers of Chinese heritage — alongside other minorities in creative fields — already embedded in the Western market are proclaiming their roots as the concept of identity plays a bigger role in popular culture.

For the first time in modern history, there is a cultural and economic advantage to being a Chinese designer, both in China and abroad — a shift some in the fashion industry are comparing to the emergence of Japanese designers in the 1980s as Japan became a leader in technology and manufacturing.

“When I first started, we had this big wave of Asian American designers: [Derek] Lam, Thakoon, Phillip Lim. That was a really big movement that the industry recognized,” said Alexander Wang, who created his latest collection, shown in June, based on the “immigrant Americana” of his own experience growing as a first-generation Chinese American in San Francisco. He added that he has seen his sales in Asia significantly grow in recent years.

“But China now as a country has been something’s that much more of a topic of conversation; in terms of consumerism — it’s much more of a global influence than when I first started.”

Simone Rocha, the half-Chinese, half-Irish designer who was named the British Womenswear Designer Award of the 2016 at the British Fashion Awards, also had some birthright inspirations behind her Spring 2019 collection, in which she made references to the Tang Dynasty in her prints of vintage concubine portraits, paper suits and red floral embroideries. She said backstage that she was inspired by the rite of Qing Ming, a festival that celebrates ancestry, which she recently experienced on a visit to her grandparents.

The majority of international students at Parsons are now Chinese. At least 14 of NYFW’s 120 labels on the CFDA calendar this year feature designers of Chinese descent. That’s in addition to 14 more Chinese designers outside of the official calendar. Last September, 20 out of 141 labels on the CFDA calendar were helmed by designers of Chinese descent, plus at least 11 more unofficial ones, or about a 200 percent increase from previous years, Refinery29 reported. And that’s just New York.

As the market becomes more developed, a greater sense of confidence in what it means to be Chinese is leading to a growing desire to communicate individualism, personal identity and a Chinese mindset.

Their popularity is fueled in part by the growing influence of the Chinese consumer: more than 75 percent of the total growth in global luxury spending — over $65 billion — could be attributed to Chinese consumers, both domestic and broad, according to a 2017 McKinsey report. They currently account for about 30 percent of all luxury purchases, and often comprise the largest sales demographic for brands like Gucci and Burberry.

“Chinese consumers have previously bought into Western brands to communicate status,” said Yang Li, a London-based designer of Chinese descent who showed his Spring 2019 collection in Paris. “But as the market becomes more developed, a greater sense of confidence in what it means to be Chinese is leading to a growing desire to communicate individualism, personal identity, and a Chinese mindset. This is particularly visible within youth culture ... the youth don't want to dress like their parents.”

While Chinese consumers may have been overwhelmingly partial to brands like Louis Vuitton or Chanel 10 years ago, millennial fashion enthusiasts are now making room in their closets for native labels for these reasons. 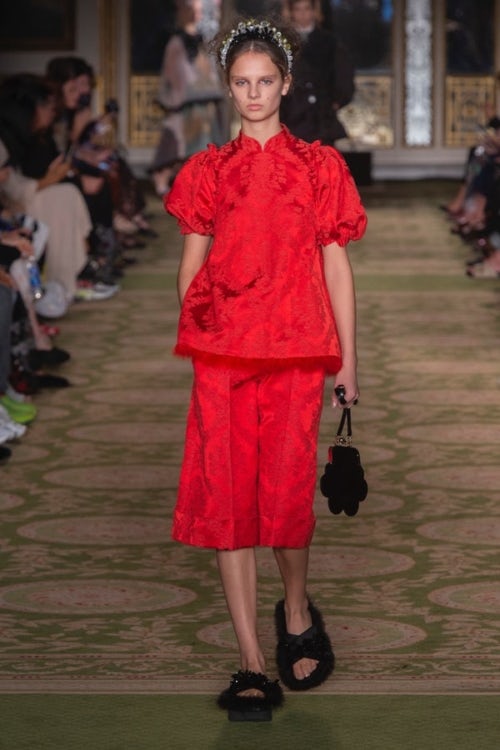 On Tmall, Alibaba’s e-commerce platform, Chinese labels saw triple-digit growth last year, according to Jessica Liu, the platform’s president of fashion and luxury. “This is because of the growth in designer talent, but also because Chinese people see that these designers have closer relation to Chinese culture” — a trend that’s mirrored in modern Chinese music and pop culture. For example, as part of the Tmall presentation during Fashion Week, upscale athleisure brand Particle Fever sent models down the runway in products branded with “CHN.”

For designers within the Chinese diaspora in North America and Europe, the economic boom within China is proving to be an advantage as well, both commercially and in terms of cultural currency.

“There’s definitely a sense of pride,” said Alexander Wang. “China used to be known as a copy-cat country but now, whether it’s digital companies or shopping malls, every brand [wants to test out] that market because it’s the most advanced. I was there last week and went to the largest Starbucks in the world, in Shanghai.”

Before Wang and his generation of designers of Chinese descent in the US, there was the trinity of Anna Sui, Vera Wang and Vivienne Tam, all of whom emerged in the New York scene in the 1980s. But only the latter, Tam, overtly embraced her Chinese heritage in her work. She was one of the first designers to incorporate Eastern aesthetics to collections that reached Western audiences.

“If you’re an immigrant, it’s a struggle from the very beginning,” she said. Tam was born in Guangzhou, China and grew up in Hong Kong. She moved to New York after college and has lived here since. “It was quite difficult. When I’d meet people in the industry, they see that I’m a Chinese and they assumed I was in manufacturing. They’d say, ‘Are you trying to sell me t-shirts and blouses?’ And I’d say, ‘No, I’m a designer. Please give me an opportunity to show you what I’m doing.”

But now, she added, everyone is appealing to the Chinese customer. “A lot of European designers and even department stores are embracing Chinese culture because the Chinese people are travelling everywhere to shop. When it’s Chinese New Year, I see the signage and it makes me so happy.”

As the influence of Chinese consumers continue to blossom, the global economy has in part contributed to a celebration of diversity at large: it’s about more than just Chinese consumers supporting Chinese fashion. It’s a movement that has galvanised Asian creatives around the world. The creation and subsequent success of “Crazy Rich Asians” is a case in point, and Chinese designers abroad are seizing the momentum. 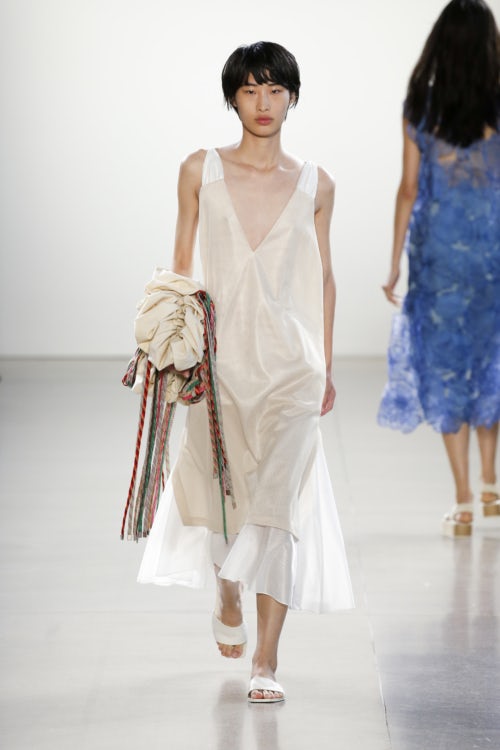 “I feel like I’ve been sort of following the rules since I entered the fashion industry,” said Claudia Li, after her Spring 2019 runway show. “I’m sick of not being able to speak for myself. I had feelings of being categorised and having to follow certain rules that imposed a singularity of what an Asian woman is.”

"But society right now, especially with the movies and how people are focusing on Chinese money… it’s empowered me a little bit more to be able to be myself, to start to speak out about representation,” she added.

But what comes next for talent of Chinese descent will require continued momentum and perhaps a sense of community, which remains sparse among Asian creatives abroad — especially in the fashion community. “I feel like there’s no institutional support,” Claudia Li said. “There is no figurehead to wrangle everyone together and talk about things.”

Yang Li agrees: “The next progression is to create and export culture, creativity and attitude,” he said.

“This progression is certain, but in this rise, we must do so gracefully… As we are now forming how we will be perceived as a cultural leader, there has never been a more important time for Chinese talent on the global stage.”