For luxury menswear purveyors like Zegna, Dunhill and Hugo Boss, all of which moved into China in the ‘90s and rely on the region for a significant part of their businesses, this is bad news. Last year, Zegna’s sales in China — the company’s largest market — fell 5 percent, while Hugo Boss’s China sales fell 2 percent in local currency, dragged down by poor menswear sales, which declined by a double-digit rate for the second consecutive year.

However, there are a few bright spots in China’s menswear market, which was worth CNY492 billion ($74.9. billion) in 2015 and is predicted to reach CNY585 billion ($89 billion) by 2020, according to Euromonitor. Last year, the market for casual menswear outperformed formal menswear in China, opening up opportunities for value brands and luxury labels alike.

“Rare occasions require formalwear as a must in China,” explains Lui Wan, who leads Euromonitor International’s research team in Shanghai. “Even in the workplace, only a few companies have strict rules about wearing formal to work.” In the last few years, casual brands have taken market share from formal brands, she notes, as more men are shopping for plain, relaxed items that are work-friendly and easy to mix and match. 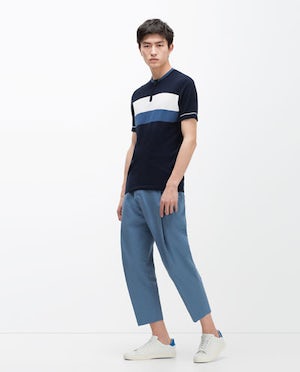 Beneficiaries of these changing tastes include Uniqlo, Nike and Adidas, which have the highest market value share for menswear in China out of international brands, and Zara’s parent company Inditex and H&M, which have been steadily increasing their share since 2011. (Over the same period, Armani and Hugo Boss both lost market share and now have a lower market share than Inditex and Uniqlo.) Last year, Uniqlo recorded the highest value growth of a brand for menswear in China — a fact Wan puts down to its reputation as “affordable with good quality” and the company’s “massive expansion of new stores.”

Indeed, Uniqlo is not holding back — by August 2015, it had 467 stores in Greater China, and Tadashi Yanai, chief executive officer of parent company Fast Retailing, has laid out plans to open 100 stores a year in China “until we reach 1,000 stores, and then aim for 3,000 stores." (He did not put a time frame on this target, which likely reflects the company’s long-term vision more than its immediate strategy. Currently, Uniqlo has 1,774 stores worldwide.)

Adidas, too, is bullish — after sales in Greater China (the group’s second-largest market globally) crossed the €2 billion mark last year (around $2.28 billion), the brand announced plans to add 3,000 stores to its current 9,000 in China over the next five years.

For formalwear labels, the picture is more complicated. Like many luxury brands in the region, purveyors of high-end menswear have been harmed by the overall slowdown in the Chinese economy, which has hurt consumer confidence, and the government’s anti-corruption drive, which has dampened demand for luxury goods. However, some are also taking steps to adapt to China’s increasingly casual male consumer.

“The growth in the casual market was foreseen and we had already begun the move to expand our brand and product offering to compete in this growth sector,” says Fabrizio Cardinali, chief executive officer of British menswear label Alfred Dunhill. Cardinali called China a “challenging market” but said Dunhill had seen growth within its “top stores” in the region. And as Chinese consumers move away from conspicuous consumption and increasingly look to spend on experiences, the brand is providing a more experiential retail offering at its “home” in Shanghai — a villa housing a Dunhill store, tailoring services and a private dining space for clients — and more casualwear products based around its heritage in motoring and golfing.

Italian luxury menswear label Zegna, which has over 70 stores in China, is also looking to tap the rising appetite for casualwear with made-to-measure sportswear and less expensive items like trainers, which appeal to middle-class shoppers.

Meanwhile, Hugo Boss is staking its menswear strategy in China on formalwear and tailoring, which "accounts for a substantially lower share of sales in Asia than in other regions," according to the company — though its 2015 annual report also noted the potential in China for luxury sportswear. However, the German company, which promoted chief financial officer Mark Langer to chief executive last month, will close around 20 of its 145 stores in China, and has warned that weak demand in China and the US will depress profits this year.

While Chinese men — especially younger consumers — are paying more attention to their appearance and product quality than before, growth in the menswear market will slow to a CAGR of 4 percent to 2020, as China’s apparel market continues to mature, according to Euromonitor. Liu Wan notes that the fast development of e-commerce may put downward pressure on unit prices, hindering the value of overall menswear sales. China’s economic woes could also hit consumer confidence, hurting sales at premium and mass-market brands alike.