With similar groups popping up everywhere from Brisbane to Toronto, Hanfu is rapidly growing in popularity, especially among young Chinese women — the average age of wearers is just 21, and nine out of ten are female, according to an industry report published on Sohu. Hanfu fans on the community site Baidu Tieba now exceed 925,000, up from fewer than 700,000 at the beginning of 2017.

That’s a relatively small fraction of China’s 1.39 billion people, but the growing fascination with ostensibly traditional Chinese clothing has broad implications for fashion brands. Why ostensibly? Because Hanfu’s historical credentials are dubious. Some commentators see the trend as retrofitting in service of a new Chinese nationalism. For most Hanfu wearers, though, historical accuracy and nationalism are beside the point.

Among Hanfu fans BoF spoke to, a common inspiration for wearing Hanfu was interest in wuxia (kung fu fantasy epics) and Chinese palace dramas popular on TV and in cinemas, such as  The Story of Yanxi Palace — the most Googled TV show of 2018, whose protagonist Wu Jinyan has gone on to grace the pages of Vogue China and Elle China. Together, wuxia and palace dramas constitute an imaginative world that’s vaster and more compelling to Chinese viewers than the Marvel Universe, which has made over $5 billion in merchandise sales.

“When I was really small, I liked to wear a sheet to pretend I was one of the fantasy characters on TV,” said Sun Ying, explaining her interest in Hanfu. Sun, 28, lives in Huzhou, Zhejiang province, where she runs a fried chicken store. She said she spends several thousand renminbi on Hanfu each year, including material to make her own. Most Hanfu outfits cost 300-500 RMB ($45-70).

I see it in some sense as a form of fantasy and escapism, like cosplay or role-playing video games are for a lot of people.

According to the Sohu report, about 92 percent of people buy their Hanfu from stores (rather than making it or having it made). Online sales are especially popular. Led by Guangzhou’s ‘Han Shang Hua Lian’, the top ten Hanfu stores on Taobao made 50.67 million transactions in November 2018, up 266 percent on the previous November.

The vast majority of people who wear Hanfu do so during hobbyist get-togethers or for photo shoots. “I see it in some sense as a form of fantasy and escapism, like cosplay or role-playing video games are for a lot of people,” said Eric Fish, the author of China’s Millennials: The Want Generation.

Some Hanfu wearers resent that comparison — “If I’m a cosplayer, then I’m cosplaying your ancestors!” Kang Wei told the Chengdu Business Times — but even if Hanfu were only worn as costumes, that’s still a market with significant growth potential.

The annual Hanfu spend is estimated to be about 570 million RMB ($83 million), while Americans spent $3.4 billon on Halloween costumes in 2017. The vast gap between the two signifies a considerable opportunity for some Hanfu entrepreneurs. Comparing Hanfu to Halloween is perhaps not as farfetched as some might claim it to be. Last year, video platform Bilibili and the Communist Youth League together declared April 18 China Hanfu Day, an opportunity to dress up not as ghosts or vampires, but in all kinds of traditional-looking Chinese clothing.

Hanfu’s current popularity stems, in part, from the Hanfu Movement, started in the early 2000's when a few members of China’s Han majority began wearing what they imagined as traditional Han clothing. It was their attempt to stand up for Han culture after myriad historical foreign invasions, ethnic Manchu rule during the Qing dynasty (1636-1912), and what they see as phoney multiculturalism in contemporary China.

Han Chinese are just one of 56 official ethnic groups in China, though they’re by far the largest, with over 90 percent of Chinese citizens identifying as Han. Ethnic minorities therefore constitute approximately 139 million people, counting groups as diverse as the Zhuang, Hui, Miao, Muslim Uyghurs, Tujia, Mongols and Tibetans. 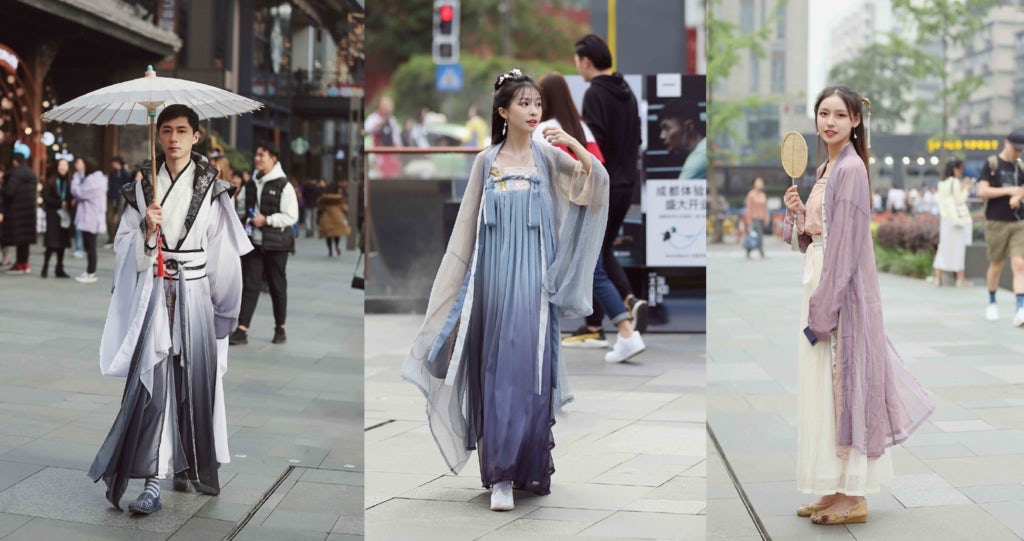 According to Macquarie University lecturer Kevin Carrico, “There was historically nothing called Hanfu because the idea of a Han nationality is [relatively speaking] a very recent invention, and the idea that the vast diversity of people now classified as Han had a singular clothing style is a projection of nationalist, racialist, unificiationist ideology into a far more complex past,” he said.

For the small minority who do see Hanfu as a nationalist movement and a rejection of foreign culture, its growing popularity might bring with it a modest movement away from the foreign brands with which China has been so enamoured. China is the biggest market in the world for major luxury brands, but consumers here have been quick to boycott foreign retailers and brands they perceive as racist — Dolce and Gabbana is one recent example.

Fish said that the movement does have “patriotic undertones”, but that “most Hanfu enthusiasts are in it for the fashion and community more than a racial or xenophobic motivation.” In fact, contrary to popular belief, China’s “young people overall are progressively getting less nationalistic, and there have been studies to back that up,” he said.

When Sun lived in Hangzhou, where she worked at a Toyota dealership, she bought clothes by Coach, Vero Moda and Taiwanese brand Girdear. “After a couple of years working, I didn’t like the environment anymore,” she said. “I wanted to have a freer life. I went back to my hometown and started the store, then I started to wear Hanfu.”

“Life is tough for youth in modern China's hyper-capitalistic and materialistic society, so subcultures [like Hanfu] that harken back to simpler, romanticised times can be very appealing,” said Fish.

The popularity of Hanfu does seems to be congruent with greater confidence in domestic fashion and design. “Chinese consumers are still avid buyers of foreign brands, but Chinese brands are gaining ground on them,” said Fish. “There is a desire to see Chinese brands succeed and be internationally respected, so I think it's possible that an informal ‘buy made in China' drive could unfold in the fashion industry as higher quality products meet a desire to express national pride.”

Carrico is more circumspect. “I see Hanfu as part of a growing confidence in the idea of China, at least. Whether that translates into confidence in Chinese brands is another matter altogether, he said. “Like Han clothing, nationalist declarations are primarily performative. Realities inside people’s minds are always considerably more complex.”

While wearing Chinese traditional clothing is a way for some to avoid conventional fashion boutiques and ignore what’s coming down the runway, for others it’s an aesthetic that marries well with contemporary fashion.

Leading Chinese designers such as Uma Wang and Guo Pei have drawn extensively on traditional Chinese fashion in their designs. It also informed Heaven Gaia’s Spring/Summer 2019 collection at Paris Fashion Week, where model Dongni Zheng said, “every model on the runway is a goddess, and you just walk between the clouds, like heaven.”

Subcultures like Hanfu that hearken back to simpler, romanticised times can be very appealing.

Younger Chinese designers are also drawing influences from Hanfu. Hiuman designer Lola Chau, for instance, drew on the trend in her Spring/Summer 2016 collection. “Lots of my designs incorporate Hanfu thinking,” she said.

It is certainly easier for Chinese brands and designers to tap into the fantasy of life in ancient China than it would be for their foreign counterparts. Some Chinese fashion fans have already shown how well visuals from Chinese fantasies and historical epics work as ads for the likes of Gucci and Kenzo— though some are equally quick to mock foreign brands for slapping zodiac animals on their designs in the lead up to Spring Festival.

With the lines between costume and couture beginning to blur — consider the success Gucci has had with Chinese millennials under creative director Alessandro Michele — even some of the more outlandish and impractical traditional Chinese clothing may yet become a more mainstream part of everyday fashion.

For now, Sun said, “I’m not interested in trendy clothes, or meme clothes. I just want to wear things that are simple.”

“Modern life is not like the old times,” she continued. “In ancient times girls didn’t go out. They stayed in sewing, so they could wear super long dresses and long sleeves, but they don’t suit modern life.” For that reason, she makes her Hanfu skirts shorter and the sleeves tighter.

Though it wouldn’t impress the Hanfu purists, Sun believes “modern clothes and Hanfu can look cool together.”