SHANGHAI, China — Pinduoduo is the latest player to take China’s e-commerce scene by storm. Founded by Google alumnus Colin Huang, the start-up offers shoppers group-buying bargains (know as "tuan gou") on everything from Huawei phones to diapers and a vast array of cheap and cheerful fashion items. It bears a likeness to Groupon’s business model, where coupons become valid if a certain number of users purchase the deal within 24 hours, but unlike Groupon, Pinduoduo extends the reach of traditional bulk-buying deals by tapping into WeChat’s pervasive social media ecosystem.

“On Groupon, users can’t recruit other people and need to rely on the platform’s own attraction,” claimed Joseph Leveque, digital consultant and managing partner at consultancy 31Ten. “Pinduoduo is a lot more granular, as users access deals in pairs, threes and fours through inviting their own friends.”

In 2010, just two years after Groupon launched, Techcrunch estimated there to be 100 Groupon clones operating in China. Many succumbed to Darwinian forces, leaving Meituan, Nuomi and 55tuan as the main group-buying players today. Whereas such Groupon clones focus on customer services and dining experiences, Pinduoduo’s scope is set on goods.

A year after Pinduoduo’s launch in 2015, the app raised over $110 million in a Series B financing round led by Tencent; two years later, it hit 114 million active users and ranked second only to Taobao in China’s e-commerce app hierarchy in December 2017, according to Cheetah Mobile. In April, the platform said it completed another round of financing, led again by Tencent, raising $3 billion.

Users are tempted with viral-friendly features at every turn.

What makes Pinduoduo unique is that it is extraordinarily hyper-social in that users cannot reap its full benefits without digging into their networks. Invitations are sent through WeChat, Tencent’s multi-purpose super-app that fuses communications with commerce, which reached 1 billion monthly active users worldwide in March 2018, according to Tencent chief executive Pony Ma.

To keep the momentum of this bargain mindset, users are tempted with viral-friendly features at every turn. A pair of light-wash distressed jeans for sale on Pinduoduo, for example, has been reduced from 300 RMB ($48) to 50 RMB ($8), but users that buy the jeans with a friend can enjoy a further reduced price of 30 RMB ($4.7). In some instances, shoppers can enjoy deals for up to 90 percent off and be offered a range of products for free when they refer enough friends to install and follow the app’s official accounts. Coupons are active for a few hours at most, one-click payments encourage impulse buys and users are rewarded with lucky ‘red envelopes’ (digital versions of the customary cash-filled packets handed out on Chinese holidays) for high referral rates.

However, some products are visibly of questionable quality, not unlike the more counterfeit-ridden pages of Taobao — another C2C platform owned by Tencent rival Alibaba. Merchants readily make assurances about product authenticity, and prices compete with those of Tencent rivals JD.com and Alibaba-owned Taobao. 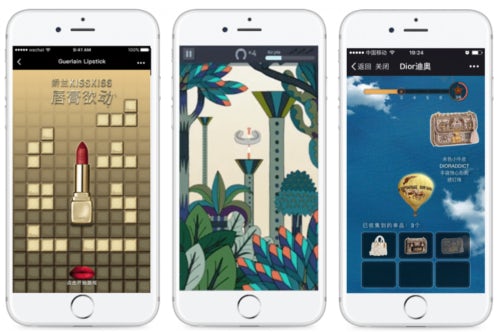 Considering Pinduoduo’s ties to Tencent and the integral role that deal-sharing plays in its business model, it is no surprise that in addition to a WeChat account and mobile app, Pinduoduo has directed users to its WeChat mini-programme. Rather than accessing the store via Pinduoduo’s official account or downloading the app to their phones, users need only search its name in WeChat and seamlessly tap into the platform without leaving the app. In research firm Analysys’ list of Top 100 WeChat mini-programmes of 2018, Pinduoduo ranked third in number of users.

Mini-programmes, which were introduced in January 2017, are WeChat sub-applications or “Tencent’s way of forcing providers to integrate their website into a simplified experience that is exclusive to WeChat,” said 31Ten’s Leveque. He explained that mini-programmes have reached 200 million monthly active users since launch, and at least half of WeChat’s user population has used a mini-programme at least once.

For apps and brands alike, mini-programmes have provided a new avenue after WeChat stores for maximum consumer engagement, by removing the number of taps needed to effect transactions and creating a space in which brands can build tailored interactive experiences. Hence, 95 percent of e-commerce platform brands, including Pinduoduo and JD.com, have created a mini-programme, according to WeChat.

“We launched our WeChat store last year and have seen some great results so far. The mini-programme will be the next iteration of this,” Andrew Robb, Farfetch’s chief operating officer, told BoF.

For a few luxury brands, mini-programmes have emerged as the next step towards a hyper-social e-commerce experience. In one recent campaign, users personalised their photos with animated stickers on Gucci’s highly successful mini-programme, after which they were redirected to a gift card page where they could buy and send perfumes, wallets, candles and cups to their friends.

Mini-programmes are a portal to China’s consumers, who make up over 30 percent of luxury consumption worldwide.

According to Alexis Bonhomme, co-founder and chief strategy officer of digital tech firm Curiosity China, gamification is the next frontier in building viral and hyper-social brand experiences on WeChat. The addictive quality of video games, which have been found to double dopamine levels in the brain, are already being leveraged to illustrate brand history and even drive foot traffic to physical store locations.

Recently, Hermès programmed a popular horseshoe toss game in a nod to its equestrian roots, while Dior promoted its store opening as an interactive treasure hunt where winners received tickets to the event. Menswear brand Jack & Jones’ mini-programme allows users to challenge their friends to a shoppable game, where the winner receives coupons as their prize and Guerlain’s ‘My Rouge-G’ game promotes the brand’s latest lipstick collection by challenging players to visit physical stores and collect rewards.

According to Curiosity China, the Guerlain game has attracted 18,582 page views and 10,000 players to date. “As we speak, we are working with premium and luxury brands on more interaction-focused campaigns to do with sharing photos, travelling, social habits, purchase and fashion knowledge among friends,” said Bonhomme.

In making use of the platform’s exposure and capabilities, brands should also be mindful of the shortcomings of mini-programmes. As users needn’t subscribe to, follow nor download anything to use a mini-programme, brands must retain user data by other means. WeChat limits a brand’s capacity to send users push notifications, making mini-programmes less interactive than other platforms.

“Mini-programmes actually lessen the power that brands have over traction and marketing on WeChat, which many brands have not fully realised,” claimed Leveque. Furthermore, mini-programs have yet to support live streams — arguably the most viral medium on Chinese social media at present — which are mostly published on official accounts.

Regardless, brands continue to flock to mini-programmes as a portal to China’s consumers, who make up over 30 percent of luxury consumption worldwide. To retailers such as Farfetch, which announced a partnership with Chinese retail giant JD.com in June 2017 and began shipping to China in 2008, mini-programmes are the obvious next step in a sophisticated omnichannel strategy.

“To compete in China, I think that it’s critical to adapt local technologies such as WeChat mini-programmes and to adapt existing technologies to local expectations,” cautioned Farfetch’s Robb. “The ecosystem in China is so different that you have to take a local approach.”

President Xi to open doors to investment but further tighten grip on the Internet. On April 10, President Xi Jinping made his keynote speech at the opening ceremony of the Boao Forum for Asia, an annual conference dubbed by some as the “Asian Davos,” which took place on the Chinese island of Hainan. Xi promised to broaden market access for foreign investors and foster an active investment ecosystem, amid escalating tensions that warn of a trade war between China and the United States.

Xi’s open-door investment promise coincides with his call for a tighter grip on online activity in China. At a cybersecurity conference that took place on April 21, Xi warned against a lack of control over China’s netizens and allowing “the internet [to] become a platform for disseminating harmful information.”

Xi’s hard-line stance was preceded by the latest wave of crackdowns on digital media. What has become known as a web “spring clean” has resulted in the censorship of “vulgar and violent content” on platforms such as Weibo, Toutiao and Douyin. However, it was a step too far when Weibo said that LGBT-themed content was also subject to the clean-up, sparking outrage and resulting in a statement that such content would be excluded from censorship. The increasingly frequent crackdowns are reasons for brands to be concerned: last June, WeChat removed 25 public accounts in an effort to reduce celebrity gossip, including the account belonging to Harper’s Bazaar China.

Balenciaga apologises after claims of discrimination against Chinese shoppers. A video documenting the rough treatment of a Chinese male shopper at a Balenciaga store in a Printemps department store in Paris has gone viral since it was posted on April 25. According to WeChat user Paituzhuli, who published the clip, the man was defending his mother, who was pushed by non-Chinese shoppers when she accused them of cutting the queue for Balenciaga's "Triple S" sneakers, resulting in an altercation in the store and a claim that security staff only handled the Chinese man. The video spurred accusations of racial discrimination and demands for a brand boycott, as it trended on Weibo, reaching 4 million views a day after it was posted.

Balenciaga issued a first apology on the day after, but it did not identify the customers to whom it offered the apology as Chinese, prompting further scorn among some Chinese social media users. The hashtag #BoycottBalenciagaDiscriminatesChinese spread across social media service Weibo, drawing millions of page views. On April 29, the fashion house issued a second, longer apology, announcing that it would introduce a new system for product launches to shorten waiting times and improve the shopping experience.

Forbes third annual 30-Under-30 Asia list names 59 Chinese innovators. China came second to India in the number of movers and shakers featured in the line-up, which named 300 people across 10 categories. Following 2017’s list, which featured 76 Chinese representatives including supermodel and BoF 500 member Liu Wen, this year’s honourees include key players in China’s luxury, e-commerce and tech sectors, from luxury handbag blogger and BoF 500 member Tao Liang (known widely as Mr. Bags) to Li Xiaoya, co-founder and chief operating officer of Huishoubao, a smartphone recycling start-up. Also on this year’s list is young womenswear designer Snow Xue Gao, a finalist in this year’s LVMH prize, and Chen Peng, who returned to show his oversized outerwear at Shanghai Fashion Week for Autumn/Winter 2018.

China's Top Court Rules for Dior in Trademark Case
The ruling comes as Beijing looks to play up its credentials for protecting intellectual property rights, after being stung by criticism that it does not do enough to protect against IP infringement.

SMCP's First-Quarter Turnover Lifted by China and US
The owner of French labels Sandro and Maje reported first quarter revenue of €252 million euros.

How Shanghai Fashion Week Got Its Groove
Buoyed by fresh talent, Shanghai’s fashion week is powering past regional rivals in Seoul and Tokyo, and ready to stand up to international scrutiny, reports Susanna Lau.

Tmall Boosts Dior, YSL Beauty Brands in China
While mass brands have an edge on China’s Tmall in terms of search visibility, prestige labels can fight back by investing in the right areas, according to a new report by research firm L2.

Walmart Opens High-Tech Supermarket in China
Customers will be able to use a mini programme on WeChat as they shop, and bypass traditional checkout counters by paying via their mobile device.

Alibaba to Invest $320 Million in Thailand, as Rivals Boost Presence
Alibaba-backed Lazada is already one of the most popular e-commerce businesses in Thailand.