The legislation was officially and almost unanimously approved by Chinese lawmakers on May 28. But beyond signalling an accelerated end to Hong Kong’s autonomy — and the civil liberties that are built into it — the law has also become a pain point in US-China relations, with Washington likely to downgrade the city’s special trading status and impose sanctions on unspecified individuals.

For companies and sectors traditionally reliant on revenues from Hong Kong, the news is just the latest in a chain of events that plunged hospitality and retail towards an unprecedented slump. The trouble began when protests kicked off last spring over a proposed extradition bill, sending tourism down 40 percent last August compared to 2018 (the year Hong Kong was crowned the world's most visited city) and driving retail sales to their ninth consecutive month of decline in October. 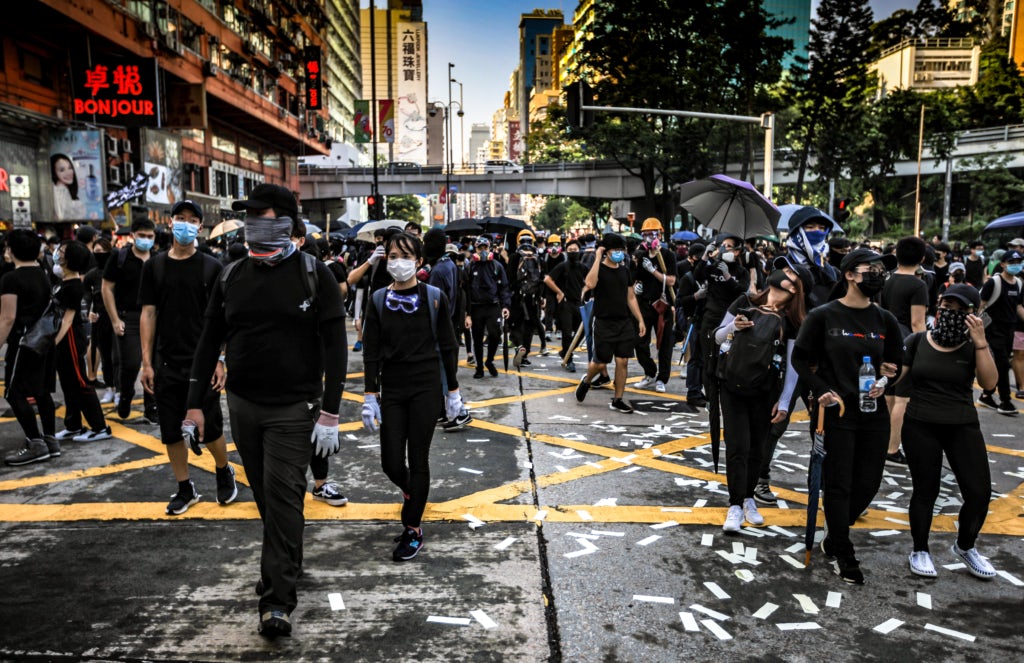 Protesters during the first round of demonstrations in Hong Kong | Source: Shutterstock

“Everything was good until the first round of protests,” said Fatma Shaheen, Founder and CEO of Skin Design, a London-based luxury skincare brand and clinic that partnered with retailer Lane Crawford in 2018 to sell its products in Hong Kong, with plans to eventually enter the mainland Chinese market. After their first year in the market, the goal was another 50 percent boost in sales.

Instead, after the first round of protests kicked off, Skin Design saw a 50 percent decline. Then came Covid-19, which forced the company to shut down its London clinic. Though Hong Kong’s government didn’t impose a full lockdown, the retail slump dragged on and following recent social unrest, businesses face an uncertain future.

“With anything political we just don’t know how long or when things will change,” Shaheen added. “Sales are not rising, let’s put it that way.”

Hong Kong’s retail sales dropped by 36 percent year-over-year in April — a slight improvement from the 42 percent figure for March and sign of post-pandemic recovery. But Retail Management Association chairwoman Annie Tse forecasted a “very challenging” June due to the resurgence of protests.

On the ground, there are signs of recovery among locals, said Divia Harilela, contributor to the South China Morning Post. “I see more people out and about, and I see people carrying designer shopping bags,” she said. “People are fed up and just want to go about their lives. The numbers [of protestors] are much smaller.”

But even healthy local demand won’t make up for a drop in shoppers from mainland China, who according to Mario Ortelli, managing partner of luxury advisors Ortelli & Co., made up 70 percent of luxury purchases before protests took their toll. (Hong Kong’s government has been in talks with mainland authorities to relax its ban on non-residents, but nothing has been confirmed.) For more than a decade, Chinese tourists propped up the city as a luxury and retail hub, but this status is slipping away.

The relevance of Hong Kong to the luxury industry has been declining for a while.

“The relevance of Hong Kong to the luxury industry has been declining for a while, and in my opinion this structural decline will continue,” said Ortelli. Alongside the ongoing decline in inbound tourism, an impending drop will dovetail with the accelerated repatriation of Chinese luxury spending to domestic points of sale.

As top-tier Chinese cities like Shanghai, Beijing, Guangzhou, Shenzhen and Chengdu gained prominence for luxury groups, the former British colony has lost some of its strategic lustre. Its status as a tax haven and gateway to the mainland drew luxury group’s regional operations and management offices to its shores. Now, said Ortelli, Chinese free trade zones offer similar benefits, and an increasing share of regional executives are based out of Shanghai to stay abreast with their target consumer.

After travel restrictions are lifted, one of Hong Kong’s remaining strategic draws will be its comparatively favourable import tax laws, which could continue to tempt tourists to cross the border for lower priced high-end goods. 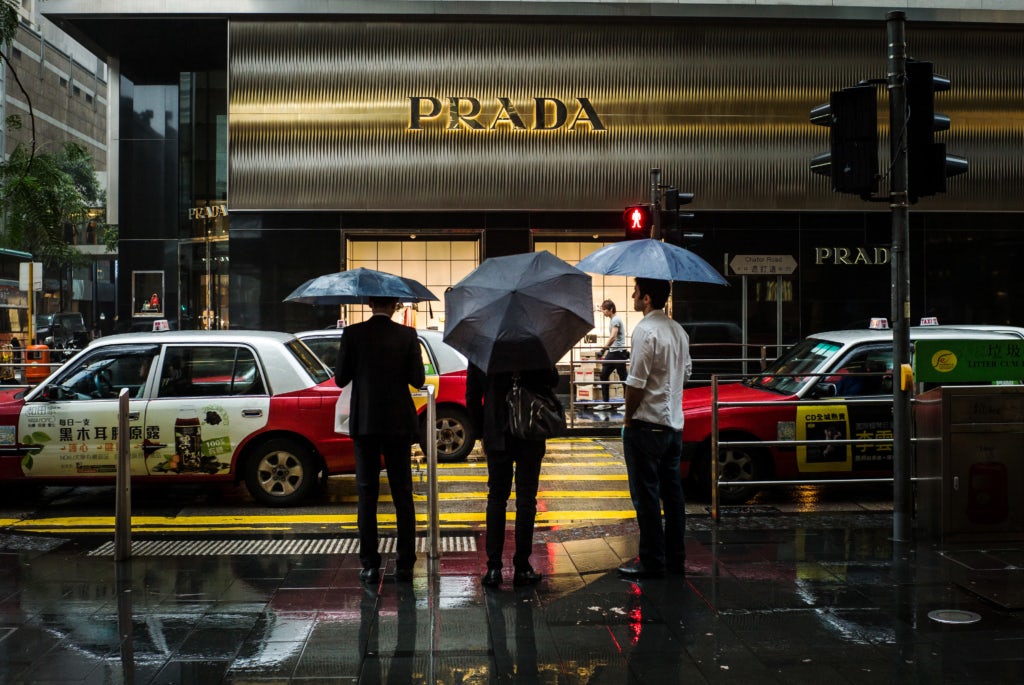 Pedestrians in front of a Prada store in the central district of Hong Kong, China | Source: Getty Images

For luxury players with stores in Hong Kong — many the result of store-opening sprees that catered to the city’s tourism boom over a decade ago — closures are almost inescapable. Bloomberg estimated that over 15,000 Hong Kong shops might close without rent relief. Harilela said that local customers could sustain a few stores, but likely not the number strewn throughout districts like Causeway Bay, Central and Tsim Sha Tsui.

Ortelli advises luxury brands to approach closures as a necessary evil. “Companies have to reconsider their footprints,” he said. “You probably don’t need nine shops in Hong Kong anymore.” He recommended brands focus their budgets to target repatriated spending in China, or nearby places like Macao, and work on improving efficiency and adjusting pricing to regain profitability.

During Hong Kong’s golden age as a tourism-fuelled luxury hub, its tax, regulatory and strategic benefits made it an accessible launchpad for fashion and beauty brands (like Skin Design) angling to dip their toes into the Chinese market. This dynamic has shifted too — a change accelerated by both Covid-19 and ongoing protests.

“We still want to do as much as we can [with] our presence in Hong Kong, but it naturally makes sense that we take the business faster into [mainland] China and grow our presence there,” said Shaheen. The brand is currently deciding on the right mainland e-commerce partner to launch with. “We want to reach our audience that can’t travel.”

For companies operating in Hong Kong, the market’s underdeveloped e-commerce ecosystem — years behind that of its mainland neighbour — has also been brought to the forefront since retail foot traffic took a nosedive. But ongoing strife has forced brands to act fast and get creative.

“Online activity is at an all-time high,” said Kevin Poon, co-founder of streetwear brand Clot and multi-brand store Juice, which has a store in Causeway Bay. According to Poon, both Clot and Juice (prior to the first round of protests) relied on physical retail for 90 percent of sales. “Now, it’s 50-50 and I feel like it’s gonna be 60-40 soon,” he said.

It naturally makes sense that we take the business faster into mainland China and grow our presence there.

Recently, Poon launched a 6,000 square foot e-commerce facility with livestreaming capabilities, which he plans to use to bring DJ sets and one-on-one talks on social media. Omnichannel has become a priority and the brands have also recently joined TikTok. Poon is optimistic that business will be strong this summer: with school cancelled for students in cities like London and New York, many of his target customers will be home for the summer.

Due to lockdowns elsewhere in the world, Harilela said, online shopping from global retailers like Amazon and Farfetch can mean long lead times and extortionate shipping fees. On a positive note, this has powered a drive to shop locally. “Local designers have done sales and are willing to send items to homes for people to try, so people are trying to help out that way,” she said, adding that shop assistants at luxury retailers Lane Crawford and Joyce are using WhatsApp to stay in touch with clients. Lane Crawford didn’t respond to a request for comment.

From Rankings to Retail

For now, Hong Kong has its logistical perks — from taxes to regulatory requirements — that could continue to attract smaller businesses. But like brands and retailers across the world post-Covid-19, those operating in the city will have to face a new reality. “People will keep on coming [here]. I don’t think it will be to test the market for China but for just for ease of operating a business,” said Harilela. 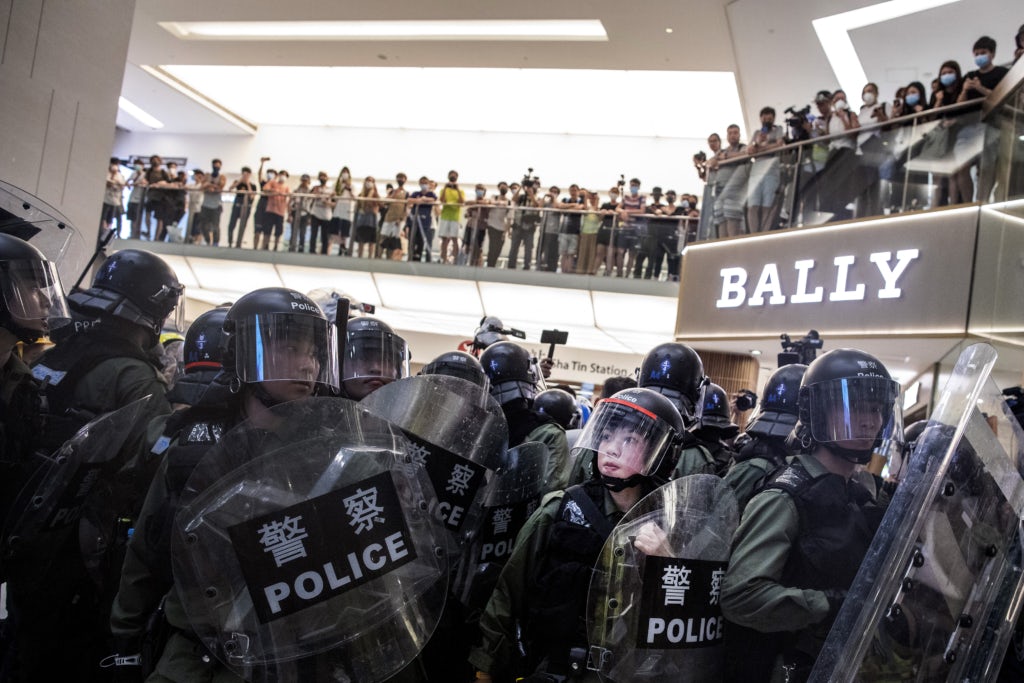 Last year, before the protests hit, Hong Kong placed third in the World Bank’s ease of doing business rankings, due to its attractive tax regime and pro-business environment. At the time, its commerce chief already warned that the protests could take a toll, but if the city’s autonomy continues to be eroded by the mainland, which ranked 31st, Hong Kong’s unique draws as a business hub (like its rule of law and gateway to China) could be lost.

Whether it will retain its status as a financial hub is already in doubt — in March, the city dropped three spots, falling behind Shanghai and Singapore in the Global Financial Centres Index. Shanghai overtook Hong Kong as the world's top initial public offering market in the first three months of 2020.

It doesn’t help that the city’s cool factor, and status as a place to watch for the latest trends, has paled. “[Mainland] Chinese would say, let’s see what’s going on in Hong Kong, the same way people here look to Tokyo,” said Harilela. Now, mainland China has its own creative heroes and influencers.

Putting the city's relationship with the mainland to one side, Hong Kong is still an important regional base for businesses in other Asia Pacific markets looking for a global hub. Experts like David Meyer reckon that Beijing will continue to position Hong Kong and Shanghai as global and domestic financial centres respectively, while Hong Kong-based financiers will stay committed to the city as their base. But whether it will regain its standing as a strategic hub for fashion’s luxury and retail players is now a question for Beijing to answer.