All Eyes on The United States of America

The Savigny Luxury Index regained some of the ground it had lost over June and July, increasing by 2.2 percent in August on the back of positive results announcements. The MSCI World Index also gained 2.2 percent as the debate over US interest rate rise rumbles on.

LONDON, United Kingdom — The Savigny Luxury Index (“SLI”) regained some of the ground it had lost over June and July, increasing by 2.2 percent in August on the back of positive results announcements. The MSCI World Index (“MSCI”) also gained 2.2 percent as the debate over US interest rate rise rumbles on.

• American brands have taken centre stage this month, with a flurry of largely positive results announcements. Ralph Lauren posted better than expected first quarter results driven by international expansion and growth in its e-commerce business. Coach beat estimates in its fourth quarter results thanks to international markets, where the brand has more pricing power than in the USA. Estée Lauder’s quarterly profit doubled helped by strong demand for new skincare and makeup products, also benefitting from advanced orders from retailers ahead of planned technology upgrades. Tiffany raised its full-year profit target for a second time, following better than expected quarterly sales and profits and higher prices for its high-end jewellery. On the other hand, Michael Kors’s historically racy valuation fell further in line with the sector despite a quarterly sales growth of 43 percent as the company announced its margins would shrink this year due to European expansion.

• Tod’s shares were temporarily suspended after the stock fell sharply on the back of disappointing results. The company was hit on all fronts: poor performance in China, adverse currency effects, the refurbishment of its Madison avenue flagship and continued hardship in Italy (which still accounts for one third of the group’s revenue), leading to a drop of 20 percent in first half core earnings. Tod’s is investing in new areas of growth such as accessories and menswear to extend its activities beyond footwear, which represents 75 percent of sales.

• Swiss watch exports grew by 2.2 percent in July. Exports to China however jumped 49 percent, driven principally by a free trade agreement between China and Switzerland, which came into force on 1 July.

• Shares in Brunello Cucinelli leapt 11 percent as the company forecast a double-digit growth in earnings and sales for both this year and next year. Strong sales in North America boosted first-half sales, while sales in its domestic market were held up by healthy tourist flows.

• Ferragamo's share price increased by over 6 percent as the company’s second quarter results beat expectations, helped by a strong rise in sales in Greater China and an unchanged performance in Europe, despite the loss of Russian tourist income owing to the ongoing Ukraine crisis.

• Luxottica’s shares fell by 3 percent as the expected exit of the CEO Andrea Guerra cast doubt over the company’s future direction.

Currencies remain a significant issue for most European companies, whose margins continue to be under pressure due to the relative strength of the Euro. US policymakers are currently debating a rise in interest rates; should this happen, this would strengthen the US dollar which would be good news for European luxury brands. 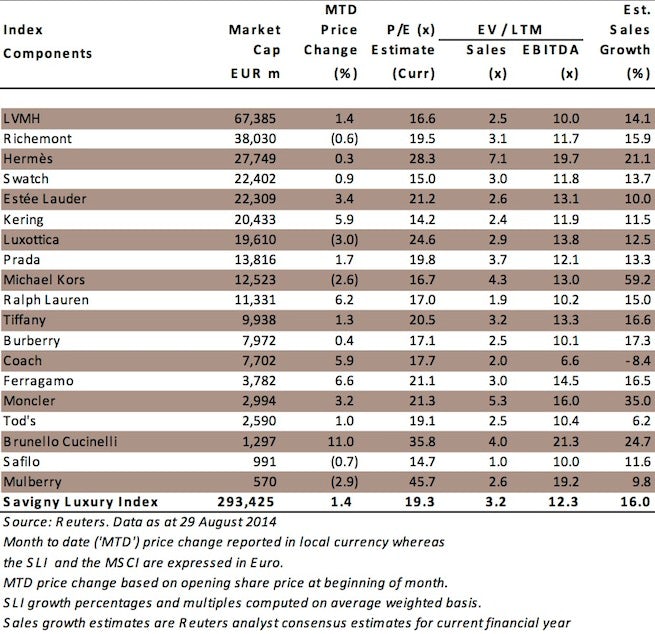