Mr. Bags Sells 3.24 Million RMB Worth of Bags in 6 Minutes

The influential fashion blogger is also collaborating with Montblanc on a limited-edition collection of women’s handbags, a new category for the brand.

SHANGHAI, China — Tao Liang has an unapologetic love for handbags. And he also knows how to sell them to his over 3.5 million readers on China’s biggest social media platform Weibo and more than 850,000 followers on WeChat, a microblogging messaging app.

In just six minutes, Mr. Bags, as Liang is better known, helped Tod’s sell 3.24 million RMB worth of handbags on his new Mini Program shop within WeChat, called “Baoshop.” The second collaboration between the Beijing-based fashion blogger and Tod’s, 500 pieces of the limited-edition “Wave” backpacks were created — double the amount from last year’s capsule collection.

Three-hundred of the canine-like handbags, a nod to the year of the dog being celebrated in China this year, pre-launched on Mr. Bags’ Baoshop in June. The handbags, each priced at 10,800 RMB (about $1,620), sold out within six minutes, generating 3.24 million RMB (almost $500,000) — a new record for the 26-year-old influencer. (His previous record was selling 1.2 million RMB worth of Givenchy handbags in 12 minutes in 2017.) 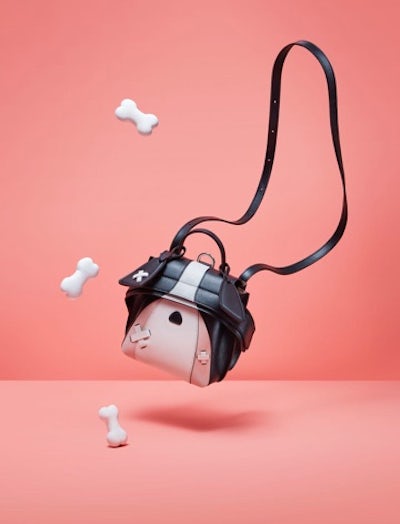 “China is a key strategic market for Tod’s and Mr. Bags, with his extensive and insider knowledge of this market and its customer, is the perfect collaborator for us,” a spokesperson from Tod’s told BoF. High-profile individuals from Zhang Zetian, China’s youngest female billionaire, to models like Liu Wen and Xiao Wen Ju and actresses Ouyang Nana, Guli Nazha, Sun Yi and Song Zuer, also wore the “Wave” backpack and posted images on social media, helping to popularise the style.

Now, Mr. Bags is readying for his next launch: a collection of limited-edition Montblanc handbags for both men and women.

The partnership came about, said Liang, after “many bag fans commented on social media, asking [for recommendations] for mini-backpacks that are classic, good-looking, affordable and practical.”

It will be the first time the stationery brand, which has recently been expanding its offering of leather accessories, has introduced handbags for women. It also marks the first time the company has collaborated with a fashion blogger. The capsule is designed for the Qixi festival — commonly referred to as Chinese Valentine's Day — which falls on August 17 this year. “We wanted to give it a modern interpretation,” said Montblanc’s creative director Zaim Kamal. A total of 497 pieces will be pre-launched on Baoshop, with prices starting at 4,800 RMB (about $717.1).

Liang launched Mr. Bags in 2012 and quickly became an arbiter of handbag taste among Chinese readers locally and internationally. Ranked #3 on Exane BNP Paribas’ 2017 list of China's most influential fashion bloggers, Liang uses his encyclopaedic fashion knowledge not only to keep his following informed about luxury brands and the latest handbag trends, but also to help mega brands understand what Chinese consumers are looking for in the latest “it” accessory.

Baoshop, which Mr. Bags launched last month, only sells exclusive or customisable products, and claims to be the first WeChat Mini Program in China to work directly with luxury brands and sell handbags costing over 10,000 RMB. “For me, the success of a project is not measured by how many bags we sold in a short period of time or how much revenue we generated. It’s really about how much impact it creates,” he said.

And there’s significant opportunity. Luxury goods purchased in China make up 8 percent of global sales, while Chinese shoppers — who make three-quarters of their luxury purchases overseas — drive 32 percent of the worldwide total, more than any other nationality, according to Bain.

While collaborations between fashion bloggers and companies are not uncommon in China, e-commerce partnerships through WeChat are growing as luxury brands become more comfortable with hosting sales on the social media platform. Recently, top Weibo fashion blogger Gogoboi launched a WeChat store, called Bu Da Jing Xuan (不大精选), where he curates and sells luxury goods from online retailers like Yoox and Farfetch.