“Obviously the underwear market is huge and quickly expanding, but it’s still very stereotypical and categorised,” says Alve Lagercrantz, who co-founded Sirloin with his business and life partner Mao Usami in February 2016. “You have the basic, the sporty and the sexy… There’s no underwear that’s telling a more intelligent story. Our idea was to create collections where underwear is completely integrated into the collection.” As a result, Sirloin’s collections are heavy on jersey and knitwear, with the garments being influenced by the unique technical construction elements of undergarments.

It's a far cry from the couple’s background in traditional womenswear. Born in Stockholm, Sweden, Lagercrantz studied fashion at the Antwerp Royal Academy of Fine Arts in 2006, before enrolling in the womenswear course at London’s Central Saint Martins three years later; while a student, Lagercrantz interned at Louis Vuitton, Gaspard Yurkievich and Manish Arora. Following a foundation year in fashion and product design at the Kyoto University of Art and Design, the Japan-born Mao enrolled at Central Saint Martins, which is where the two met.

The designers quickly received critical acclaim for their individual work. In 2012, Mao was granted the LVMH Grand Prix Scholarship and the L’Oréal Professional Young Design Talent award in 2013, the same year Lagercrantz won the Sally Woodward award. The exposure landed Mao a job as a leather goods designer at Louis Vuitton under Nicolas Ghesquière, while Lagercrantz took up a position in womenswear and embroidery at Dries Van Noten. 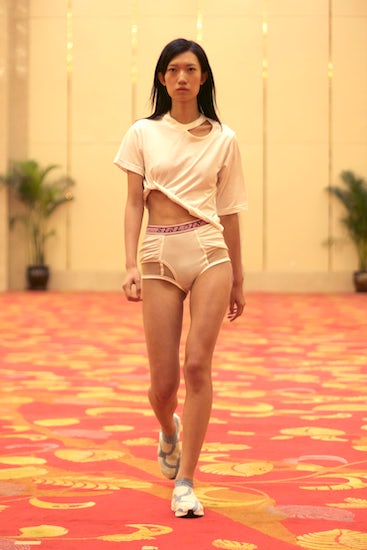 “Being at Dries was really amazing because it’s a company that is big, but you can still see how all the different departments are working together, which helps me a lot now starting my own business,” says Lagercrantz, who left Dries Van Noten after three years to start Sirloin. “We came to a point where we could go to the next company, but we both felt that if we ever wanted to start the label it was now.”

Shortly after founding Sirloin, the duo moved to Shanghai to be closer to their production facilities. “Our design motto is called ‘Stupid Elegance’. We like something charming but slightly off, like a little mistake which makes it interesting,” explains Mao. “There’s this general attitude of easiness… We try to give our brand the feeling of being home alone in your underwear on the bed,” adds Lagercrantz.

“Being based in China, we always tend to pick up on small funny things that we see in daily life. Shanghai has a really interesting toilet culture, where people hang out and smoke cigarettes,” says Lagercrantz. “In general, this idea of what is considered private and public is more merged. Shanghai is very famous for people wearing pyjamas and even underwear on the street.”

Following the presentation, the designers were approached by nine stockists, including Lane Crawford, Opening Ceremony, Machine-A and a handful of Japanese menswear boutiques, which were attracted to Sirloin’s unisex aesthetic. “What’s exciting is that we’ve not only gotten new shops but our current shops have also almost doubled their orders,” says Lagercrantz. The brand currently has 15 employees, who work across production and sales.

This week, Sirloin will re-present its second runway collection during Shanghai Fashion Week in an attempt to spark momentum in the Chinese market. “Being in Shanghai remains difficult exposure-wise. What’s considered mainstream here is very different than in other countries. To avoid a gap, we need both Chinese and international presence,” explains Mao.

For this month’s Spotlight, the designers have created a custom BoF logo that plays on the brand’s “Stupid Elegance” design philosophy. “As we’re embracing imperfection, our logo is also based on it. We’ve taken classic typography, which is slightly off from a perfect circle.”

Looking forward, Lagercrantz and Mao are focussed on taking their brand to a wider audience. “Our story of underwear to outerwear is quite a new concept for a lot of shops… They’re intrigued, but big department stores aren’t sure if it should be [merchandised] in the underwear section or beside the ready-to-wear,” says Lagercrantz. Mao agrees: “[Ultimately] we want to mix the industries between fashion and underwear.”

As China Cools, Lingerie Heats Up

Inside the Economics of Your Underwear