The Year Ahead: It's Time to Look Beyond China

As some successful players become over-reliant on China and others struggle, companies should consider spreading their risk by expanding to other high-growth geographies.

LONDON, United Kingdom — Fashion brands have long targeted China as an outstanding growth opportunity. And rightly so. Over the past 10 years, China accounted for 38 percent of global fashion industry growth across segments. Since 2012 it has been responsible for an impressive 70 percent of expansion in the luxury segment, and we expect this dominance to continue out to 2025.

Indeed, some brands have been very successful in China. Luxury players such as LVMH and Gucci have already been in the market for years, having first opened stores in the 1990s. Both continue to see positive results; LVMH saw “unheard of growth rates” in 2019, while in February, Kering defied market concerns of a China slowdown in luxury, with Jean-Marc Duplaix, the group’s financial director, highlighting the “dynamic” sales from their Chinese clientele. Other international brands also continue to perform well — Lululemon grew China revenues by 68 percent in the second quarter of 2019, while Nike and Uniqlo reported strong demand. Mass-market players have also prioritised China as a core part of their business models; China now accounts for 5 percent of H&M’s global revenues, while Inditex has over 600 stores across the country, making up over 8 percent of its store network.

Still, not everyone has been so successful. Asos and New Look are recent examples among those to have retreated. Dolce & Gabbana and Burberry are among players that have been in the press due to advertising campaigns that mismatched the sentiment of Chinese consumers.

Some international mass-market brands have struggled to compete against established Chinese brick-and-mortar players, some of which have thousands of outlets. Physical retail still plays an important role — 85 percent of shoppers engage with both online and offline touchpoints, compared with 80 percent in 2017. Local Chinese high-street brands such as Urban Revivo and Peacebird have been growing at pace in the region, ramping up competition for foreign brands. 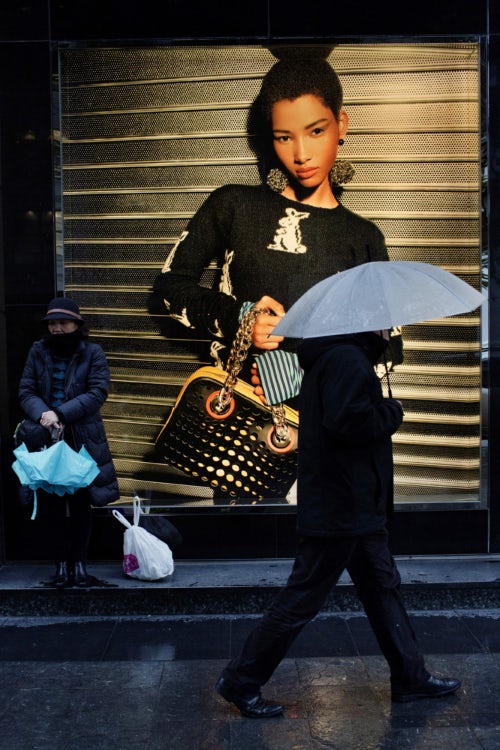 The bottom line? The path to success in China can be elusive. Nonetheless, despite a slowdown of economic growth, the official growth forecast of 6 percent to 6.5 percent for 2019 is still among the highest of major global economies, and the region this year (2019) overtook the US as the largest fashion market in the world. Consumer-driven consumption is still fast growing, in a country that adds absolute gross domestic product (GDP) equivalent to that of the entirety of Australia to its economy each year. Furthermore, as incomes rise, Chinese consumers show a strong propensity to trade up, which on the whole is good news for upmarket foreign brands. Yet, winning in China cannot be the sole focus, and it makes sense for brands to direct at least some of their attention toward other smaller, yet high growth markets.

India continues to present an exciting opportunity, as we highlighted in last year’s report (“Indian Ascent”), particularly for price competitive players. While GDP growth this year has been somewhat weaker than expected, in part due to regulatory uncertainty, India is still projected to be the fastest-growing major economy, according to the IMF. The Indian clothing market will be worth $53.7 billion in 2020, making it the sixth largest globally.

Notwithstanding the market’s challenges, international players from H&M to Adidas are engaging with India enthusiastically. Internet retailing accounted for nearly 11 percent of the apparel market in 2018, double the proportion just three years prior, driven in part by increasing internet and smartphone penetration. In fact, India saw the strongest absolute growth globally in the number of internet users in the past year. Social media use is expanding at around 25 percent annually, with nearly 70 percent of users active on Instagram. This is providing a platform to introduce consumers to fashion brands away from the dominant informal market.

Southeast Asia also provides significant opportunities; at nearly 270 million people, Indonesia is the fourth largest country in the world by population. Vietnam and the Philippines are seeing rapid GDP growth. Across Southeast Asia, the median age is just 29, against 37 in China, highlighting the potential for growth as large numbers of young people enter the workforce each year. As in China, demand is being driven by digitally native consumers, excited by the possibility of creativity and self-expression. It is worth highlighting that these countries are highly diverse; some consumers in the Philippines have a high affinity for western fashion trends, while Indonesia is due to be the largest modest fashion market in the world. Given the wide spectrum of taste within each country and the differences in regulation between countries, each of these markets alone can lend themselves as part of a considered expansion strategy for success at scale. Equally, brands can explore a regional approach to establish a toehold and gain from the regional economy of scale. 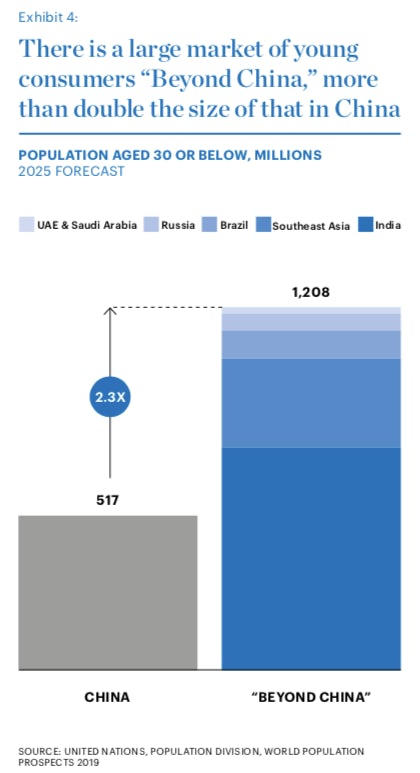 Russia is an interesting proposition; distracted by headlines about geopolitics in recent years, the country’s fashion sector has remained largely ignored by international fashion media. Yet Russia’s clothing market is worth close to $30 billion annually and is the ninth largest in the world, according to data from McKinsey FashionScope. Despite recent economic slowdown in the country, the luxury market is showing new signs of stabilisation. In 2018, LVMH, Dior and Tiffany all reported the highest sales in the region since 2014. An increasingly budget-conscious middle class is creating new opportunities for price competitive players. Russians have embraced e-commerce too, which grew at an impressive 26 percent year-on-year in the first half of 2019. The attractiveness of the country is also being boosted by growing numbers of Chinese tourists, who are expected to spend US $1.1 billion in Russia in 2019.

Elsewhere, Brazil has been overlooked by many in recent years, amid see-sawing economic growth in the world’s sixth most populous country. Still, McKinsey’s 2019 Global Sentiment Survey highlights increased confidence among Brazilian consumers. Tariffs are a challenge — Brazil has 23.3 percent tariffs for textiles, according to the World Trade Organisation, but there are still opportunities. “More and more international brands are looking to enter Brazil,” says Christoph Barchewitz, co-chief executive of emerging markets e-commerce platform Global Fashion Group, which operates the Latin American fashion e-commerce site Dafiti. “We recently supported Ralph Lauren and Banana Republic launching [digitally] into the market, and are speaking to others.”

Finally, the Middle East still has potential, despite being an already well-established fashion market with a strong mall culture. While the Gulf countries are far smaller than China in terms of population size, the propensity of its shoppers to spend big is what gives the region an outsized role among international markets. In fact, the average consumer in the UAE and Saudi Arabia respectively spends over 6 times and 2 times as much on fashion as the average consumer in China. Some 99 percent of the UAE population uses social media, underscoring the presence of a connected, aspirational population craving style inspiration and global fashion. The model in the Middle East is different given historical restrictions on foreign ownership: international fashion players habitually partner with established and tried-and-tested local players, the likes of whom have worked with brands from Louis Vuitton to H&M for years. These include Alshaya, Al Tayer and Chalhoub. One largely untapped opportunity for overseas brands to explore is how to better serve the region in terms of e-commerce, given many franchisees don’t own brands’ digital rights.

As fashion players continue to find the right formula for China, other international markets provide a rich seam of potential. That’s not to say that China’s fashion market is nearing saturation. Far from it. In 2020 we expect to see many companies continuing to seize opportunities and grapple with complexities there. Those that get it right will prosper. But successful players
and struggling players alike will do well to remember there are also opportunities elsewhere. As fashion players put themselves to test in these growth markets, they will have to strengthen their brands and upgrade their operations to be able to create value.