SHANGHAI, China — “The way we go about getting things done is very methodical. We deliberate over things again and again and then refine them to suit our needs. We’re not like other media groups, chasing blindly after any new novelty.” So says Vogue China editor-in-chief Angelica Cheung, who recently celebrated the tenth anniversary of the Condé Nast magazine that has become a style bible for millions of women across China.

Cheung believes a considered approach to interpreting new trends and fashion talent for the local market is just as important as the speed with which it adopts them. “Hence we’re yielding better results than the competition,” she asserts.

With a readership of over 1.3 million, Vogue China’s place near the top of the country’s fashion media pecking order is something that most fashion observers take for granted, but if the magazine needed a stage to prove it, last week’s anniversary event was it.

These and many more had flown in from around the world for the party. And while Cheung seemed genuinely pleased to be fielding their many congratulations, she says she isn’t the type who liked to celebrate past achievements at soirées such as the one she was hosting. Likening her stance to that of Karl Lagerfeld — who famously dismisses the past — Cheung says the only decade she is interested in is the next one. 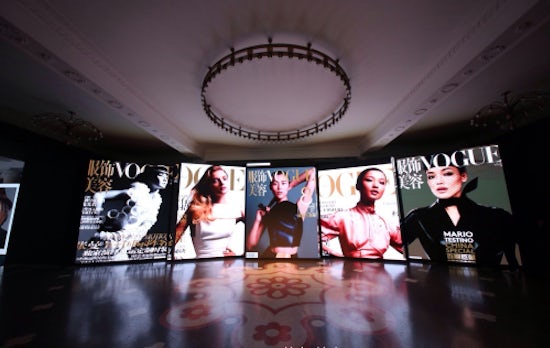 “How meaningful is it to brood on our accomplishments?” she asks. “The time to do that is when you’re 80, when there’s nothing else left to be fulfilled. Right now, I pursue the future. It’s the only thing I’m working hard to achieve and it’s everything I’m mulling over in my heart. It feels to me that Vogue is unveiling a brand new chapter now, one of a holistic expansion,” she adds.

Cheung began shaping her vision for the magazine soon after its 2005 debut. “We wanted to highlight our own identity [and] to differentiate ourselves from the other editions of Vogue. In our magazine, we talk about positive, forward-looking women who uphold our society’s ideals,” says Cheung. “It is as important for the reader to be encouraged, to cultivate a sense of self, as it is to be told where they can buy the prettiest frocks.”

Ten years after the launch of Vogue China, Condé Nast International CEO Jonathan Newhouse, praises Cheung’s success: “Angelica is a brilliant representative of Vogue China. She has become the personification of Vogue in China and, indeed, of Chinese fashion itself,” he says. “She’s widely sought out by fashion brands and luxury houses whenever they seek knowledge and understanding about what’s happening in the market. There are few individuals who have done so much to promote the fashion industry in their markets as Angelica has done for China.”

Having been born into a family of diplomats, it is little wonder that Cheung has become a fashion ambassador for China to the outside world. As an advocate for the likes of Uma Wang, Huishan Zhang and Chen Man, Cheung has helped bring Chinese designers and photographers to the global stage.

Tasha Liu recalls the time Cheung paid a visit to Dong Liang, the Shanghai store Liu co-founded. “[Angelica] vetted every single piece of design by our Chinese designers and told us to keep doing what we are doing. She quickly came up with a Chinese designer-themed issue and dedicated two pages worth of editorial to our humble store. That brought us so much encouragement,” says Liu.

Huishan Zhang likens Vogue China to “a bridge traversing Western and Eastern aesthetics” with Cheung at its centre. Thanks to the support of Cheung and her team, the young designer now shows at London Fashion Week and was engaged by Barney’s New York to design an exclusive capsule collection. 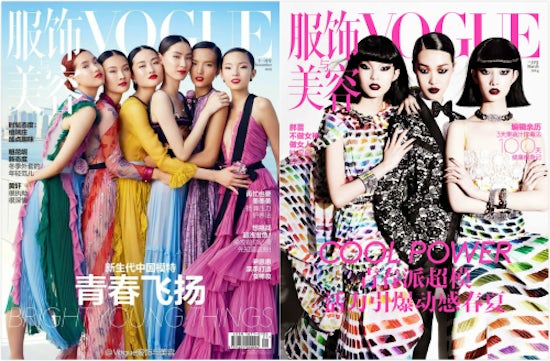 “Vogue China plays an important role both in the local and international fashion industry,” says Felix Chang, the managing editor for Asia-Pacific at Models.com. “Not only for designers, but also for their unwavering support for Chinese models — they have undoubtedly propelled Chinese models like Du Juan, Liu Wen, Fei Fei Sun and Xiao Wen Ju to success.”

Cheung has also played the role of market mentor and navigator for international creatives coming to China. She recently posted a picture on Instagram with London-based designer and Loewe creative director Jonathan Anderson with a caption that read: “Looking forward to introducing him to Beijing.” And when Gucci’s creative director Alessandro Michele and Love editor-in-chief Katie Grand were recently in Shanghai for the opening of the Gucci-backed ‘No Longer/Not Yet’ exhibition, it was Cheung who held a private banquet to welcome them.

Indeed, it has been Cheung’s cosmopolitan approach and the many roles she occupies beyond the strict function of editor-in-chief that have helped contribute to Vogue China’s standing as one of the most commercially successful international editions in the Vogue franchise. While this success may seem like a foregone conclusion, given the established cachet of the Vogue brand and the sheer scale of the Chinese market, it is worth remembering that the title was a late arrival to the once isolated country, when compared to competitors like Elle, Cosmopolitan and Harper’s Bazaar.

One strategy that helped Condé Nast China accelerate Vogue past many of these forerunners was an unwavering focus on digital. “Vogue is the number one fashion brand in terms of fan volume on WeChat, which is the leading social media platform in China,” Newhouse explains, pointing to the brand’s 560,000 users on the platform. The three Weibo accounts affiliated with the magazine — Vogue.com.cn, Vogue China and ‘Angelica Cheung’ — have a combined strength of 5,500,000 followers.

The multi-channel approach is critical to the continued growth of the brand, says Condé Nast China’s president Liz Schimel. “During Vogue China's next ten years, we will scale our powerful cross-media ecosystem and leverage the power of mobile media to deepen our own and our clients’ connection and interaction with consumers throughout China's expanding urban centres.” 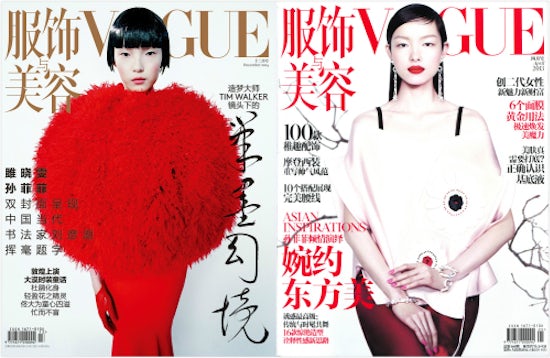 “Our content will be increasingly mobile, social, video driven and viral,” she adds. “The Vogue network is truly global and Chinese consumers are increasingly global in outlook — I see tremendous opportunities to leverage this phenomena in exciting new ways for Vogue China and our partners.”

“Next year, we will drive the Vogue Mini brand into a print magazine format, creating a new magazine tailored for a younger generation of readers in an attempt to start a conversation with them,” says Cheung, referring to the Vogue China sub-brand which targets teenagers and currently exists as an app. “I wouldn’t consider this product as something that was born entirely out of commercial motivations. It’s in response to the needs and requirements of the market and our attempt to draw in the teenage readership. Only after [its launch] will we start talking about advertising and the like,” Cheung adds.

“Although we’ve discussed many practical directions [that Vogue Mini magazine will take] — for example what to wear, what to do and what our closest girlfriends should be talking about — the ultimate aim is to encourage readers to experiment, find and understand their individual personalities. And from there, to grow in confidence, reliability and composure,” Cheung continues. “I hope [the reader] will learn to take charge of her own life, and make her own decisions in all things, and not try to appear like someone she’s not.” In its initial stage, Cheung says that Vogue Mini magazine will be quarterly to reflect the four fashion seasons. If the early response is good, she will then consider increasing its cycle beyond four issues.

Vogue Mini’s mobile app features an avatar, Miss V, inspired by Angelica Cheung’s signature bob hairdo. Cheung jokingly says that her daughter might have been the mastermind behind the character and that she is grateful the avatar takes a few years off her real life persona. But she says that she is still deliberating whether the character should be brought over to the Vogue Mini print magazine. “It’s a character that only the fashion industry would recognise, I think,” she says. Some may beg to differ. After a decade in the driving seat of Vogue China, her image has already been etched into the minds of many outside the fashion industry too.

But Vogue China faces a challenging road ahead. As media habits shift, the magazine, like others, must figure out how to transform millions of dollars of print advertising sales into digital revenue. What’s more, as China’s economy slows, the luxury fashion market is being hit hard, leaving magazines like Vogue scrambling for dwindling marketing spend.

To confront the challenge, Cheung has found other ways to service advertisers, increasing Vogue China’s focus on creating branded content. She points to a campaign the publication developed for Chinese telecom-equipment behemoth Huawei, when the company released a new smartwatch earlier this year. As part of the campaign, Karlie Kloss and Sean O’Pry were cast in a series shot by Mario Testino, which featured a unique watch face, designed by Barnaba Fornasetti, that became a VIP gift item. “It’s a matter of using Vogue China’s unique point of view and our understanding of each brand to devise the best possible outcome for everybody.”