SHANGHAI, China — Within minutes of meeting someone new in China it’s likely you will connect on the country’s most ubiquitous social media app, WeChat. With over 800 million monthly active users, the app is not only used for keeping in touch with people (and increasingly brands) but also for making all manner of transactions from buying coffee to booking taxis.

According to the 2016 WeChat Data Report, 200 million users of the platform have linked payment cards with their WeChat accounts and 34 percent of users spend over 500 RMB (about $72) per month, six times more than last year, via the service. Driven by services like WeChat Pay and Alibaba’s competing Alipay, the value of Chinese third-party mobile payments more than tripled last year to around $5.5 trillion, according to estimates by iResearch in China. In a very real sense, the smartphone is on the verge of replacing the wallet in Chinese society.

“There are two main ways to sell via WeChat and the distinction between the two is a bit blurred. One is the off-the-shelf WeChat store. These are template stores provided by the likes of JD.com, which obviously has a Tencent affiliation, or other third-party interfaces like Weidian. You can just plug these in and go,” explains Jonathan Smith, chief executive of Hot Pot Digital, a digital marketing agency specialising in the Chinese market.

“The second way is to integrate WeChat functionality into their existing mobile commerce functionality,” he adds. "What happens here is that you click through but it feels integrated into Wechat for the end user. The problem… is that off-the-shelf stores are not very brandable so for major fashion and luxury brands, the second option is usually the better one — but off-the-shelf is of course quicker and easier. If you integrate via API, then you have the added advantage of browsing and paying internally.”

There are 900 million WeChat users. This means opening a WeChat shop is inevitable.

Fashion brands that sell on WeChat can offer a seamless path to purchase where the shopper never needs to leave the comfort or convenience of the app. This is important because many Chinese consumers have become ‘super users’ of the app. According to the 2016 WeChat Impact Report from Tencent Penguin Intelligence, the number of users who use the app more than 30 times per day is rising fast, from 25 percent in 2015 to 36 percent last year.

More broadly speaking, Tencent, the Chinese technology giant behind WeChat, is making it easier for international brands to do business in China, bypassing licence requirements if business is only carried out on the platform. Attempts are also being made to offer Chinese customers the ability to use WeChat for purchases outside China so that they can shop at brands’ stores while abroad. WeChat has long been used as a valuable marketing tool to bolster sales, but is a dedicated WeChat shopping platform the answer for brands trying to capture more of the Chinese market?

More than a few highly influential fashion insiders seem to think so. Ye Si, the celebrity fashion blogger better known as Gogoboi says he uses his WeChat account to sell luxury goods from e-commerce sites and stores including Yoox, Farfetch and Harrods.

“My WeChat shop has just started, so most of the traffic comes from my WeChat articles [but] my real starting point was to provide more convenience for my readers anyway. Whether they’re shopping on a brand’s official e-commerce site or on Taobao or wherever, they need to go through too much hassle in the shopping process. Now, without leaving WeChat, you can shop with one click. Besides, with my recommendations, it’s a good guarantee that they won’t end up buying ugly stuff,” says the blogger famous for his sharp tongue.

“Look, according to the latest reports, there are 900 million WeChat users so basically all the brands have their target audience there. This means opening a WeChat shop is inevitable. Luxury sales haven’t been ideal in other channels over the past couple of years, so WeChat could be a turning point,” Gogoboi offers.

“And WeChat has better tech support now too. Not only can you use H5 [HTML 5] but you can also use mini-apps, providing better customer experience. Burberry has one now, for example, and many others are planning it too.”

Burberry launched WeChat commerce in September 2016, in line with its ‘see now, buy now’ initiative. It recently partnered with Mr. Bags, a popular fashion blogger on WeChat, for the DK88 handbag launch. Mr. Bags selected the colour ‘Bright Toffee’ which was then made exclusively available on Burberry's WeChat for the Chinese market. 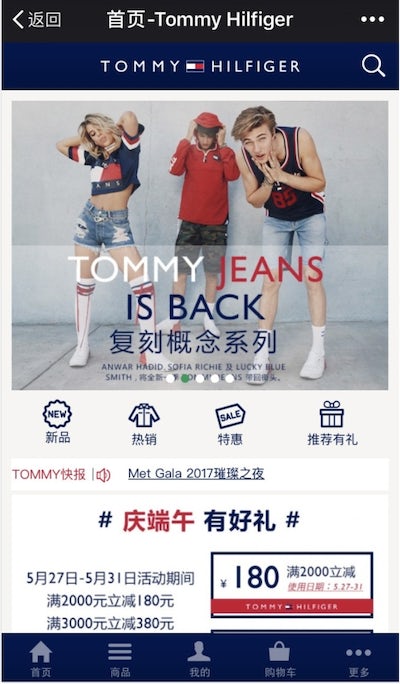 “China is a high growth potential market for our brand, and WeChat is one of our most important social media channels in the country. We continue to test and evolve our approach for engagement, brand storytelling and commerce opportunities,” says Avery Baker, chief brand officer for Tommy Hilfiger.

According to Smith of Hot Pot Digital, Tommy Hilfiger’s strategy is a success so far. “They started really early on and the store is a very good extension of the brand website. They have good customer service, including features around tracking orders built in from the outside,” he says.

Another insider who is enthusiastic about the channel is the designer Momo Wang, founder of the label Museum of Friendship which shows at Shanghai Fashion Week. She started a WeChat store a year ago as a more localised and individual offering than Taobao, China’s answer to eBay.

“I believe WeChat will have more features in the future but for now it’s like your own world that you can decorate. It’s a private space; it’s our own little territory. It’s now our only online shop so it’s very important for us,” says Wang. In a daring move, she avoids all other Chinese e-commerce sites for her second line including Alibaba’s Tmall, choosing to sell exclusively on her own WeChat store.

Wang says that complementary social media strategies on platforms such as Weibo and Instagram help drive consumers directly to her WeChat store. “We have several individual WeChat accounts for personal customer service; we let customers add our personal account and upload news, so this adds to our strategy.”

Since WeChat is essentially a closed system where you must be connected to access content, this blending of brand and personal accounts is a seamless way to direct traffic to dedicated stores. Tasha Liu, co-founder of Chinese retailer Dong Liang, also uses personal accounts alongside their WeChat store. Liu explains: “the entrance is quite specific, people usually enter the shop after following a WeChat account instead of searching on the internet. Compared with Taobao it's more like destination shopping.”

An evolving sales channel not yet for everyone

While the WeChat store seems to work well for young designers and domestic brands, not all high-end and global brands have embraced it as fully as Burberry or Tommy Hilfiger. H&M has operated an official WeChat account since 2014 but the company does not refer to any promotional offers there as an "optimised store" since products featured there have hyperlinks to the online store, which is either on the H&M app or hm.com. Similarly, products for sale on Coach’s WeChat channel are actually redirected to china.coach.com.

Jerry Clode, head of digital and social insight at Resonance, a Shanghai-based social media agency, believes that global brands should deploy WeChat stores tactically, as part of an overall sales ecosystem. Using Dior as an example, Clode outlines how by launching hero items, specific bags or collections at targeted times of the year, the brand generates huge amounts of conversation on WeChat, which can lead to more subscribers.

“In this way, brands are not relying on WeChat stores to get consistent sales, but they are used as a tactical marketing initiative which is timed over a year calendar,” he explains.

But not everyone is so enamoured with WeChat stores. Ian Hylton, chief executive of Xiamen-based luxury brand Ms. Min dismisses it as a “five-minute wonder”. He sees it for selling on the lower end of the scale. “It’s definitely not for luxury,” he says. “In China there are so many different people trying to get your attention. How many vehicles can you have for selling? [In] how many formats can you show yourself properly as a brand?”

For now, Ms. Min will stick with online sales via Taobao and Tmall. Younger designers like Feng Chen Wang and Leaf Xia are also hesitant. Wang says she simply doesn’t have the resources to put into a dedicated WeChat store whereas Xia cites the limitations of the app as reason for abstaining.

While enthusiastic about the possibilities of WeChat, Makin Jan Ma, an independent brand in Hong Kong, still hasn’t taken the leap. Brand manager Louis Wong explains that the effort and budget required to open a store make it less appealing for now. “To open a WeChat store you need to spend time responding to online customer service and you need to update information regularly. You also need to prepare an amount of stock to sell, and so far we don’t have that much of a budget to run an official WeChat store.”

WeChat retail is still very much in its infancy and will continue to evolve within China’s dynamic digital ecosystem. As Jonathan Smith observes, “it’s been two years since brands have been able to open WeChat stores. It really looked like a game changer, and while there are brands doing well it hasn’t really been the monumental shake-up of China retail that we had been expecting. A lot of brands are building up their WeChat fanbase but then they’re not completing the puzzle with e-commerce.”

The future success of WeChat commerce lies in the ability to tie in with offline retail, Smith suggests. “This would be particularly effective for someone like H&M that has a significant physical footprint to leverage. Of course, users can already pay in store using WeChat, but much better would be the ability to browse or try on in offline retail, then scan items via WeChat to access within the WeChat store and save to a cart or wishlist and check out.”

Whether or not the WeChat model evolves into a lucrative revenue stream for global brands remains to be seen but, depending on company scale and price point, WeChat stores could yet prove to be a meaningful way to supplement existing sales strategies in an increasingly competitive market.