NANJING, China — “You want to be cooler? You come to us,” says Liang Chao, the man behind what some consider to be China’s foremost youth culture empire. Few can deliver on such an overworked slogan, but the founder and chief executive of Yoho! has done so for over a decade, gaining the respect of many fashion industry insiders along the way.

Liang has cultivated a platform that caters to China’s booming youth market using a multi-tentacled approach — one that is part e-commerce, part publishing, and part events business. Yoho!’s rise also chimes well with the emergence of a new breed of young, cool Chinese Gen-Zs who are putting Chinese street style on the map.

The Nanjing-born entrepreneur was an early proponent of the hybrid business model, but Yoho!’s real success can be explained by the unparalleled sense of community that Liang has managed to create. While Yoho! does look to streetwear trailblazers in Tokyo, London, New York and Seoul to keep up with trends, it is China’s own urban youth culture tastes that are driving much of the company’s brand identity.

“I always hoped that one day our young people on the mainland would become as cool as the kids in those other cities, shining with their own personalities and styles,” Liang explains. “This is what we’ve been working on: introducing the elements of a streetwear lifestyle with a global vision to young Chinese people and helping them find their own styles.” 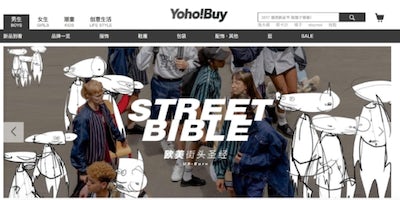 Excitement was especially high this month at Yo’hood, the company’s flagship trade show-meets-festival showroom, with an appearance from American musician and all-round polymath Pharrell Williams. Williams was invited to Shanghai to celebrate the fifth anniversary of the event; his presence also locked down the international cool factor alongside Chinese celebrities like Shawn Yue and JJ Lin.

Nigo, Japan’s so-called “godfather” of streetwear, has been working closely with Yoho! for over two years and Williams, who has previously collaborated with Nigo, was invited to the event at his request. The singer was on hand promoting Nigo’s new brand, Human Made, which is selling exclusively on Yoho!’s e-commerce arm Yohobuy!. According to Liang, it was also a way for Williams to see first-hand how indispensable Yoho! is among plugged-in, Post-'90s generation.

“Yoho! started as a fashion magazine in 2005. Now it's a successful multi-platform, hybrid model,” explains Elayna Li, digital advertising manager at Hong Kong-based internet company Qihoo 360. According to Qihoo 360's Shangyi data report, for the past three months Yohobuy! has had around 250,000 website visitors per day.

“Yoho!'s WeChat and Weibo accounts have both over a million followers so it’s definitely a market leader, and the brands that they carry are well tailored to what the market is looking for,” adds Li, who is herself a fan. “It's the fashion bible in the Chinese Millennial's hearts. I started to read Yoho! when I was in seventh grade.”

Such loyalty to the community is echoed by Min Wu, a Chinese creative from Souzhou who runs her own fashion label called 5min. “I’ve known about Yoho! since I was in school,” she says. “I check their WeChat every morning for stories and gossip. For me, Yoho! is not like a [typical] shopping website. Actually, it’s quite relaxing and entertaining,” adds Wu, who is now selling her own brand on Yohobuy!

Unlike many of the behemoth e-commerce companies of China, Yoho! is focused on serving one consumer: China’s trendy youth.

While Yoho! might seem to be little more than a Post-'90s escapist platform for hipsters to keep up to date with A-list Asian idols like Kris Wu and Kiko Mizuhara, or to window shop for cult labels, it is in fact a highly strategic, layered business model acting as a honey pot for the fuerdai, or wealthy second generation, and other Chinese consumer youth demographics.

“Yoho! is connecting deeply with the young Chinese Post-'90s generation by being an early market entry,” says Sandy Chu, WGSN’s editor of Asia, retail and buying. “By cultivating the market before a major demand existed, Yoho! has become a market leader with a local edit that truly understands what defines the country’s globally informed sense of cool.”

Liang ensures integration into the local scene by working with market-specific, homegrown designers like Feng Chen Wang, as well as international brands like Nike, Adidas, Rip N Dip, KTZ, Puma and Stüssy. Product selection from the same brand often differs from giants like JD.com and Tmall because the vast majority of products are sold exclusively on Yoho!. For example, Adidas Originals launched its NMD series exclusively in China on Yohobuy! last year.

Yoho!’s organic expansion into different verticals is down to the fact that Liang listened to the Yoho! community and was flexible enough to allow it to drive the direction of its expansion. “We follow what the customer needs,” explains Liang. “From day one, we evolved because our customers pushed it forward.” Today it sells and collaborates with over 150 brands.

According to the company’s 2016 figures, the e-commerce arm of the business generated revenues of about 2 billion RMB (approximately $306 million). The media division brought in just under 100 million RMB (approximately $15 million), split over the Yoho!Boy, Yoho!Girl sites, WeChat and a streetwear community linked to its streetwear lifestyle app Mars, which launched last year. Figures were not released for its newer events division, including its annual flagship B2C experiential event, Yo’hood, which took place in Shanghai this month. 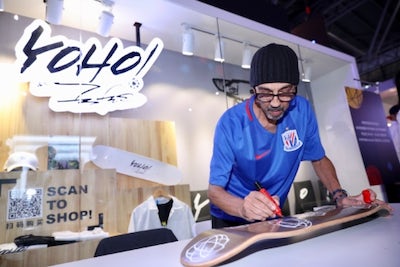 Liang has been part of a entrepreneurial class that anticipated both the timing and the complex evolution of a new Chinese consumer behaviour: “When we started the magazine, we did multi-media as well, which was ahead of game. We also moved on mobile and internet earlier than most competitors,” he explains. “Besides streetwear, we also looked to the tech world and how customers’ habits change so that we could combine the changes in customers and trends with what we are doing.”

Shanghai-based Javier Calver, managing director at the China division of global market research and consulting firm Ipsos Marketing, seems to agree with Liang’s own assessment. “What you see today is an evolution. Yoho! has been morphing, and as soon as you gather some traction you are talking about a couple of million users. However, it’s still not mainstream,” he says. “Hypebeast [for example] is younger than Yoho! and only sells online, but there are a plethora of online platforms today and you need that point of differentiation, which Yoho! seems to be doing particularly well.”

While the convergence of media and commerce is nothing new, what is clear from Yoho!’s success is that China’s digitally native youth want seamless brand experiences. With the media arm disseminating content, the retail element selling products, and the events promoting culture, Yoho! not only paints the whole picture, but consistently controls how customers perceive the brand.

“Compelling media content that consumers view as authentic can help to directly generate sales when combined with the opportunity to click and purchase immediately,” explains Liz Flora, editor of Asia Pacific research at the digital research company L2. “This can also be used to generate data on consumers’ tastes and preferences based on what they’re reading and watching.”

Tom Griffiths, strategy director at Qumin, a UK-based marketing agency focused on the Chinese market, says “Unlike many of the behemoth e-commerce companies of China, Yoho! is focused on serving one consumer: China’s trendy youth. And [Yoho!’s] media side focus on local celebrities and their styles speaks to the growing importance of local fashion trends.”

Over the past few years, Yoho! has become a gateway for the global streetwear industry to get a glimpse of what is going on in China — especially at the company’s Yo’hood event. “Streetwear insiders from all over the world can [come and] really feel how streetwear is thriving in China,” says Liang.

The next step for Yoho! is an offline store that Liang will launch in Nanjing in 2018, with a soft opening scheduled for later this month. Calvar suggests this evolution was an inevitable and logical progression. “Younger consumers want a much more ongoing relationship; it’s about long-term engagement and meaningful interaction, and this is what Yoho! is doing with multiple touch points.”

But Griffiths sees Yoho!’s move as more about strengthening its community than an online-offline solution for the nuts and bolts of inventory and delivery. “Physical spaces [can be] for events, [with] stores in high-traffic areas acting as billboards, areas for fans and followers to gather and share in their love of the brand. [They] are all incredibly useful for companies like Yoho! seeking to build communities and tribes.”

Over the years, Yoho! has managed to stay ahead of the curve in a fast-changing youth market, but as the Chinese streetwear sector becomes increasingly crowded, even trailblazers like Liang will have to stay vigilant to keep up — and he knows it.

“Yoho! can dream bigger,” he concedes, citing a new incubator he is launching called Yohope as a way to better integrate the growing ecosystem. “But what we need to do now is to prepare for whatever the shift in the youth culture will be next.”