Colin's Column | Tomes of the Times

LONDON, United Kingdom — We fashionistas always know when Christmas is close because of the avalanche of highly illustrated fashion-related books tumbling around our ears. They drop heavily, as the majority are hefty tomes setting out to be as luxurious as their subjects. Most are picture books with a brief, often shamelessly hagiographic introduction, but the worthwhile ones have sound commentary and the best are not primarily picture books at all but serious volumes with a high degree of informed text illuminated by a sound choice of illustrations — the sort of book to refer to and enjoy long after Christmas has past. 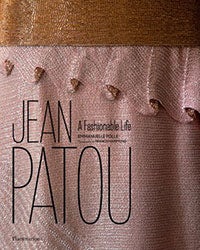 Such a book is Jean Patou, A Fashionable Life, by Emmanuelle Polle (Flammarion). It is long overdue, as the last book of any substance on this most influential couturier, by Meredith Etherington-Smith, was published in 1984. Patou's days of influence (which were enormous and long-term) were in the ‘20s and ‘30s, when the concept of modernity in women's dress was being forged in Paris, and he was the blacksmith hammering out the template of future fashion. Patou was an elegant Parisian boulevardier, always immaculately dressed and in his photographs emanating the amused self-confidence and ironic humour of the man who knows he is better than most. And in that Jean Patou was not mistaken. His eyes were raised to a distant dress horizon which he understood thoroughly, making him the only couturier in Paris able to claim to have seen fashion's first future shock of the twentieth century: the modernity of the streamlined, svelte silhouette.

We are talking of the dress revolution called sportswear, whereby good taste in fashion was to be about elimination and simplification. Based on a modern cut that gave women freedom and made them more conscious of the importance of the slim shape than ever before in history, it was a radical and permanent change of step. Even before Patou's early death in 1936 the new thinking had crossed the Atlantic (as he had himself in 1924 looked for fresh sporty models in New York to revitalise Paris shows). It was taken up enthusiastically in America, whilst Paris pulled up the drawbridge and went back to reinventing its own glorious past.

But, apart from Dior's brilliantly convincing ‘New Look,’ traditional Paris was dying - even Balenciaga embraced the idea of the loose fit and straight line first shown by Patou. From Patou came Claire McCardel, Calvin Klein, Ralph Lauren and all the Seventh Avenue copies of their work that in the forties and fifties made Fifth Avenue the epicentre of cool chic. Its sidewalks were full of immaculately dressed but perfectly free 'uptown' girls (as Frank Sinatra was to immortalise them in song) with long legs and ankles as elegant as any thoroughbred, perfect teeth and bouncy-clean hair. This was the modern woman, conceived by Patou and created in New York, the most advanced city in the world at that time

The rest might be called history were it not for the battle that jealous little woman, Coco Chanel, waged against Patou. I am quite sure that she knew who was the better designer of the two but, refusing to accept it, as she did all she could to push him off the pages of the society and fashion magazines. But, as this admirable book makes clear, the era they shared before his death was undoubtedly owned by Jean Patou, which is why this is a book to buy and keep. I hope it will redress the balance of the endless flow of books on Chanel, most of which have nothing new to say and are nothing but opportunistic re-hashes of a story done to death. 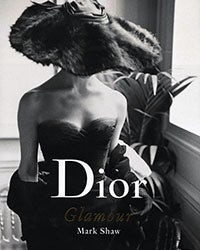 Simply titled, Dior Glamour: Mark Shaw (Rizzoli) is a very unusual and revealing book that gives the lie to my earlier statement about predominantly illustrated books. This is a picture book, but it is also an eye-opener. To begin with, who is Mark Shaw, the man whose photography is the backbone — and almost the entirety – of this book? An ex war photographer, once with Harper's Bazaar and its legendary art director Alexey Brodovitch, Shaw became a star with Life magazine as well as being a friend of the Kennedys. He was one of the top five New York photographers in the fifties as well as Life's contributing photographer in Paris, a role that enabled him to not only to become accepted by the House of Dior but even by the designer himself — no mean feat with such a deeply insecure, superstitious and suspicious man.

It is perfectly clear that Shaw was trusted to such an unusual extent that he was allowed in the atelier (the holy of holies in any fashion house) even during fittings (the most private, overwrought and secret of moments) and allowed to take photographs of the action (including Dior himself at work) as and when he wished. In fact, he had the run of the whole establishment for over ten years, which covered most of Dior's 'divine decade' from 1947 to 1957, a collaboration only ended by the couturier's early death of a heart attack. The clothes and situations Shaw captured on film are almost all about Dior himself although it is pleasing to see some of Yves Saint Laurent's work and also Marc Bohan, photographed with his first collection after Yves' brutal expulsion from the house.

This very worthwhile book is a valuable document of an age long gone but still remembered by some. They will wallow in a warm bath of nostalgia but it is important that those who are younger study the book and take in all the telling details illuminated by Shaw's lens. The buyers, the customers, the candid shots in the cabine (dressing room) and the carefully posed and composed formal pictures that finally appeared in Life magazine are mainly black and white but they lose none of their interest for that — and there are plenty of coloured ones as well. This book, large, heavy and expensive, is not likely to end up under many family Christmas trees, I would imagine, but it should certainly be in the library of every college which runs fashion or sociology courses. And let's hope that Dior Glamour will be re-issued some time as a paperback so that it can be accessible to a wider public.

Many years ago, I briefly edited a magazine and I can assure you that it is heady wine for even burgeoning megalomaniacs; in my case, excitement tinged at the edges by the ever-constant fear of failure. But the opportunities for bossing others around are legion, if you care to take them. Diana Vreeland clearly left no opportunity to do so unexploited, not necessarily because she enjoyed being bossy (although to a point she clearly did) but because she instinctively knew not just what was needed but what was right. In fact like all great editors (and, after all, there are no other plausible contenders to the title of the inventor of the modern fashion magazine apart from Helene Gordon Lazareff, founder editor of Elle), she was a tough control freak who used her power shamelessly in order to get what she wanted – for the greater good of her readers. Vreeland had a mission. It was a simple one – to make high fashion glamour part of the American woman's life, even if merely vicariously, in order to give her confidence and pride in her country and her gender. She did it brilliantly by helping her readers understand that which she felt they should understand and to trust her in her belief that that she was right. 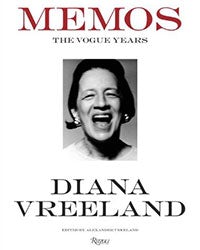 And that is why the latest addition to Vreelandiana proves why her phenomenal influence continues at a pace showing no sign of flagging – one, I might say, she would have adored. Books, a one woman show, a film and regular cameo appearances in diaries and memoirs are all keeping her extraordinary flame alive, I am happy to say. The latest example of the fuel that makes a legend an icon and eventually a goddess is Memos: The Vogue Years, edited by her grandson Alexander Vreeland (Rizzoli). It is a measure of the esteem in which she is still held over forty years since she was removed from the editorship of American Vogue that a book can be published consisting entirely of the internal staff memos that throughout her tenure at the magazine she rattled off like machine gun fire. As transitory as the day of the fashion shoots – which are the memos most frequently written — how can they be of any interest to us today, you might ask. But, in fact, they are not just interesting. Their luminous hysteria and intensity of determination read like a novel and draw us in so that we keep turning the page whilst thinking, 'why am I reading this?'

The answer is that star quality is star quality no matter how it is manifest and these memos are mesmeric. Clearly dictated, (can we imagine Vreeland sitting at a type writer?) these memos show us the woman with all her famous bedazz at full gallop. Her voice is sharp and crisp and never less than entertaining This is a book that will give true fashion folk endless pleasure — and future editors more that a few pointers in how to cajole, flatter, and even gently threaten in order to get exactly what they want. I loved it.