Charlotte Tilbury, a member of the recently launched BoF 500, talks to Robin Mellery-Pratt about her wild childhood on Ibiza, the transformative power of makeup, and her new beauty brand that’s been a lifetime in the making.

LONDON, United Kingdom — Charlotte Tilbury grew up on the Spanish island of Ibiza with no telephones and intermittent electricity. There were, however, other things for her to focus on.

“I remember, we were about 6 years old, we used to go through the back entrance of the Ku bar and be in the pool, sliding down the papier mâché dragon. You would have James Brown over here and Grace Jones over there and The Stones, or part of them, playing with another band,” recalls Tilbury.

The Ku bar’s raised platforms, curving bar tops and pool-traversing catwalk were perfectly designed for the showmanship of its hedonistic clientele, for whom less was definitely less as they paraded in fantastical confections of their own making, like living breathing Antonio Lopez illustrations. Tilbury, a wide-eyed child, “urchin-thin with a mass of straggly red hair,” was at the centre of it all, utterly transfixed by “all the amazing characters” and the creativity with which they expressed themselves.

“When you are brought up around people who are very stylish, very expressive, you don’t realise at the time, but those influences really go naturally into your library of references.”

Through perseverance, hard graft and a good deal of luck, Tilbury has capitalised on her library of references to become one of the most influential makeup artists in the fashion industry — and one of the few with a personal brand capable of supporting a product line. Indeed, this month, Tilbury launched Charlotte Tilbury Beauty, initially rolled out across her own e-commerce site, Net-a-Porter and London’s Selfridges, with plans to enter the United States in early 2014.

The brand has been a lifetime in the making — Charlotte’s lifetime,” Demetra Pinsent, chief executive of Charlotte Tilbury Beauty, tells BoF. Pinsent is alluding not only to Tilbury’s career, creating runway and campaign looks for the likes of Tom Ford, Stella McCartney, Christopher Bailey at Burberry and Dolce & Gabbana, but also to the personal philosophy Tilbury has developed through her work.

Tilbury first discovered what a makeup artist is when she was 11 years old, sat on a beach on Formentera with a group of her parents’ friends. “We were looking at a Vogue cover of Jerry Hall and they were saying, ‘Look what Mary [Greenwell] has done.’ I had never heard of a makeup artist before.”

“In those days it was really about glamazons and celebrating women. It was all about curves, boobs, legs, hair and makeup and just beauty. Not this kind of weird, androgynous look which is more de rigueur today. In a way, me developing this brand is looking at Mary and thinking ‘Oh my god she is like a magician, she can make you look beauuutiful.’” 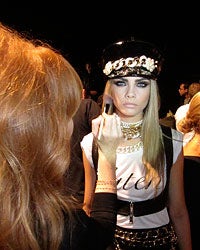 “I remember being backstage at a runway show for the first time, when I was assisting Mary and every single supermodel was in a room: Claudia, Christy, Naomi, Cindy, Stephanie, Linda and Helena. In a way, it was intimidating, but it was also just sort of breath-taking. I was looking at them as if they were from another planet. Then you realise through what we [makeup artists] do, you can achieve a little bit of that — and that is going into my brand. That’s what I love so much about it. Makeup really is a woman’s secret weapon. It can totally change your life; it can empower you.”

She is genuinely scandalised when she asks, “Do you know that 50 percent of women don’t engage with makeup in this country? It kills me. It’s crazy. They have this weapon in their arsenal and they don’t use it.”

The supposed frivolity and superficiality of beauty often belies the irrefutable role it plays in human interaction, a role Tilbury is eminently practical about. “The fact is, it’s human nature, [people] judge you by the way you look, it’s just a known fact. There are Procter & Gamble studies, Harvard University — before and after, the same women, with and without make up: ‘I trust her, I don’t trust her.’ And it’s the same woman! ‘I fancy her, I don’t fancy her.’ Why would you not put your best foot forward in life?”

Tilbury’s belief that beauty is an empowering tool is at the crux of her personal brand and product line. However, it’s the experience she’s gained through her twenty-year makeup career that lends them the necessary credibility.

Tilbury may have had a helping hand in landing her first assistant job, but her career has been hard fought for. “I used to think, ‘Is this ever going to happen?’ I started in a recession, so everyone wanted to [hold onto] their work, everyone was dropping budgets, no one wanted to open doors.” Tilbury would flick through her Rolodex, cold calling editors, agencies and photographers, begging to test shoot. “It was tough, slow and very laborious. I used to have a card that an editor friend of my parents had written to me, saying ‘Knock ‘em dead Charlotte, I know you will be a star.’ I read it all the time when I was disheartened.”

Tilbury’s perseverance would eventually pay off when, at 23, she was taken on by a photographic agency. “Like anything in life, it’s sheer determination. I really believe in the power of creative visualisation and achieving whatever you want to achieve in life. I am tireless. I will put 200 percent in — and then get 400 percent back.”

It can be exhausting but tremendously exciting. “February is fashion week — New York, London, Milan, Paris — going into the beginning of March,” she begins, describing her annual cycle of activity. “March, April, May, beginning of June is the campaign season. June is couture and menswear. July is more editorials, then perfume campaigns. Then September is fashion week again. October, November is campaign season, until December, where again you are doing bits of editorial and a few cosmetics campaigns and then it starts all over again in January with menswear.” 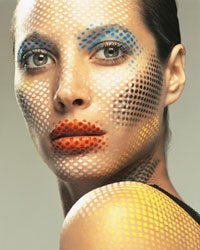 Tilbury’s critical eye, inherited from her painter father, is the foundation of her work. “I study the face a bit like a surgeon; say one cheekbone is a little bit weaker than the other, let’s match that up. Let’s hollow those cheekbones, make that jaw, contrast these colours, widen her eyes and lift that. I literally sort of decode it and study it and, then, like a computer see where you can enhance. But I always retain the beauty.

I have taken Lichtenstein for example and covered different parts of Christy Turlington’s face in dots, but she was still beautiful. I can’t just lose the beauty for the sake of art.”

Retaining beauty has led to consultancies at Chanel, Helena Rubinstein, MAC, John Frieda and Giorgio Armani, designing lines right down to their components. And after 15 years of experience with cosmetics laboratories, Tilbury has cherry picked the best formulas for her own line. Instead of BB (“beauty balm”) or CC (“complexion corrector”), Tilbury’s products are dubbed TT for “treat and transform.”

“Everything is a hybrid, the lipstick has a natural antioxidant in it. Even the eyeliner is collagen-producing. I got lucky. They had these amazing revolutionary formulas that I really wanted.”

Tilbury has designed five natural and five nocturnal looks, with names like The Golden Goddess and The Ingénue, to enable women to “recreate the iconic looks we count on like trusted little black dresses,” says Pinsent. Tilbury, as is her nature, focuses on the human element. “People can feel scared, silly and clownish and generally look worse than they did to begin with. They don’t know what to choose or what to use. That’s what this brand does.”

She can do it all, but in an effort to ensure her customers can too, each product has been intuitively designed, with instructions. “Even if it is an eye shadow, you will open it up and the palette will say ‘Prime, enhance, smoke and pop,’ so you’ll never be at a loss as to what to do.”

Digital content and distribution will be core to the proposition from launch. “The digital revolution is really key and important, when I talk about holding someone’s hand and making them feel safe, because they are being told by an expert that has a credible career that these are the colours that suit you, because you have blue eyes or brown eyes — it is almost like having a consultation with me,” says Tilbury, who, everyday, sees the transformative power of makeup and its effect on those in her chair.

She believes in it. And when Tilbury says, “I don’t just want to sell my product, I want to touch women and change their lives through makeup,” you believe her. And you can’t but hope that she will.