The preferred lensman for the new Gucci talks collaborating with Alessandro Michele and why he decided to open a hotel in Venice Beach.

The preferred lensman for the new Gucci talks collaborating with Alessandro Michele and why he decided to open a hotel in Venice Beach.

NEW YORK, United States — Glen Luchford is sitting in the boardroom of creative agency Art Partner’s downtown Brooklyn offices, slightly hunched over a computer and clicking through images from a yet-to-be published book. The series, which spans two decades, is made up of test shots of his former assistant, Jack Webb, standing in for a model while the lighting is fine-tuned. “Jack has a very sloping forehead, so if you can make [him] look really good then the light interprets well on [other] tiny models,” Luchford says. “He’s like my canvas.”

While Webb may not be a typical subject for a fashion photographer, Luchford has managed to imbue the series of pictures with the same cinematic quality that he has brought to major campaigns for the likes of Prada, Rag & Bone and, most recently, Gucci, where the veteran photographer has been working closely with creative director Alessandro Michele to craft the house’s new image.

I’m still waiting for the day my agent tells me a bunch of kids came and took over and that I’m in retirement.

Indeed, after 30 years in the business, Luchford’s work is more relevant than ever. “With Alessandro, he really unshackles you and encourages you to go further which is very exciting and unique for a large corporation,” he says. “The first time I shot with him, we did a very edgy picture. Normally, the client goes, ‘That’s great you can put it in your book.’ Whereas he was like, ‘Great, keep going.’”

Born in 1968 in Brighton, Luchford left school at 15 to work at a hair salon in Covent Garden run by Vidal Sassoon’s disciples. “If you weren’t an academic and wanted to do something that wasn’t kind of boring, you did hairdressing,” he says. “It was kind of exciting because the fashion scene in London was really emerging in the mid-80s, so if you were hairdressing, you were in the middle of that.”

Luchford managed to get work with the legendary stylist Ray Petri under the umbrella of his creative firm Buffalo. “He was probably the most significant person I worked with in that period,” Luchford says. “When you look back, he was doing things that no one had ever done before, and all anyone wanted to do was be near him and work around him.” During their last meeting, over coffee at Bar Italia in London’s Soho, Luchford showed Petri one of his early experiments in photography. “He was surprisingly encouraging,” he says. “So I figured there might be something there.”

Re-focused on photography, Luchford landed a series of assisting gigs, but kept getting fired. At one point, he went back to Brighton and took a job in an air-freshener factory. “It was so awful, I only lasted a week, but it inspired me for the rest of my life,” he says. “I saw these people that were going to work there for the rest of their lives and thought, ‘OK, I have to do something.’”

In Brighton, Luchford began documenting skateboarders. “The kids that controlled the ramps were these really amazing skaters from London and they sort of owned it. I couldn’t get on top of the ramp [as a skater] — it was a member’s only type of thing,” he recalls. "The only [other] guys that could were the photographers. So I started taking pictures of skateboarders. And then a fashion student in Brighton asked me to take pictures of her clothes.” She took the photos to Blitz, a 1980s style and culture magazine with a contributors list that included Susannah Frankel and Nick Knight.

Luchford began shooting for British style bible The Face, around 1987, at the young age of 19. He didn’t have a telephone at the time, so he gave the editors the number of a club he used to frequent in Brighton to call when there was a shoot. “If you shot eight pages, you got a-thousand-bucks for a day’s work,” he says. “Which seemed like a fortune.” Then came album covers for seminal early-90s musicians The Stone Roses and Björk. “The music industry was a great source of income. There was a lot of money in it.”

Later, the stylist Judy Blame, part of Petri’s Buffalo collective, tapped Luchford to shoot fashion. “When I look back at the technique, it’s really kind of poor. I think it took me a long time to really be able to articulate properly in the fashion photograph.”

In 1994, Luchford photographed Kate Moss on the streets of New York for the American edition of Harper’s Bazaar, then under the watch of Liz Tilberis. “It got me fired from the magazine,” he says. “I didn’t understand the difference between The Face and Harper’s Bazaar. It just wasn’t appropriate. But some of those pictures I do look back at fondly because of the energy. Those are the pictures people want to put in museums.”

Indeed, Luchford's work has been exhibited at London’s Victoria & Albert Museum and New York's MoMA PS1. But back in the mid-90s, Luchford’s career was still very much in limbo. “I didn’t have anywhere to live and was couch hopping, frustrated that my friends were shooting tons and that I was left behind,” he remembers. Then came a big break. After an American magazine canned one of his shoots for being a “little edgy,” his agent sent it to Italian Vogue, where it was shown to Miuccia Prada and Luchford was asked to sign a two-year exclusive contract with the brand. “I had 90 percent of the year off, so there was no excuse not to have an idea,” he says “But that was probably the last time that would ever happen. I would never do that again. I don’t know any photographer that would.”

For Spring 1997, he shot Amber Valletta reclining in a boat on a misty lake in a seamed Prada slip dress. “They were very dark images. They were interesting images but not interesting fashion,” he says. “What you need to achieve in a magazine is to stop someone, to [make them] look at a picture and, in that sense, they were successful.”

He isn’t trying to tell a story, however, says Luchford. “It’s not something that I seek. Generally speaking, you find a great location, you look at the fashion to check that they can be put together and try to choose the right model,” he explains. “Then, you all arrive at this place and wing it, basically. There’s no failure. I went to work with pneumonia one day. When you have 20 people flying in, you have to show up. And not only show up, but you have to deliver.”

Luchford has certainly delivered, producing advertising work for brands like Tod’s, Levi's and Calvin Klein, as well as editorial shoots for Vogue Paris, British Vogue and AnOther Magazine. In 2015 alone, he shot roughly 14 advertising campaigns for nine brands. But he has never valued volume. “A lot of the photographers, my contemporaries, shoot a much larger volume of pictures that I do. They shoot every day. I have always not done that,” he says. “I try to create space and find things to do outside of the industry. Otherwise I find that I take really bad pictures. “

“What’s happening now is fashion has entered its industrial period and shooting a photograph is no longer relevant. It’s eight fashion photographs and a film and social media and some portraits and an interview. So you’re not really a photographer and that word isn’t even relevant. I don’t know what we are anymore.”

But Luchford is far from a luddite. In 2000, he was one of the first amongst his peers to embrace digital cameras. “I did it out of necessity because I was doing a shoot for Prada, which was never published, of girls dancing. I needed to see the clothes in movement, so I started to investigate digital photography, which was not widely available at the time,” he explains.

He has also become an active user of Instagram. “I think I was instantly addicted to it because it’s so positive and there’s no dislike button,” he says. “Now, I am starting to get annoyed by the veneer. You look at people’s lives on Instagram and it’s such a peculiar representation.”

Last year, Luchford launched a second career as a hotelier, opening The Rose Hotel in Venice Beach, California, with his business partner and friend Doug Bruce. While Luchford has lived in New York since the early 2000s, he spends significant time in LA and first visited Venice back in 1993 to photograph Dennis Hopper for The Face. The motel-like lodge sits on the still eclectic, if gentrifying, Rose Avenue. “It was basically a crack house when we bought it — really rundown,” he says.

To Luchford’s surprise, the Rose was an instant hit. “It’s like the party started and I didn’t have the music on yet,” he says. When visiting LA, fashion creatives from New York and Europe were increasingly eager to stay in Venice, especially the kind who appreciate the hotel's spare, straightforward decor. In February 2016, the hotel will shut for five months of major renovation. “It’s not going to change in style that much,” he promises. “Magazines don’t come and visit — they just write about the place without seeing it and overselling it as if it’s this really swanky hotel, because they haven’t done their homework. It’s a cool beach motel, but it’s a beach motel.”

So, what does Luchford plan to take on next? “I am surprised that people still want me to take pictures; I can’t believe I haven’t been put out into the street,” he says. “I thought if I got five years it would be a miracle and then it was 10 years and then it was 15. I’m still waiting for the day my agent tells me a bunch of kids came and took over and that I’m in retirement.” 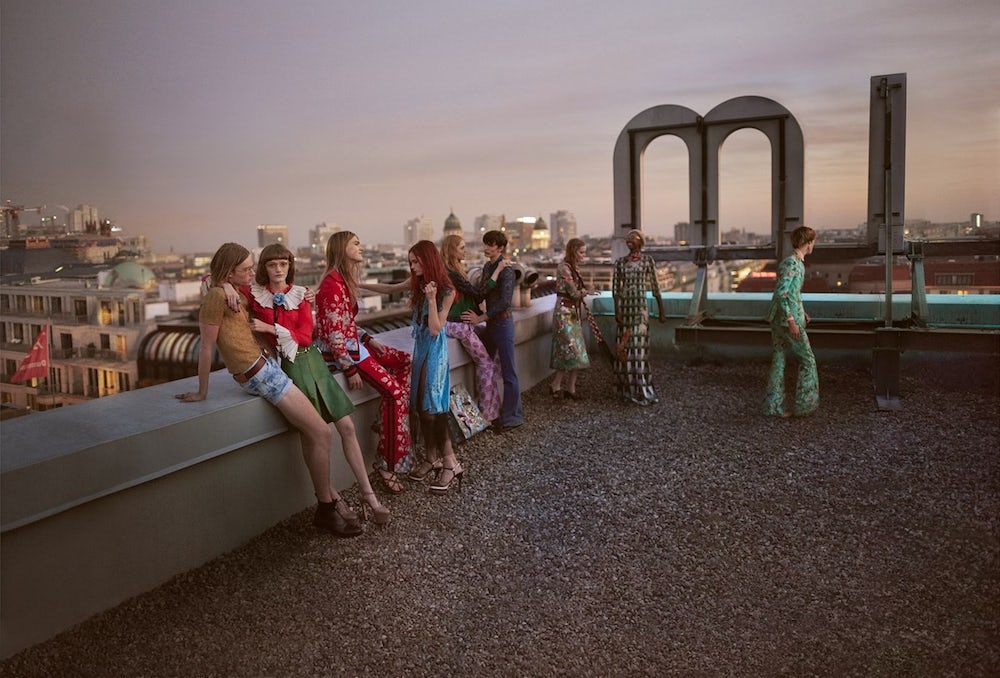