BoF sits down with Justin O’Shea, buying director of MyTheresa.com, to understand how his hands-on attitude helped to turn a Munich-based store into a successful global luxury retailer that generates $130 million in annual revenue. The Creative Class is supported by CLIO Image, an awards show honouring creative excellence in fashion, beauty and retail.

BoF sits down with Justin O’Shea, buying director of MyTheresa.com, to understand how his hands-on attitude helped to turn a Munich-based store into a successful global luxury retailer that generates $130 million in annual revenue. The Creative Class is supported by CLIO Image, an awards show honouring creative excellence in fashion, beauty and retail.

MUNICH, Germany — The corners have not been rubbed off Justin O’Shea, the tattooed and bearded buying director of Munich-based online luxury retailer MyTheresa.com, which was acquired by Neiman Marcus in September. Though his time is now spent in almost permanent transit between five-star hotels for buying appointments across the globe, in a uniform of bespoke suiting by New York tailor Doyle Mueser, O’Shea’s early years in a remote aboriginal village in Australia, working in mines with his dad and unpacking boxes at a supermarket, are visible in his hands-on approach and wide-eyed enthusiasm for his job (as well as his liberal use of expletives).

If it’s not part of the lifestyle matrix of what people are wearing and sharing on Instagram, then it doesn’t matter.

Entering the brightly lit MyTheresa.com warehouse in a quiet business district on the outskirts of Munich, O’Shea is greeted like a workmate by the team taking deliveries. “Early on, I used to go to the warehouse all the time and unpack boxes with the guys,” he recounted. “They now love and hate brands, and they’ll be like 'What the hell d’you buy that for? Have you lost your mind?' or, 'I love that Balenciaga.'” Walking around the warehouse — which has the capacity to expand threefold to keep up with MyTheresa’s current pace of growth (50 percent year-on-year) and currently holds over 170 brands — O’Shea has a forensic knowledge of every stage a product passes through, from order to fulfilment. “I love every process,” he said. “There’s the first thrill when you see a piece in an appointment and then months later when you see it unpacked it helps to remind you that your decision was right or how beautiful it is when you see it. From where I grew up, I would have thought that my job would have been unpacking boxes — and I would have been happy with that.”

O’Shea was a latecomer to fashion and spent his mid-twenties travelling and working at streetwear and denim retailers in Australia and Amsterdam. He later moved to London where he scored his first big coup: while working for a showroom he succeeded in getting denim brand April 77 into Dover Street Market. Later, when a call came from someone he’d met while traveling, O’Shea became a buyer for Al Ostoura, a powerful luxury retailer in Kuwait with 40 stores. He joined MyTheresa.com in 2009, with absolutely no experience in online retail. “I had come from that Kuwaiti experience where I was very store-focused and thinking, ‘Don't even look outside the box because it's not going to work,’” he said.

At the time, MyTheresa.com was a smallish concern owned by Munich locals Susanne and Christophe Botschen, who founded their multibrand brick-and-mortar store Theresa in 1989, before launching the website in 2006. Since O'Shea joined, the team has grown from 20 employees to over 200 and, this year, MyTheresa.com's turnover is set to exceed $125 million. The company raised additional investment from Acton Capital in 2010 and, this September, was acquired by Neiman Marcus Group for an undisclosed sum. 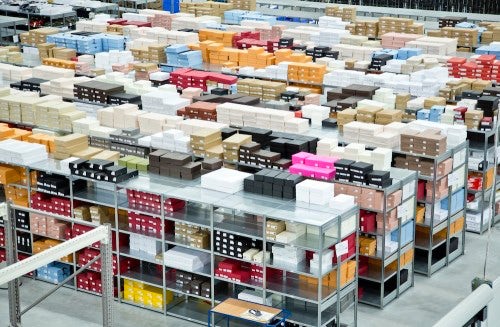 Inside the MyTheresa.com warehouse | Source: Courtesy

The growth of MyTheresa has meant O’Shea’s role has shifted from “buying and a bit of everything, working on the shoots and doing some PR” to overseeing a team of five assistant buyers, supported by a PR team led by Anthony Kendal, formerly of Acne, as well as a host of stylists and merchandisers. “At the beginning, I was the only person they had ever employed to have an opinion on the fashion side and, obviously, they were wary — as they should have been with a skinhead Aussie boy in black jeans. I was a little out of left field for them,” he said. However, O’Shea soon proved himself to his new employers. “I remember in the first buying season, Spring/Summer 2010, Marni had these really cool socks with every look on the runway and I said, ‘We gotta get the socks’, but the Botschens were like, ‘What is this? People don't want $120 socks!’ I insisted and we sold them all on the first day. If there was one defining moment in earning their trust, it was choosing those bloody socks from Marni!”

Despite magic moments like these, O’Shea is wary of being placed in the role of fashion fortune-teller. “People kept trying to tell me, ‘It's all about your vision.’ But you know what, I don't think it is. Fashion is so much bigger than that and who am I to limit their options just because I have taken against something?” he said. “Of course, I have bought pieces for a reason, but I don't try and put myself in the position that it all comes down to my vision. It's more important to offer the best pieces from the brands and let people make the choice for themselves. I think that coming from working in stores. You get that humbleness that you need to make people happy.”

So, if he won’t accept the idea of gold-plated personal taste, what makes O’Shea a good buyer? The answer seems to be doing due diligence on every aspect of the market: going deep into the sales metrics on a daily and seasonal basis, thinking in terms of product categories as much as brands, keeping a close watch on events attended by international taste-leaders, like the Frieze Art Fair, and cultivating good relationships with brands.

“Buying is a much more analytical experience than before. But it’s not analytically guiding your taste, it's guiding you to quantify in the right way, both in terms of the consumer and the product categories. We have a global customer and if you say you’re the world’s finest edit of luxury fashion, you can’t be there unless you are servicing them down to the final detail of sizing,” he said.

According to O’Shea, category — not brand — reigns true when analysing performance. “One of the most important things is devotion to detail with categories. Everyone thinks a brand is performing in a certain way — but the brand doesn’t perform like that, the category performs great or a category sucks or a category is mediocre. You need to go the next step to see where the growth is coming from, how it is performing and how you treat the brand the other side of the season,” O’Shea explained. “That’s something I look at very closely. To the exterior it could look like this brand is doing really well, because the brand is at 60 percent sell-through in the middle of the season. But it could just be that brand 'X' has one great shoe and we’ve sold all of them, but the rest of it sucks."

To describe how his observations of the international art and music elite influence his buying decisions, O’Shea introduces the term ‘lifestyle matrix.’ Events such as Frieze, he says, offer a snapshot of worldwide lifestyle trends. “Fashion is influenced so much by art and music at the moment that you need to look past just the pieces to figure out what the lifestyle will be and then you buy for the lifestyle,” he said. “If it’s not part of the lifestyle matrix of what people are wearing and sharing on Instagram, then it doesn’t matter.”

O'Shea takes a rather romantic and serious view of what it means to work with a brand for the first time. “Taking on a new brand for me is like getting married," he said, emphasizing the need to build long-term partnerships with brands, rather than just promote new names. “I want the brand I buy to be as successful as we are, because I want to be able to go into an appointment and say, ‘Great — I’m giving you double the budget you got last time.’”

He is wary of taking on new brands before they have settled into a stable aesthetic, because of the tendency of young brands to chop and change direction. “I am always cautious to establish that we’re going in the same direction so we can build the budget and grow bigger, because I don’t just want businesses that stagnate; I don’t want just want to buy 'x' thousand each season and for it to stay like that; I want it to be dynamic,” he said. Constantly assessing how to move forwards is the core of how O’Shea ensures that his buying relationships remain both relevant to consumer tastes and, crucially, dependable for MyTheresa.

O’Shea’s modest roots have played an important role in shaping the way that his buying strategy has developed, not only in his attitude that no task is "beneath" him, but also in the absence of preconceived ideas about how to do his job, due to his early lack of experience. This, coupled to the small size of the business when he joined MyTheresa.com, have undoubtedly helped to shaped his present success. “I could find my way in and if I made mistakes they were small. It gave me the opportunity to give MyTheresa a different view from before as we expanded,” he said. “My limited experience as a fashion buyer helped because I wasn't tied into thinking, 'This is how I've been doing it all my life.'”

“Being in touch with the end consumer is a great thing," he advises those who aim to follow in his footsteps. "It doesn’t have to be a fashion store — it could be an O2 store, an ice cream shop — but any time you are in touch with customers and feel their angriness or happiness it makes you remember the importance of your job.” O’Shea also believes in learning on the job over formal education. “I don’t think going to college or to school is important, you don’t need to have a background knowledge about everything to be good at an industry that is based on taste,” he said.

“I flew from country to country trying to find out what I wanted to do, working in stores and showrooms just so I could prove to people that I really wanted to be in this industry. You just need to work hard and people will reward you.”

LVMH vs Tiffany: Deal or No Deal?