Known for zipping her clients Emma Stone, Claire Danes and Zoe Saldana into bold and atypical red carpet looks, the Los Angeles-based stylist shares her thoughts on the state of celebrity dressing.

Known for zipping her clients Emma Stone, Claire Danes and Zoe Saldana into bold and atypical red carpet looks, the Los Angeles-based stylist shares her thoughts on the state of celebrity dressing.

LOS ANGELES, United States — It’s nearly a year since actress Emma Stone showed up to the Golden Globes in January, wearing a custom Lanvin one piece. Yet, the look — a strapless sequinned bustier attached to a pair of black tuxedo trousers, all tied up at the back with a bow and train — might still constitute the most memorable red carpet moment of 2015. “It’s funny that it did have so much stride,” says Stone’s stylist of seven years, Petra Flannery. “When she tried it on, there was definitely a spark in her. It works because she’s a risk taker. It had all the elements.”

Just a fortnight later at the Screen Actors Guild Awards, Stone garnered red carpet accolades again: this time for a tuxedo-inspired Christian Dior Couture gown. Stone’s sartorial wins, along with fellow actress Zoe Saldana’s appearance in curve-hugging Atelier Versace at the Academy Awards in February, earned Flannery the top spot on the Hollywood Reporter’s list of 2015’s Most Powerful Stylists. “They all take the time to do the fashion thing,” Flannery says over a mid-morning latte at the Polo Lounge in the garden of the Beverly Hills Hotel. “It makes it really fun.” 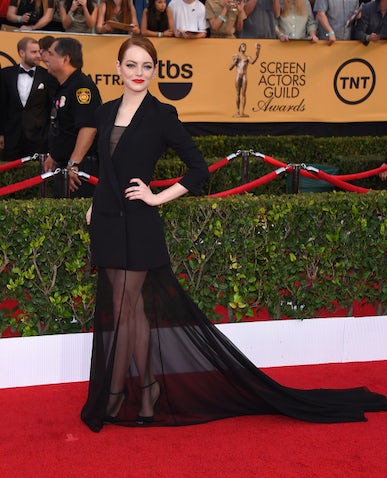 While Flannery may be having fun, her operation is serious business. In the past decade, the Los Angeles-based stylist has earned a reputation for dressing her stars in playful choices with a fashion edge, from Saldana’s ombré Givenchy at the 2010 Academy Awards to Claire Danes’ sequin-striped Prada at September 2015’s Emmy Awards. Her current client list is made up of in-demand A-listers who juggle frequent filming with promotional appearances and awards season. Along with Stone, Saldana, and Danes, Flannery works with Mila Kunis, Carey Mulligan, Andrew Garfield and Amy Adams, as well as country singer Faith Hill and her husband, Tim McGraw. Her team of four — which inflates with part-time staffers during awards season — includes her older sister. “She’s my secret sauce,” Flannery says.

Flannery’s manner is straightforward, professional and open; qualities that have kept the stars loyal (she has been working with some of them for more than a decade). Her playful side comes out in her love of clothes. Today, she is casually clad in a white embellished Erdem sweatshirt, a high-low piece that is indicative of the not-so-austere styles she steers her clients toward.

“I’m such a fan of fashion,” Flannery explains. “I really respect the creative process.” And fashion — from Alber Elbaz to Riccardo Tisci — respects her. That’s because Flannery represents a new generation of celebrity stylists, as essential to a brand’s success as the image-makers on the campaign set and backstage at its runway shows. “In the past 10 years, it has changed so much,” she says. “The process used to be that it went on the runway, then straight to sales, then it would be available for editorials. Now, red carpet is in the middle of all of that. Yet one helps the other. If [a piece] on the red carpet gets great recognition, then sales can boost.”

If her client is about to embark on an international press tour, which can require a dozen outfit changes, sometimes she will call in more than 100 pieces. “I think brands are really open to dressing celebrities because the general public has gotten excited about what people wear,” she says. “It used to be that only so many pictures ran of something. Now, because of social media, the possibilities are endless.” The proliferation of events, dinners and launches — and in turn photo opportunities — has also opened up the field for designers and brands without the funds to do something in the vein of Jennifer Lawrence and Dior’s partnership. “There are so many great designers. Look at what Joseph Altuzarra is doing,” she says. “Or Prabal [Gurung] -- Zoe was [one of] the first to wear him. We’ve always wanted to support young designers. You’re always going to have the big houses, and they’re amazing too. For me, I have so many things to work on, I pull from it all."

Flannery isn’t hungry for the spotlight, yet she understands the importance of self-promotion. “When I started in the business, it wasn’t like this. There were not things that celebrated stylists, or even revealed them,” she says. “I got into it because I love fashion and it was kind of behind the scenes. Now, it’s so exposed.”

Indeed, there were no celebrity stylists to emulate in the 1970s and ‘80s when Flannery was coming of age in Mill Valley, north of San Francisco. Her mother, however, was a fashion connoisseur who ran the Pucci department at San Francisco’s Saks Fifth Avenue on Maiden Lane in the late 1960s. “She wore Courrèges, all those things,” Flannery recalls. “She was into all of those designers.” Later, in Mill Valley, her mother ran Miki, an influential local boutique that sold Dries Van Noten and Calvin Klein Collection. “It was ahead of its time,” she says. “It influenced my sister and me.”

Flannery moved away at 18 to attend the University of Southern California (USC). She majored in political science, but also enrolled in drawing, painting, art history and film classes. In 1995, after completing her degree, she joined Elite Models to be an agent. “It was a great entrée into the fashion business because I learned who all the players were. I remember meeting Heidi Klum when she was 17. All of those models and photographers — Linda Evangelista, Mario Sorrenti, Peter Lindberg, Matthew Rolston — are still relevant today.”

Five years into her career at Elite, Flannery itched to do something more creative. A friend from the agency had become a shoot producer, and he helped her land on-set jobs for brands and titles such as Blackglama, Harry Winston and Harper’s Bazaar, where she worked with Yasuko Austin. Her first styling gig was playing second assistant to Leslie Lessin on a Guess campaign shoot in Las Vegas. “Those are the things that are major learning experiences,” she says. Soon after, she began working with Andrea Lieberman, who was best known at the time for styling and designing looks for Gwen Stefani and Jennifer Lopez. (Lieberman now runs and designs the successful contemporary label A.L.C.) 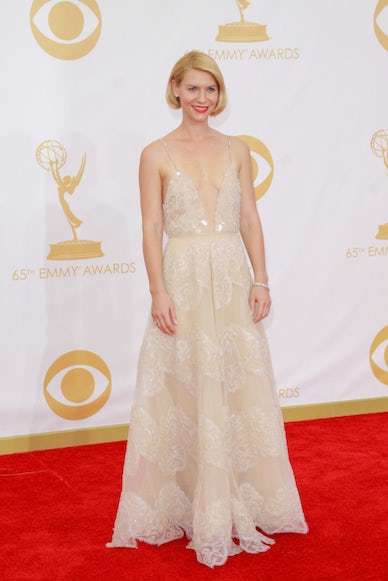 Flannery worked for Lieberman for more than three years. “You really need to have that time assisting. There are certain things you can’t learn as a stylist just from someone telling you it’s going to happen,” she says. “You have to be in the situation, sweat it out, and be this problem solver. I learned so much from her.” In particular, the importance of hard work: “If you do something that’s really true to yourself, [which] you believe in, the success will come,” Flannery says. “But you also have to know that it’s a business.”

By 2006, Flannery was ready to go it alone. “Because I had worked for years before and had a career before, it was easier for me to feel like it was time to go off on my own,” she says.” Besides Faith Hill — whom she worked with under Lieberman — Saldana was her first major client. (Flannery was there to guide her through the Avatar and Star Trek press tours.) Then came Stone, who was only 19 when they started working together. “There is a certain way about them, a certain confidence, but also a humbleness,” she says of those now-superstars. “You find clients along the way and you really click.”

It’s clear that Flannery’s staying power is something to be admired within an industry where celebrity-stylist breakups have made gossip-rag headlines. More than anything, she is careful to not to overextend herself. She attends fashion week when she is able — most recently, the Couture shows in July 2015 — and is careful not to take on too many new clients. “I’m not just going to style anyone,” she says. “I get inspired by the person. I have to feel like there’s a connection there.”