LONDON, United Kingdom — “I love London!” beams photographer and director Ellen von Unwerth in her soft Frankfurt lilt, while holding court at Michael Hoppen’s Gallery in Chelsea, where she has come to unveil her latest show, Do Not Disturb. The gallery is buzzing with a crowd of fashion’s inimitable characters and misfits who are spilling out onto the street, while inside, Unwerth electrifies the room in a lightening bolt-print Miu Miu jumpsuit and her distinctive flash of wavy silver hair, turning to embrace old friends and new ones alike as they clamber to congratulate her, and all the while snapping well-wishers on her digital point-and-shoot.

“It's one of my favourite cities at the moment, especially for the art, there is so much going on here,” continues Unwerth, who has worked for a slew of top fashion publications including Vogue, Vanity Fair, Interview, The Face, Arena, and i-D, and published dozens of books of personal work from exhibitions around the world. “Normally it takes years for me to do a show, to finish the work and curate pieces from my archive, but this I did in two months!”

It would be easy to think that life for Unwerth has been one long party. Her provocative photographs often depict seductive young women in various states of undress and playful scenarios. Then there’s the host of famous friends, many of whom flew into London especially to celebrate her opening with a private dinner. But her career in fashion began accidently on her first day of university in Munich.

“As I was walking towards the door to register, a model scout approached me and that was about as far as my university life went!" she recalls. "People used to come up to me in nightclubs and say I should try it, but I thought I should really study; I was about to start economics and in the end I never made it through one day! I started modeling in Munich but I got a call from John Casablancas from Elite in Paris and that was it, I packed my bags. I modeled all over the world for about 10 years while living in Paris, and then one day, when I was about to leave for another shoot in Kenya, my boyfriend gave me a camera.”

Unwerth recalls the simplicity of the gift. “It had three buttons; a little plus, a little minus, and the shoot button. When we arrived in Kenya, I started snapping the landscape and streets, a kind of reportage. I showed the pictures to my friend who was the publisher at the time of Jill magazine in Paris. They were shocked, because models are not expected to be capable of such things, but they printed six pages! So, I just kept taking more pictures.” 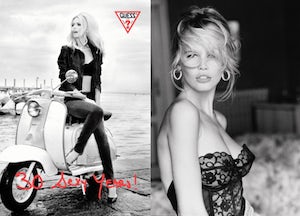 Luckily, Unwerth had an abundance of perfect subjects at hand; she would often photograph her model friends, styling them herself. And within two months, she was shooting fashion designer Katherine Hamnett’s advertising campaign. Unwerth’s reputation grew fast and, in 1989, she landed a campaign for Guess starring Claudia Schiffer, a gig that gave her career a major boost, helped to launch Schiffer and came to epitomise the brand’s sexy marketing approach. The two were reunited earlier this year to shoot the Guess 30th anniversary campaign.

“I don’t necessarily think of my work as erotic,” explains Unwerth. “People say that, but I just like to shoot girls having fun, girls who want to be beautiful and sexy. Sometimes if I’m shooting for myself, I can push it a bit more, have a bit more lingerie and naughtiness, but for a fashion shoot I will focus more on the clothes. Essentially though, it's still the same girl I’m shooting. I consider myself a feminist; I was always a strong woman, always standing up for womens' rights. I like women who look like they have their life under control. But people do over do it and become so serious, it doesn’t mean you can’t still have fun,” she says, with an audible wink in her voice.

So how does she tackle working to a client brief, whilst keeping hold of her distinctive handwriting? “With commercial shoots, you have more to consider; it’s less about telling a story and more about the clothes, or the brand. But clients do book me for my ‘reportage-y’, spontaneous style — it’s the way I shoot and they want an essence of that, so I can still have fun. With editorial, you are a little bit more free, and with my own work, yes, it’s more provocative. But,” she points out, “life is getting more restrictive in general; you can’t do this, you can’t do that, now we can’t shoot with cigarettes in the picture. Over time everything is changing.”

It goes without saying that with the rise of digital media, photography itself has changed dramatically over the last decade. Unwerth made the change from film to digital three years ago. “To be honest, I like to not put any emphasis on whether a picture is digital or not, I’m more concerned with the image itself and making something beautiful that touches you. I certainly don’t go overboard with the retouching; you can over retouch and make it look really slick, almost plastic somehow. I’m much more into how the pictures look originally, I still like grain.”

Unwerth is nothing if not dynamic. “I’m thinking of ideas every day, talking to magazines, meeting stylists, organizing new shoots, packing my bag, unpacking my bag. I live on the plane these days, traveling between Paris and New York.” Unwerth is often in transit and this sense of movement and kinetic energy extends to her photographs. “When I was modeling I was often told off for moving, they wanted me to be more static, but I love spontaneity, you have to have fun and play around. It shows personality that I love to see. I think it’s a lot more difficult for girls now. When we were modeling, it was much more like a real job, you would work almost every day nine to five and have a much longer career. Now, these girls do a few shows and they never really have time to learn how to move. I encourage my subjects to move and I click two or three times and I have the shot.”

So what advice does the now 58-year-old Unwerth have for budding young imagemakers? “I’m inspired by lots of things; by watching people, by music, art, the news, magazines, they all give me ideas for stories. But you have to find out what is beautiful to you on your own,” she advises. “It could be a painting, a photograph, a song,” she adds. “Also for photographers, it’s really important to find the right stylist. There is no such thing as the best stylist, as it’s a matter of who is right for that particular shoot.”

Getting it right? Unwerth might just come top of her class.