Early exposure to Apple computers, a homemade fanzine and an album cover shot by Nick Knight all contributed to fashion art director Remi Paringaux’s decision to found his own digital media agency based in London.

LONDON, United Kingdom — “I was very much a classic art director for ten years or so. I was completely a print person,” recalled Remi Paringaux, the fresh-faced, 29-year-old art director and founder of Meri Media, a fashion-focused digital media agency, based in the Barbican area of London, that has developed and deployed web campaigns, mobile apps and other digital content for luxury fashion brands like Gucci.

Launched in late 2010, Meri Media’s first project was a fashion magazine for the iPad, called Post, an experiment that “dematerialised magazine content for a post-matter era” and featured a cover created by Sølve Sundsbø. “It was always going to be super experimental. I didn’t want it to be commercial,” said Paringaux. “I just wanted to make the point that there is a way to translate that savoir-faire, that magazine experience, to a digital platform.” Although the title has since been deprioritised, it was the foundation of Meri Media’s early portfolio and help win the new agency its first heavy-hitting fashion clients, including Stella McCartney.

Paringaux grew up in Paris, born to a Japanese mother who worked at the United Nations and a French father who was a journalist at Le Monde. His father regaled him with tales from abroad and the family spent holidays traveling to the World Heritage sites to which his mother tended. Every Christmas and summer, Paringaux would visit family in places as far-flung as Tokyo and San Francisco, absorbing the clean, pared back design philosophy of Japan and a vaguely American-inflected accent.

The family was also an early adopter of Apple computers. “I had a Mac at home basically from when I was born. I grew up messing with that and I just loved being on computers so much that, unconsciously, I thought, ‘Hey what’s the job that’s going to get me to be on the computer a lot?’ Little did I know now that every job would need you to be on the computer!” Such was his fascination with computers that he stayed up on school nights teaching himself Adobe Illustrator and Photoshop, paying for his devotion with classroom naps the next day.

The singular power of images first struck him while the young Paringaux was interning at Virgin Records Paris, after finishing high school. One day he came across an image Nick Knight had shot for the recording artist Massive Attack. “It absolutely blew my mind, completely baffled me. My new goal in life was to work with this guy and to work in this kind of image-making industry,” said Paringaux.

Armed with a goal to work in fashion and a place to study graphic design at the London College of Communications, Paringaux decamped to Britain. Serendipitously, he was housed in the same residence halls as budding fashion photographer Matt Irwin, who was then studying at the London College of Fashion. The two hit it off straightaway and before long had produced their first collaboration: a fanzine. “We just printed 6,000 copies and it was mainly distributed at the different colleges,” said Paringaux. “But I guess we were doing something right because it was really quite well-received.”

So well-received, in fact, that after the fanzine’s five-issue run, Paringaux and Irwin received a Myspace message from Nicola Formichetti, who was, then, a brash young hotshot of a stylist at London youth culture title Dazed & Confused. Paringaux, who had previously discovered (and then pilfered) an old student fanzine made by Dazed founders Jefferson Hack and Rankin, was elated. “I remember back then, we thought we’d end up working for these cool magazines — and Matt said ‘Hey, be careful what you wish for, because it might happen!’” 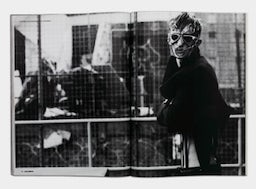 Before long, Paringaux and Irwin were working alongside Formichetti at Dazed & Confused, churning out cheekily provocative fashion stories and layouts — “Matt did his first ever cover, it was a really funny shoot with two guys sandwiching a girl on the cover, all naked, with massive penises on their heads” — and the three began to re-shape the magazine’s visual identity. “There was a real moment there. Nicola; it was Matt shooting; it was me designing and the magazine went from being this very cool, very London thing, but quite cold — Dazed historically [has] always had this kind of ‘too cool for school’ approach. And with Nicola, what we were doing was almost completely manga,” said Paringaux, who shares his half-Japanese heritage with Formichetti. “We just did really bright stuff, really punchy.”

Paringaux’s work soon prompted a phone call from McQ, the diffusion line of the highly decorated fashion designer Alexander McQueen, who requested a personal meeting. “He had this little baby brand that he loved, which was all about London, very bold, very loud, subversive, all about punk and subculture and rebellion and all those things that I was doing for Dazed, which I suppose caught his eye,” mused Paringaux, who was hired to oversee print materials for McQ’s advertising campaigns. “How many art directors can say their first campaign was commissioned by Lee McQueen? It’s a bit magical to think about it in retrospect.”

But after four years at Dazed & Confused, Paringaux started to feel somewhat complacent. “I got comfortable at Dazed after all that time, towards the end,” he said. “There were still great issues but like everything, you probably get a bit comfortable and I was just wanting to have a challenge again, and get hungry and excited again.”

Formichetti soon left to head up the newly launched Condé Nast men’s fashion biannual Vogue Hommes Japan and Paringaux seized the chance to follow him, splitting his time between London and Tokyo. “Shoots were much more considered. Credits were much more considered. It was a fairly different dynamic from the monthly,” he said. And the fashion shoots pushed the envelope even further. “Quite provocative. We did get in trouble a few times for doing a bit too homoerotic stuff, but it was fun,” Paringaux laughed.

When his appointment at the Condé Nast title ran its course, in 2009, Paringaux began plotting the launch of Meri Media (‘Meri’ is an anagram of the art director’s first name). At the time, rumours that Apple was going to launch a tablet computer had picked up steam and Paringaux decided he was ready to embrace digital media.

“One of the reasons why I worked in print for the first ten years of my working life was because I thought everything I had seen online was ugly,” he admitted. But for the first time, the iPad promised to bring elegance to web-based content. “It’s fascinating what you can do with paper. It’s super tactile. On a physical object, that’s what gives the object its luxury or its uniqueness. [It’s] something that could be called ‘finger candy.’ How do you translate that finger candy into digital?” he mused. 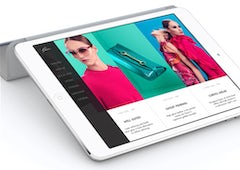 Today, Meri Media works for brands including Gucci, Stella McCartney and Lancôme, for which it develops digital campaigns, apps and editorial-style content. “In order to deliver this controlled editorial, advertorial experience on digital devices, we had to take on things like editorial in house, so we have some great journalists here,” Paringaux notes, pointing across the airy, light-filled office that hosts his 30-strong company. The company also likes to hire video game developers, who are trained to help conceive and code experiences that invite viewers to linger and interact.

In recent years, many luxury fashion brands have come a long way towards embracing digital media, but there remains much progress to be made, conceded Paringaux. “We’re going to witness a change of guard within those brands,” he predicted. “The people who are native to this technology, who didn’t have to learn it and grew up with it, basically are going to slowly come into power.”

So what advice does Paringaux have for young, aspiring art directors hoping to tap into what could be a new wave of digital fashion innovation?

“I don’t think it’s about learning something for a specific media, whether it’s digital, print, or who knows what the next thing is: projections, holograms. But it’s really about developing a strong aesthetic, a strong point of view and a very good process.”