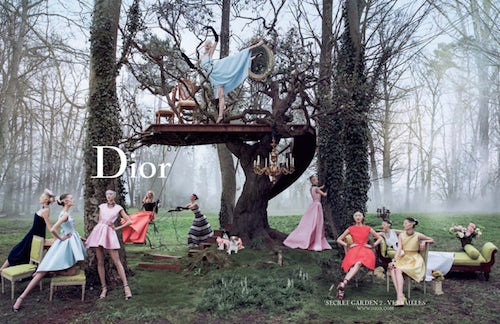 “I suppose I always sewed and made things,” Heath told BoF. “My mother sewed and painted, and did stain glass and ceramics, so I never felt that there was anything that I wasn’t entitled to do.”

Heath’s idiosyncratic way of imagining the world stems from her childhood in the Worcestershire countryside in the West Midlands of England. Although the pastoral surroundings provided plenty of space to dream, her aesthetic is intimately tied to her childhood home, and its contents, the result of her parent’s varied and fervent collection of objets d’art. “My home was quite a modern 1960s building that my father had built and my mother has a very strong aesthetic in everything. They both love Art Deco and the collision of really off the scale stuff — like ‘Oh my god what is that?’ — with very normal stuff.” Lladró ceramics were a favourite, in particular “a very glossy, pastel coloured ballerina; the clothes always had some form of suspended movement, like a dress that kicks out.”

But although Heath was always artistically minded, finding her future career path took time. “I loved looking at Vogue and I used to think, ‘Who does the shopping [for the sets]?’ I had this odd notion that I wanted to be the shopping person. The first thing that I made that was relevant to my career was a pair of giant moth wings for Jarvis Cocker in 1995. I was still at college, and I think, at that point, I realised that there was something to be done other than with clothes in imagery.”

Heath attended the University of Brighton to study fashion and textiles, majoring in print design, but took time off before her final year to spend 18 months doing a string of internships. “The best thing I ever did,” she said. “You get to work without having to decide on the path you have gone down.”

“I thought I wanted to be a print designer, but soon realised that the commerciality of it was going to over take the creativity. I learnt how to draw flowers off the top of my head, which is still very useful, but I began to feel like a drawing machine.”

A placement at New Renaissance, an art direction and set design partnership resonated however. “They did idents for the weather, so we created this dress made of umbrellas.” It was then that Heath realised “this sort of niche for fantasy within fashion, that wasn’t seasonal, that wasn’t commercial, that was more than just what it was selling.”

After graduating, Heath was offered a job at New Renaissance, heading up the costume department. “I was given a lot of responsibility straight away. I never had to assist anybody. My mistakes were the biggest learning mistakes I will ever make.”

Two years later, Heath struck out on her own. “I wouldn’t [advise young people to] assist. I would stamp my own creative path. Start up your own thing. Create. I don’t know how easy it is to [work for and then] leave somebody with a strong aesthetic and go do your own thing. I think you can’t help but be inspired.”

“We just did a shoot for Tim Walker for Italian Vogue — it’s not out yet, you will see it in a few months — with a huge cage [silhouette of a] man. The perfection of the whole body wasn’t quite working – but when he began to loose a limb, it was sort of falling off, it worked.”

Arguably, it’s Heath’s work with Walker that has earned her the most recognition. Indeed, together, the pair are responsible for some of the most thrilling fashion editorials of the last decade. Theirs is a world of offbeat allegory and surreal fantasy; of giant dolls and toy soldiers, magic and play. 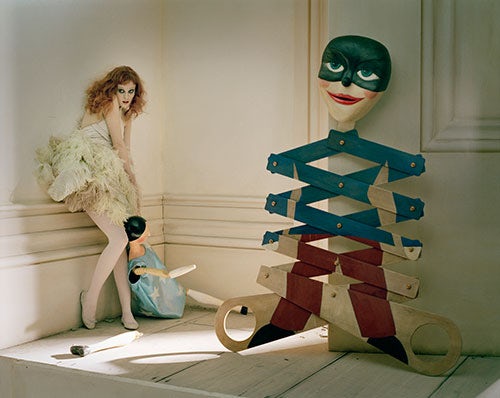 The two were introduced by a mutual friend, stylist Karen Hamilton. “I first went to his house and took all my sort of funny little sketch books,” said Heath. “I think we definitely have our roots in exactly the same sort of thing. Tim is probably a bit more romance and fantasy, while I have a slightly darker and surreal side. But together we are very good. We really have a synergy. It’s always very Heath Robinson [an eccentric English artist, satirist and illustrator, best known for his drawings of absurdly complex, makeshift machines] — or the best things are.”

The assignment varies dramatically by client. “Sometimes, for example with J.Crew, they will come and say, ‘We have got this store on Regent Street and we don’t know what to do — do something fantastic. Then, I would pitch three ideas – normally to help myself not to be so precious about one.” Ultimately, Heath suspended unicorns and London cabs in rainbow shades above the store. 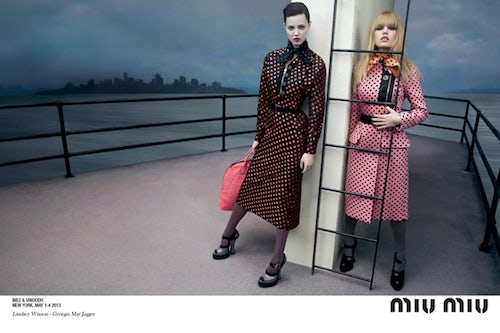 Even after a pitch has been approved, last minute changes are a constant possibility. “Originally my role in [Miu Miu’s AW13 campaign] was to go in and change some balustrades, get a couple of nice bits of street furniture and some bikes.” But when Miu Miu realised they couldn’t shoot the New York skyline without image rights, “They were like, ‘What can you build?’ and I was like ‘Oh my god, ok.’ So, I built the pontoon. I had a week.”

Heath created New York’s East River using acres of stretched cling film and used old-school perspective techniques to give the resulting image the illusion of depth. “We weren’t saying it was real — it had this sort of bizarre surreal feel to it.”

Heath has also created sets for runway shows, most notably a life-sized willow tree for Lanvin in 2011.“On the day before the show Albert [Elbaz] walked in and said, ‘I am not sure about the tree, can you take it down?’”

“It was vast. It had taken about 48 hours to put up and would have taken a day to take down. I remember thinking ‘Oh my god,’ and saying, ‘Yes, yes I can take it down, but I will have to know in the next 20 mins, so just let me know. I can get the guys working on it straight away.’ He looked at me, at [the tree], paused, considered and said, ‘No, no. I like the tree.’ I just know that had I said no, I would have had to take it down. [The work] had to stand up itself.”

“When somebody goes, ‘It’s not working,’ you need to be amenable, because it is not about you.” Heath’s studio on Shacklewell Lane, a veritable hub of British creatives (neighbours include Christopher Kane and Gareth Pugh) is surprisingly uncluttered. Heath believes the photograph or the show is the true end product, not the props she creates, and thus doesn’t archive her work. Nestled in the corner, however, partly hidden by a slowly deflating owls head, this reporter spots a pair of black men’s oxfords fitted with glittery platypus flippers, in gradients of bronzed sienna. They are typical Heath. “We made a whole duck costume, Tim took one look and said ‘I don’t like it,’ so it was discarded immediately. Even if you think the photographer is wrong you have to just respect it.”

Heath’s flexible attitude clearly works. “Everything has always snowballed off the back of somebody I have worked with. The role of an agent is to get you work, but I can honestly say that mine hasn’t had to work very hard — the work has always propelled itself. Though to manage my career they have had to work hard. Negotiations, budget sign-offs — for example, with a lot of the sets, like the Miu Miu set, you can spend £70,000 (about $115,000) in a week.”

Heath’s career is not one of glamorous play, however. Hers is often the trudging and laborious, mud-splattered reality behind the manicured, highly-produced images. “Quite often you can’t get a vehicle to where you are shooting. You have to traipse across a field with a giant fake tree and half a house that you have brought to Versailles from England, because you can’t touch the trees there. And invariably it is pissing down with rain,” she laughed.

Being resourceful is also a big part of the job. “I wanted golden bulrushes for this Mulberry Harrods window, which we couldn’t find anywhere. We didn’t have money to have them carved. So, it had to be something that we created at the studio. They’re metal rods, a fake frankfurter sausage and the end of a knitting needle on top. I think Ange, my assistant, had already tried filling condoms with some kind of expandafoam!”

“But I would have no interest in making something look real when actually they would prefer the real thing.” Making the absurd hyperreal however, is something Heath revels in, “like the bread airplane for Hermès, which was totally silly. I had a great French assistant at the time and we were in Paris doing a Dior job, talking about the propeller and the wheels and she said, ‘Why don’t we go and see if we get those things baked?!’” 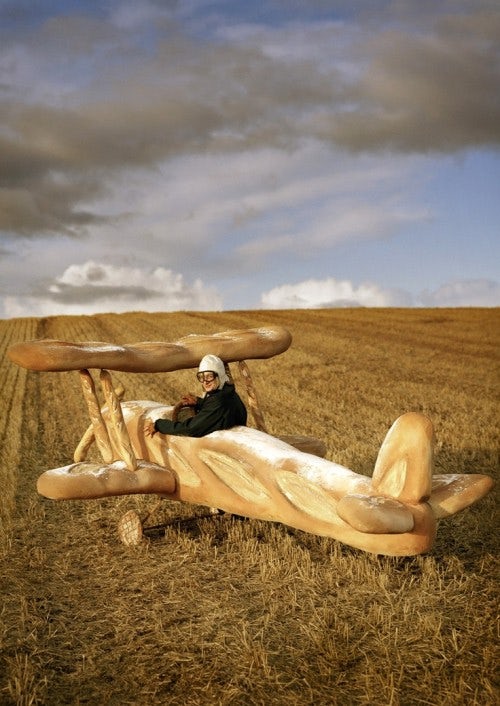 Like much of her exquisitely realised fantasies, the result creates a child-like acceptance of the fantastical. And, indeed, through her work, Heath has achieved what every child wishes, making real her unfettered imagination.