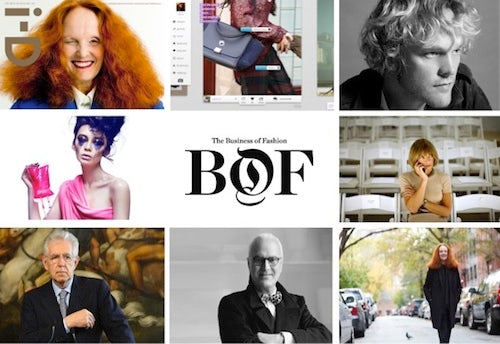 Op-Ed | Toxic Chemicals in Clothing Make All of Us Fashion Victims (Opinion)
"Nobody wants to be a fashion victim. Desperately chasing the ever-elusive ‘cool,’ fashion victims are generally perceived as ‘try-hards,’ those who sport the latest trends and buy into transient fads, regardless of fit or personal style."

The Next Chapter of Content and Commerce Integration (Fashion 2.0)
"Since the very birth of fashion magazines at the end of the 19th century, editorial content has been a powerful generator of consumer demand for fashion products. But the path between inspiration and transaction — between content and commerce — was fragmented and full of friction."

Always in Fashion (NY Times)
“Of course, Ms. Coddington’s frankness and profanity, as well as her differences from her boss, are precisely what first endeared her to a mass audience three years ago, when she emerged as the unexpected breakout star of R. J. Cutler’s documentary about Vogue, ‘The September Issue.’”

Anna Wintour: beneath the bob (Telegraph)
“Straight-backed, un-upholstered, and cast of tempered steel – the chair from which Anna Wintour commands American Vogue looks every bit as uncompromising as its owner’s reputation. Yet once sat upon, Wintour’s editor’s chair proves a revelation: it’s rather comfortable.”

Manolo Blahnik: ‘There is nothing charming about a woman who cannot walk in her shoes’ (Guardian)
“The tremendously satisfying thing about Manolo Blahnik, the man, is that he is exactly the way you picture him. The singleminded fashion obsessiveness of Anna Wintour is spiked with the belle-epoque-bonkersness of Ab Fab’s Patsy and housed in the body of Hercule Poirot.”

Why Peter Dundas is Pucci’s prince of prints (The National)
“The last thing you expect Peter Dundas to be is the fashion guy. From his sheer physical presence, he’s a car man maybe, a surfer or a quarterback – the sort of guy who rides a motorbike that roars like a chainsaw. What he is, is in fact “the prince of prints” – the creative director of Pucci, the Italian luxury label.”