Levi’s Commuter Trucker jacket embedded with Google’s ‘Jacquard’ technology aims to bring practical purpose to wearables. BoF sat down with executives from Levi’s and Google to walk through the evolution of the product and gauge its market potential. 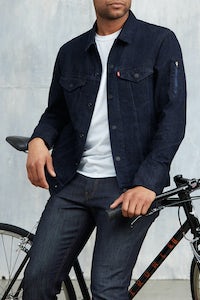 Levi’s Commuter Trucker jacket embedded with Google’s ‘Jacquard’ technology aims to bring practical purpose to wearables. BoF sat down with executives from Levi’s and Google to walk through the evolution of the product and gauge its market potential.

AUSTIN, United States — “Rejections.” That’s what Google first experienced when it broached the topic of “wearable tech” with high-ranking members of the fashion industry. “When we started talking to various brands and corporations, we received rejections of technology as something foreign,” Google’s Ivan Poupyrev recently explained. “We had to speak the language in order to close the gap, to reduce this skepticism. Textile is the only way to do it.”

The realisation that the future of wearable tech in fashion goods was going to be more about smart textiles than gadgets, like Google Glass or the Apple Watch, was the impetus for the Silicon Valley giant’s Project Jacquard initiative, borne out of its Advanced Technology and Projects (ATAP) group. According to Google, “Jacquard makes it possible to weave touch and gesture interactivity into any textile using standard, industrial looms. Everyday objects such as clothes and furniture can be transformed into interactive surfaces.” Its first consumer product, a trucker jacket developed in partnership with Levi’s, is set to arrive in stores in September 2017 after a several-months delay.

At 2017’s South by Southwest Interactive festival in Austin, Texas, Poupyrev, who leads Jacquard within Google’s ATAP Group, and Paul Dillinger, Levi’s head of global product innovation, kicked off what is likely to be a months-long roadshow promoting the $350 machine-washable denim jacket, which allows a wearer to control a mobile device through a patch of fabric on the left-hand sleeve cuff. A dongle, which Google and Levi’s have dubbed the “Jacquard Tag,” is hooked into the sleeve, providing connectivity between the sleeve and the device.

Through an interactive haptic motor and LED lights, the wearer can receive alerts — such as an important phone call — and do things like pause a song, check the weather or plan a commute. “I want to be able to sit down to dinner and not have to look at my phone,” said Dillinger. “There’s a rich set of input and output engagements.”

But are those inputs and outputs enough to make “Levi’s® Commuter™ Trucker Jacket with Jacquard™ by Google” — as the product is officially named — popular with real consumers? BoF sat down with Poupyrev and Dillinger to walk through the evolution of the product and gauge its market potential.

BoF: Why did Google set out to develop something like Jacquard? 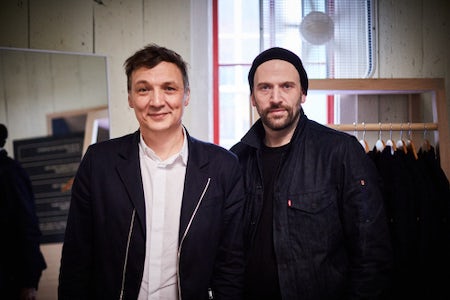 Ivan Poupyrev: There are multiple reasons. One reason is that we’re interested in wearables. One of the things that was constantly coming through is that wearables are not fashionable. But on the same loom you can manufacture millions of shapes and colours and patterns. That bridges the gap between the technologies and aesthetics.

When we started thinking about smart garments, we thought that in order for technology to be a part of apparel, the most difficult part is the question of authenticity. In fashion and apparel, people often think about it as the look and feel, but it’s the story and authenticity behind apparel that makes fashion, fashion. It’s not just pretty fabrics or pretty colours, it’s the creative process. It’s the way people approach apparel design.

Google is not an apparel company; we don’t have the DNA necessarily. Engineers think functionally, artists think holistically. I took [Jacquard] to Levi’s and Paul and the creative team there, and it suddenly became something that felt authentic to them. They came to the understanding that [a wearable] could be part of the garment without feeling like this foreign device.

BoF: Paul, what made this proposition appealing to Levi’s?

Paul Dillinger: This loom was making denim for us before we were working on this project and will continue making it for us afterward. One of the genius components of this technology is that Google worked diligently to engineer it so that it could be worked into the existing supply chain. This is not an invented supply chain, this is the apparel supply chain.

When everything can do something, there’s no one thing that has to do everything. What if everything in your life could do important things? That’s where we see the potential. It crystallises why we got excited about this — the idea that a garment can suddenly do more than it has ever done before. It’s important to introduce people to the idea of a really engaging, delightful experience.

The first time you swipe out and your favourite song plays, there’s a sense of delight that can only be captured through experience.

BoF: Though not yet available for sale, the project has been out there in the media and elsewhere for three years. What are people not getting thus far?

Dillinger: We speak to that with the nature of this installation here. The thing that can’t be understood from any talk, any article, any discussion is the giggle when the jacket, heretofore inert, suddenly becomes active. When the jacket talks to you with that little vibration, to cue you to glance at your sleeve, and that light reminds you of the person that you love enough to let them bother you on your ride home. Or the first time you swipe out and your favourite song plays, there’s a sense of delight that can only be captured through the experience. So it was important for us to create an experiential activation. First, you see the magic of the swipe, and then you get to try it on in your size. You see that it is not a concept, but an object of industrial apparel produced in multiples. We needed people to touch and feel and learn that this thing is coming this fall, at a price point that is very accessible.

Poupyrev: What is new compared to previous work on our side was the deep exploration of the concept of the software platform being a part of the garment. I’m for wearables, but they are single-function devices. The problem is that there is a very rapid fragmentation. In our case, we are using the platform of clothing to overlay the platform of software. The philosophy, the deeper you think about apparel, the more you realise that apparel has meaning. You have to make any functionality reconfigurable — it has to be flexible. It’s the constant flow of life where the garment is your friend. It took a year to articulate this. Articulating the vision requires a whole new language. It will be crystallised by the launch in September. 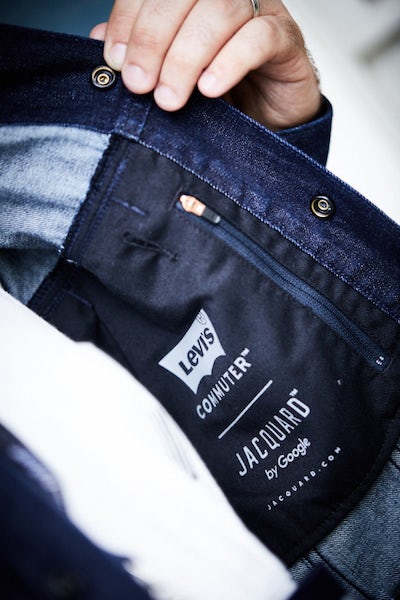 A detail of the Levi’s Commuter Trucker jacket | Source: Courtesy

Dillinger: I also think the potential of our understanding for the purpose and value of the object is going to evolve. Levi’s has sustained relevance, but has always prided itself in making objects of lasting value. There is a reason why people participate in cycles — we do love trends — but there is potential here for a new expectation for the garment to emerge.

For us, it’s about being able to still satisfy that appetite for seasonal change, but with that change taking the form of the reconfiguration of digital value, rather than changing the object. There’s a potential notion of emotional durability. Let’s imagine other ways of approaching the sustainability challenge. Even though the trucker jacket is an enduring style, we continue to do different iterations. This might be designed for a bike ride, but it’s conceivable to configure it for a music festival or a night out. It goes well beyond any other garment’s potential use. You create a real resonance and friendship with the consumer in the way that’s quite new.

Expectations: First and foremost, Levi’s® Commuter™ Trucker Jacket with Jacquard™ by Google promises to make bike rides safer and less stressful by reducing the need to reach for one’s phone to see the time, check directions or answer a phone call. The jacket can also be used in more casual settings for those looking to reduce overall screen time. But to work, the garment would need to look good — with embedded technology that was seamless and barely visible — in order to retain its sartorial integrity and not feel like a gadget. Given the caliber of the players involved and the seeming depth of the partnership, expectations were high — and yet wearable tech has largely failed to excite.

First Impressions: The jacket retains the look of Levi’s traditional Commuter Trucker style, with its elongated tail for extra coverage and utilitarian design features like a stretch-denim back that allows for ease of movement. It is also made of out of traditional 3x1 indigo denim woven on the same looms as Levi’s other products. There is nothing wonky, or overwrought about this jacket. For the target audience — bike commuters looking to make their ride more pleasant — it delivers. And the magic of the interactive patch, which lights up in different colours when touched or tapped, is genuine.

But while the lightweight Jacquard tag — which works with the technology woven into the fabric to send messages to the wearer’s phone — clips easily into the sleeve and is subtle in its design, it will still be a hang up for some people. What’s more, the most successful wearable devices — even the Apple Watch, which sold 6 million units worldwide during the fourth quarter of 2016 capturing 80 percent of the smartwatch market, according to research firm Canalys — boil down to one thing: fitness. (A 2016 survey found that 79 percent of Apple Watch wearers use it for health and fitness monitoring.) The percentage of commuters who will find the jacket’s limited capabilities meaningful or necessary — no matter how charming they are — may be slim.

Most Potential: The fabric itself is a testament that wearable technology can be beautiful and elegant when it is embedded directly into something. On this 3x1 denim, the Jacquard technology is woven so seamlessly that it’s impossible to detect with a quick glance. At Google and Levi's presentation at SXSW, a board featuring flaps of material woven with Jacquard in a Japanese mill used by Lanvin, Chanel and Prada — a candy-pink cotton overlaid with a geometric pattern, a marled tweed — further illustrated the beauty of the technology.

What is perhaps the most compelling element, though, is that fact that you refresh it with software updates. Dillinger, who also leads Levi’s sustainability efforts, believes this kind of technology has wider potential to offer newness without waste, and there is something to that notion.

What’s Missing: Google and Levi’s have designed a viable, engaging piece of wearable technology. As Dillinger noted, “The potential of our understanding for the purpose and value of the object is going to evolve.” But this denim jacket will only serve a small subset of people who must sign off on the design and find the technology useful. It would be exciting for the two entities to collaborate on more products that solve a wider range of problems. For instance, adding payment capabilities or voice recognition, two features currently impossible to implement through Jacquard technology. Until that happens, this jacket will remain a novelty.

For Fashion Brands Flocking to SXSW, What’s the ROI?