BoF’s latest special print issue focuses on America, the world’s largest consumer market and greatest exporter of cultural and technological change. Who better to decode the state of the nation and its fashion industry than our cover star, Anna Wintour? 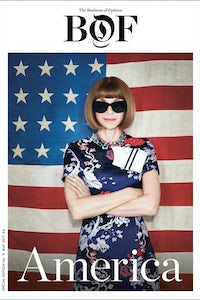 BoF’s latest special print issue focuses on America, the world’s largest consumer market and greatest exporter of cultural and technological change. Who better to decode the state of the nation and its fashion industry than our cover star, Anna Wintour?

The Business of Fashion is proud to release our latest special print issue in partnership with QIC Global Real Estate. This time, we focused our lens on America.

LONDON, United Kingdom — It’s been a rip-roaring start to 2017, and all eyes are on the USA. From the skyscrapers of New York City to the buzzy parties in the Hollywood Hills and the “unicorn” start-ups of Silicon Valley, everyone, everywhere across the nation — and around the world — is trying to navigate the risks and rewards of doing business in Donald Trump’s America.

The fashion industry is no exception.

On the surface, things look positive. Consumer confidence in the USA is at its highest level since 2000, having surged since Trump’s election victory last November. Unemployment is at 4.5 percent, the lowest level since the financial crisis of 2007. Stock markets have reached all-time highs, with the Dow Jones Industrial Average surpassing the 20,000 mark for the first time in January and sustaining that record-breaking milestone into April, just as we went to press.

And yet the retail sector has taken a turn for the worse, as a general malaise has grown into a full-on crisis. Since January, a wave of bankruptcies has washed through the fashion industry with restructurings at American Apparel, BCBG Max Azria, Nasty Gal and The Limited. There is talk of deep problems at Neiman Marcus, Payless Shoe Source and Bebe. Meanwhile, Macy’s, J.C. Penney, Sears and Kmart are in the process of closing nearly 400 stores. According to the US Bureau of Labor Statistics, 30,000 retail jobs evaporated in the month of March alone.

The political backdrop has been no less chaotic. The election of Donald Trump has triggered widespread dissent. The Women’s Marches, held in more than 400 cities across the country the day after the inauguration in January, culminated in the largest single-day protest in US history. Trump’s controversial immigration ban has sparked outrage and judicial intervention; diplomatic dust-ups with Australia and Mexico have put traditional alliances in jeopardy; and threats of all-out war loom in North Korea and Syria. And that’s without mentioning the US administration’s war on the media, its Russian entanglements and its threats to impose a crippling 20 percent border tax on imports.

Meanwhile, in Silicon Valley, the rise of new technologies, from robotics to artificial intelligence, promises an altogether different future, while destroying elements of the economic and cultural past. Times are changing and in many ways, America — still the world’s largest consumer market and greatest exporter of cultural and technological change — is at the centre of the storm.

BoF’s latest special print edition is our assessment of this fast-changing situation, providing an in-depth, forward-looking lens on the business of fashion in the USA.

Our first port of call was the office of our cover star Anna Wintour, the most powerful figure in fashion, who over the past three decades has become not only editor-in-chief of American Vogue and artistic director of Condé Nast but also a kind of head of state for American fashion more broadly. As Condé Nast’s chief executive Bob Sauerberg said to me, if there was a president of fashion, it would certainly be Wintour, who gives us her take on the current American reality.

Perhaps one of Trump’s most controversial positions has been his stance on immigration, a cornerstone of America’s historical economic policy. In April, almost 1,500 economists — including six Nobel laureates and members of the Reagan, Bush Sr, Clinton, Bush Jr and Obama administrations — signed a letter to the current president and the congressional leadership affirming that immigration is good for the American economy. “Among us are Republicans and Democrats alike. Some of us favour free markets while others have championed for a larger role for government in the economy. But on some issues there is near universal agreement. One such issue concerns the broad economic benefit that immigrants to this country bring,” they wrote.

To underscore this point, we spotlighted the talented immigrants at the creative helms of four of the greatest American fashion brands: Calvin Klein, Coach, Diane von Furstenberg and Oscar de la Renta as they reposition themselves for today’s new retail reality.

Elsewhere in the issue, we provide a sobering, in-depth analysis of doing business in Trump’s America, and explore the mall brands of Columbus, Ohio, which have long suffered from generational and technological change. And we also try to understand how Trump’s conservative social and domestic policies jive with a new wave of politically active fashion designers representing a more inclusive and fluid definition of American identity.

But there are clear opportunities in today’s America too: for instance, the rise of fashion entertainment and the coming of so-called “sewbots.” In Hollywood, the ringmasters of American entertainment at behemoths like WME-IMG and CAA have their eyes firmly fixed on the opportunity as fashion becomes a bona fide pillar of popular culture. Meanwhile, over in Atlanta, Georgia, a start-up has become the face of a new industrial revolution in garment manufacturing, giving birth to robots that can produce fashion goods with little human labour.

Finally, I’d be remiss in not mentioning our own American expansion and the opening of BoF’s new office in New York City’s SoHo, populated by our small but growing editorial and commercial team, including Lauren Sherman, Chantal Fernandez and Johanna Stout. We are all looking forward to working more closely with our American partners at this time of great change in the fashion industry. With our eyes and ears on the ground, you can count on more agenda- setting reporting and analysis, as well as innovative commercial partnerships, in the years to come. This is just the beginning of our own American story.

To order your copy of BoF's ninth special print edition, with delivery anywhere in the world, visit shop.businessoffashion.com.