Jonathan Anderson is still capable of extremely sophisticated effects, but his intentions here seemed much more aligned with some kind of spiritual response to “the complexity of modern life”​.​ 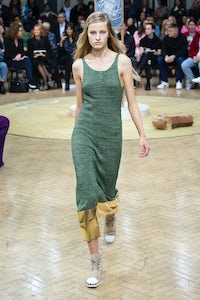 Jonathan Anderson is still capable of extremely sophisticated effects, but his intentions here seemed much more aligned with some kind of spiritual response to “the complexity of modern life”​.​

LONDON, United Kingdom — Jonathan Anderson prepped us for his latest show with a cryptic Instagram image of crop circles. The first thing we saw on entering his venue was a circular rush mat placed dead centre in a spiral of seating. Round and round his models walked. No more the up and down of the narrow catwalk corridors that previously defined his staging. Backstage, Anderson’s mood was meditative. Tanned, blonded by his summer holiday, he looked and sounded relaxed. There was much less of his usual abstract musing. “Once you put something out in the world, it comes back again,” he said. That’s the kind of observation that goes well with a picture of crop circles.

And, if you liked, you could also attach the ides of eternal recurrence to this collection, with its echoes of the nonchalant Ibicencan vibe of Anderson’s collections for Loewe. There was the same casual, homely quality. The designer liked the idea of reusing and recycling. It was most obvious in the basic pieces cut from what looked like Irish linen tea towels, but much of the collection was plain old sweatshirt jersey, washed, dyed and made into dresses, tops and skirts and witchy nightshirts that draped awkwardly and looked deliberately roughhewn (top-stitched bra cups have a habit of creating that effect). Then there was napa leather, washed of all substance, and springy raffia skirts, and footwear that stitched an espadrille sole onto a desert boot.

Words like “awkward” and “roughhewn” would usually have a pejorative connotation in fashion, but here they underlined Anderson’s humble design. “Sanctuary in clarity, simplicity and focus” read the shownotes. A repudiation of heedless sophistication, a reverence for plain human craft… it’s something that has been clear in his extra-curricular work: the exhibitions, the London pop-up. He is still capable of extremely sophisticated effects, like the liquid cascades of sequins “wetting down” his dry fabrics, but his intentions here seemed much more aligned with some kind of spiritual response to “the complexity of modern life”. He called it “The calm before a storm”. In the middle of the rush mat in the middle of the runway spiral was a kind of totem pole. Attached to it was a drawing by Isamu Noguchi, from Anderson’s own collection. Its subject? A man meditating.