The designer's latest collection was urban and sensual, but the finale called to mind the girly confections of some of London’s shining stars. 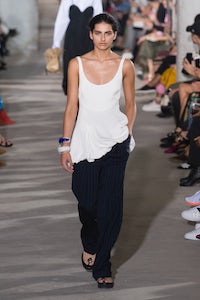 The designer's latest collection was urban and sensual, but the finale called to mind the girly confections of some of London’s shining stars.

NEW YORK, United States — Phillip Lim is a pretty balanced, cerebral kind of guy, so when he spoke of the contrast of "sweet versus sporty" for his Spring/Summer 2018 collection backstage, it wasn’t hard to divine the logic at play. For starters, he resurrected the 1980s (via 2000s) phenomenon of the bubble skirt, playing with sculpted volumes in poplin and crepe while posing them against the flat shapes of sharp-shouldered, deconstructed tailoring. He then moved that bubbling volume up and down the body; as a peplum, off the shoulder, or gathering mid-calf as a sculptural column.

Boy versus girl tropes came thick and fast too, with a mash-up of pinstripes, ruching, lace, football patches and jersey separates — the latter featuring bold rugby stripes cut-up and twisted into tube skirts and tanks. For those, Lim, always the culture vulture, referenced African dress, and in particular the wonderful way Ethiopian tribes both create and re-purpose fabrics. The effect was urban and sensual, whilst the finale was not. Reprising the ruffles of his opening looks full throttle, they encompassed swathes of chintzed cotton that called to mind the girly confections of some of London’s shining stars like Simone Rocha and Molly Goddard — even Simon Porte Jacquemus in Paris. Thankfully, done in Lim’s technical fabrics, they held their own crisp, flamenco-tinged appeal.