A Certain Stiffness at Salvatore Ferragamo

Fulvio Rigoni is exquisitely technical in his approach to fashion-making, but a broader vision is also mandatory. 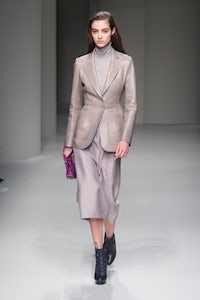 A Certain Stiffness at Salvatore Ferragamo

Fulvio Rigoni is exquisitely technical in his approach to fashion-making, but a broader vision is also mandatory.

MILAN, Italy — Fulvio Rigoni, now in his second season as design director of women's ready to wear, keeps looking for his own key to the Ferragamo identity. This sophomore effort looked more appealing that the previous one, if still a little patchy. Rigoni comes equipped with a five-star, super-strict minimalist pedigree: he was at Prada in the Nineties heyday, and later worked alongside Raf Simons at both Jil Sander and Dior. He his exquisitely technical in his approach to fashion-making: his pieces are ingeniously tailored and versatile in use. But that is just one element of building a whole identity. A broader vision is mandatory.

What came across, instead, was a certain stiffness, a certain coldness, despite the clear attempt to grab an air of sensuality. Rigoni was after a lean 1940s silhouette, which he cleaned up. That came out well. But the looks had something dry to them, and that was not lifted by the high slits and higher heel. It would be interesting to see the Ferragamo woman really let go of all this control. It would be perfectly in synch with the founder's freewheeling experimentalism.