A Commitment to Calmness at Loewe

There was a harmony in the alluring, shruggy casualness of the collection — a quality that Jonathan Anderson should be able to take all the way to the bank. 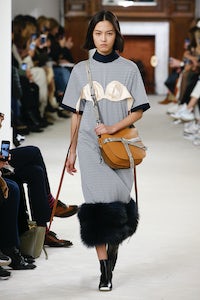 A Commitment to Calmness at Loewe

There was a harmony in the alluring, shruggy casualness of the collection — a quality that Jonathan Anderson should be able to take all the way to the bank.

PARIS, France — Jonathan Anderson has turned his fashion shows into aesthetic experiences above and beyond the simple appreciation of clothes. There is art on the walls, sculpture in the stalls and, for his Loewe show on Friday morning, there was seating in the style of Edward William Godwin, dubbed “the Godfather of the Modern Movement” for his influence on the Arts and Crafts revolution in 19th century England. On every chair, there was a classic work of literature – “Madame Bovary” or “Dracula” or “Don Quixote” – bound by Loewe and wrapped in an image by Steven Meisel, who collaborates with Anderson on the brand’s campaigns. Classic vs. radical: such a meticulously detailed environment automatically creates an atmosphere which encourages a heightened appreciation of Anderson’s clothes. It’s an occasion he has proved himself more than capable of rising to. And so it was on Friday.

Loewe was a heavy proposition when Anderson took it over, a 167-year-old Spanish fashion brand stolidly grounded in classic bourgeois dressing. He’s worked magic, applying a lighter, more sensual touch. Today Loewe is less Madrid, more Ibiza. But the designer has evolved along with the brand. Now he feels he’s in a position to harmonise the two extremes. Why? Because he feels it’s right. Loewe’s DNA is, after all, urban, sophisticated, dressy, and well-leathered. Not at all about the free spirit moon-dancing on a Balearic beach.

For anyone enamoured of Anderson’s Loewe, his new attitude might have sounded threatening, rather than promising. On the catwalk, it didn’t turn out like that. He said he was committed to calmness, “removing noise." An anonymous male voice on the soundtrack counselled spiritual wellness in the most convincingly tranquil tones, and even Anderson’s most structured “old Loewe” proposals were softened. “tailoring where you remove everything,” he said. “It’s about fragility.” Although it wasn’t necessarily fragility radiating from a soft-shouldered houndstooth coat with leather collar and matching bag. Or a suit, also houndstooth, with plunging neckline and sleeves slashed open to form a cape. These were powerful images.

But this last look did fit with Anderson’s desire to air the clothes out by pushing them away from the body. Jersey dresses were wadded along the hem so they undulated when the models walked. Suede and leather were intercepted with lace to create textural clashes within the one garment. And the most Anderson/Loewe dresses suspended fabric on spindles of coloured thread, exposing skin. It was the result of his research into “floating architecture” and it was the consummate expression of his fascination with (de)construction, or the most artisanal use of cloth.

Earlier this week, another designer was talking about a body of early Cindy Sherman work which the artist had called “A Play of Selves." That idea came back to me while I was watching the Loewe show. There were so many different types of women here. The harmony was in the alluringly shruggy casualness of it all. It’s a quality that Jonathan Anderson should be able to take all the way to the bank.