A Conceptual Haunting at Armani Privé

Giorgio Armani's nod to the late Franca Sozzani was largely conceptual, present more in the restraint that permeated than in the collection itself. 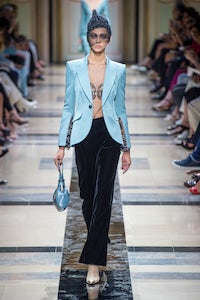 A Conceptual Haunting at Armani Privé

Giorgio Armani's nod to the late Franca Sozzani was largely conceptual, present more in the restraint that permeated than in the collection itself.

PARIS, France — A striking coincidence that, on the same day of the haute couture collections in Paris, two of fashion’s elder statesmen should show collections that were somber, reflective and measured in their pacing. Not nostalgic, but definitely haunted. In Karl Lagerfeld’s collection for Chanel, you could feel the presence of Gabrielle (a perfume bearing her name was being launched on Tuesday night). Rumour had it that the spirit infusing Giorgio Armani’s collection was Franca Sozzani, Vogue Italia’s editor, who died at the end of 2016.

There was nothing of her Bohemian style on Armani’s runway. Franca’s hair was an unruly torrent of golden curls. Here, every model wore a tight toque, covered with a veil. Which was one indication that the designer’s nod to the editor was largely conceptual, present more in the restraint and sadness that permeated the collection than in any specific design element. There was a moment when Sibelius’s "Valse Triste" insinuated itself into the soundtrack. That felt about right.

Not so peculiar, then, that a Gothic aesthetic permeated the room: the attenuation, the decoration, the models with their Boldini eyes, and the subtle sense of decay in a hem that dissolved into lace lacquered black or a bodice that seemed composed of a creeping velvet fungus. Black ruled. Colours were otherwise icy pastel, or the kind of luminous you’d find on creatures at the bottom of the ocean. Scribbled floral motifs and a spiraling pattern of words looked like Cy Twombly gone couture. And there were some huge ruffed collars which made me think the hats might actually be abstracted Pierrot headgear. Armani has often voiced his love of the surreal. It would certainly add a certain substance to this collection.