A Consummate Moment at Loewe

What stood out was the simple drama of these effects, clarifying the genius of Anderson at Loewe. 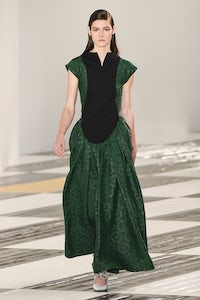 A Consummate Moment at Loewe

What stood out was the simple drama of these effects, clarifying the genius of Anderson at Loewe.

PARIS, France — You could read the rest of this, or you could just settle for WOW!

The most startling effect in Jonathan Anderson’s startling procession of designs for Loewe was created by a couple of dresses where it looked like a puddle had formed in the very heart of the fabric. The puddle was a plate of porcelain, created by a Japanese ceramicist named Takuro Kuwata. “I’d been begging to work with him for a while,” Anderson said, “Finally he gave in.” You may recall that Anderson reveres the craft of the human hand above all else. To work with a Japanese master was obviously a consummate moment for him, especially because Kuwata-san engineered his plates with the fabric of the dresses so that they became one whole thing.

The result was so odd but so seductive that it clarified the genius of Anderson at Loewe. He claimed he’d never really embraced the brand’s umbilical Spanish cord until this season, when he dived into the archive to explore old garments from the 40s and 50s. It was an era when Loewe, operating under the restrictions of Franco’s dictatorship, was interpreting designs from London and Paris in its own peculiar way. “Lost in translation,” was how Anderson described it. “It was like when Chippendale started making furniture in America. But the new dynamic actually made it more modern.”

Like the way he brought the Infanta shape into the 21st century. Or the way he modernised Velasquez panniers to create a subtly swelling hip. What stood out was the simple drama of these effects. Anderson was in Kyoto while he was researching the collection, and Japan provided its usual lesson in reduction to essence. “Stripping it back to one piece, or a two-piece look,” was his takeaway. “ I learned a bit more from working on my own collection about leaving out the noise and saying, ‘It should be just this, let’s not add that.’” This idea was most obvious in the embellishment, exquisite in its maximal minimalism. The “jewellery” was clumped on the end of clutch bags, or beaded at the throat or cuff of sinuous knits, like illusory chokers and bracelets. So everything actually was one piece — or maybe two. And the hats became the hair.

If the collection proved one extraordinary thing, it was that Anderson is a master of silhouette. Skirts and pants helped but I couldn’t help looking at the sleeves and thinking about how Cristobal Balenciaga, the greatest designer of all time — and a Spaniard, to boot — was continually challenged by how to shape the perfect sleeve. I doubt that was on Anderson’s mind but he offered some singularly creative options.