A Curious Compatibility at Thom Browne

The designer was driven by a pragmatic impulse, delivering a collection that was both accessible and conceptual. 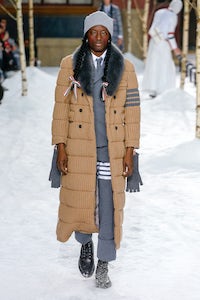 A Curious Compatibility at Thom Browne

The designer was driven by a pragmatic impulse, delivering a collection that was both accessible and conceptual.

PARIS, France — Thom Browne’s shows often evoke a dream state, a surreality that suits his clothes. His latest menswear presentation featured a winter wonderland, snow drifts, silver birches and camp stretchers, which were eventually claimed by several dozen young men in long johns. They were tucked into sleeping bags by a couple of solicitous male matrons. To sleep, perchance to dream? In earlier Browne exercises, the dream would have been realized as his models moved moodily through a peculiar landscape. But on Saturday, the designer was driven by a more pragmatic impulse. “I want to reintroduce what I’ve been doing in the last 10 years,” he claimed. “I felt it was important to say that this is what I do. Fashion tells us we should evolve with the trends. That’s not me.”

For all its seeming scale, the presentation was actually less conceptual than usual. And that matched the accessibility of the clothes. Browne said that he wanted to impress on us that his shtick wasn’t simply tailoring. He’d mastered sportswear as well. There might have been a hint of his seven-year stint at Moncler in the ribbing, cabling, padding and quilting. He said no, but it wasn’t such a negative inference because he always had a curious compatibility with that brand, never mind that it proved his imagination could rise to any challenge.

And so it did here, with the way in which his classic grey suit, the foundation on which Casa Browne is built, was transformed into a sleeping bag. That suit was one of Browne’s three original tailoring ideas way back when. He said he liked to give it a different spin each season. Another of the three is the grey flannel shorts which he himself is never without. Anticipating more frequent winter bomb cyclones, he showed them with huge puffy legwarmers. We looked and, if we’d didn’t like, at least we understood.

That mightn’t necessarily be the reaction Browne was hoping for. “I have no interest in showing something understandable,” he insisted. So his models sported Wee Willie Winkie caps, long braids and pinked cheeks, which made them look a little like mythical beings from a frontier fantasy. And yet, and yet…the clothes worked on so many ordinary levels. And that, for Browne, was extraordinary. “It says so much about where we started.”