A Dark New Dawn at Celine

Hedi Slimane’s instincts for the moment have dulled, but his army of ‘Slimaniacs’ will surely canter towards Celine stores in blissful ignorance of the brand’s recent glories. 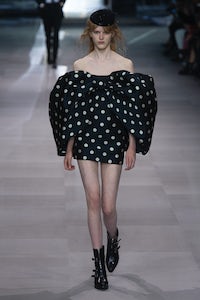 A Dark New Dawn at Celine

Hedi Slimane’s instincts for the moment have dulled, but his army of ‘Slimaniacs’ will surely canter towards Celine stores in blissful ignorance of the brand’s recent glories.

PARIS, France — There was no point in LVMH trying to replace Phoebe Philo at Celine. That kind of lightning doesn’t strike twice, and nobody wanted a pallid simulacrum. So, smartly, LVMH went seeking some counter-intuitive heat. They came up with free agent Hedi Slimane, trailing clouds of glory from Saint Laurent. Made no sense in the context of Phoebe’s Celine, but the two were so different that surely nobody would be silly enough to force a comparison. Except, of course, the global army of devoted Philophiles. Well, hey-ho to them because this was a new dawn, and LVMH was clearly confident that the Slimaniacs would balance them out.

A new dawn? It’s been a couple of years since Slimane was last feeding the catwalk. The planets have re-aligned. The renaissance of Gucci and Balenciaga, for one thing. The capitulation of the fashion industry to streetwear for another. And the continuing ascent of Saint Laurent in Slimane’s absence for yet another. There’s a lot of literature that says how hard it is to see your baby happy with another parent. You’re always going to want to show your baby who’s its daddy. That’s the beginning of more than a few horror movies.

And so it was with Hedi Slimane’s presentation on Friday night. It was a horror movie. Slimane is a genius impresario, a master manipulator who can turn the deletion of the accent on the letter "e" in the word Celine into a media event. Who can elevate the launch of a bag your granny might have carried sixty years ago into The Second Coming Of The Accessory. Who can build The Biggest Tent You’ve Ever Seen With The Best Sound System Ever for his debut.

Slimane has always had impeccable taste in music. French band La Femme, who’ve worked with him before, provided the soundtrack. Likewise, Slimane’s taste in art. His collaborator here was Swiss-American artist Christian Marclay, most famous for his enveloping 24-hour piece called The Clock. Marclay was responsible on Friday for the vintage comic visuals re-interpreted in sequins on jackets, parkas and pouf skirts. (The simple fact that they were more than monochrome made them show stand-outs.)

Then there’s Slimane’s impeccable instinct for dramatic mise-en-scene: the gigantic tent in which he staged his comeback, the fabulous mirrored churn of his backdrop, part-Conrad Shawcross, part-“Lady From Shanghai.” And his extravagant invitation, the book with its tear-out posters celebrating decades of Parisian nightlife, dark, decadent, lodging his Celine firmly in the city of its origin, in the time of day he loves best.

“Paris La Nuit” Slimane called his collection. “Journal Nocturne de la Jeunesse Parisienne.” A seductive notion that has shaped the artistic endeavours of writers, musicians, artists throughout the ages. But all of Hedi’s Herculean efforts, however seductive, were engaged in the elevation of… what?

The same old skinny black suits and skinny ties, the same old hiked-high-as-you-care dresses, the same old tiny bombers and bikers and Mod and Factory and New Wave and No Wave… it was frustrating because LVMH, Celine’s parent, has clearly thrown a tsunami of money against this launch.

But what we saw suggested that Slimane’s instincts for the moment had dulled. His influence shaped high street concerns like the Kooples and Zadig&Voltaire, not to mention Saint Laurent subsequent to his departure. And all his rock-a-biddy boys and girls were clustered hopefully in the audience on Friday night.

Everyone’s fervent hope was that LVMH’s deep pockets would help him surf that past to a glittering future. Sadly, not on this evidence. In fact, the counter-intuitive ploy of placing Slimane at Celine turned into something of an own goal for LVMH.

A brand that was once thoroughly identified with a peerless instinct for what women want in fashion all of a sudden looked like a gust of toxic masculinity. And not simply because Slimane struck an overpowering menswear chord — even if it was specified as “unisex” — at a brand that made its billions addressing women with a very particular sensitivity.

Caveat: I saw a leopard print coat sail past and it reminded me that, even at the height of Hedi’s dictatorial Saint Laurent spectaculars, any old person could walk into the stores and find something fabulous that fitted them. It was always all about the merchandising.

So, on Friday night, as a hundred thousand Philophiles beat their breasts and tore their garments, a sad fact reasserted itself. The modern world’s short memory doesn’t give a rat’s ass for heritage, and Slimaniacs will canter towards Celine stores in blissful ignorance of the brand’s recent glories.