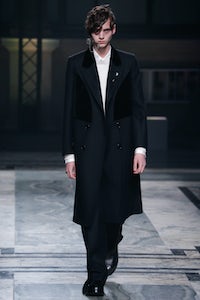 LONDON, United Kingdom — Charles Darwin was a supporting player in "Plato’s Atlantis," Alexander McQueen’s last show before his death. There, he was used as a prophet of devolution. Darwin's reappearance in the McQueen menswear show for Autumn/Winter 2016 was more positive. This time he represented a spirit of discovery of an innate curiosity, curating the wonders of Nature. Sarah Burton drew on Darwin’s specimen drawings for prints of fossils and the butterfly jacquards and embroideries that were the collection’s key visual motif. In the same curatorial vein, the Maharajah’s face jewellery and the silver talismans that ornamented suiting felt like souvenirs acquired from journeys to exotic places.

Historicism, romance and science: these were always ingredients in the heady McQueen stew, and it was reassuring to see them make such a strong comeback after Spring’s irresolute offering. The silhouettes were clear and classic, with the incontrovertible masculine edge only a military influence can bring: suits single- and double-breasted suits, trenches, greatcoats, a regimental-red cadet’s jacket.

Fabrics were similarly quintessential, with camel, pinstripe and grey flannel. Burton acknowledged her challenge backstage: same as ever, how do you make all that classicism feel relevant for now? The traditional McQueen response has always been to saturate everything with a decadent, decorative sensibility so intense that relevance becomes irrelevant in the face of sheer gorgeousness. It worked wonders in the women’s collection for Spring. And it worked almost as well here, in the monochrome florals, blossoming like flowers of evil, that were woven into coats and jackets. Burton said they were adapted from Flemish paintings (a particular fixation for McQueen himself). But there were plenty of other darkly alluring flourishes, like the band of chiffon that edged a soft-shouldered coat, the tulle-shrouded moths embroidered tone on tone on a pinstripe suit, or the silver chain harness of crosses and pearls that anchored a white silk tunic. That particular item accessorised Burton’s last collection for women, and it highlighted a compatibility between that and this one, which is high praise given that it’s not always been possible to place the McQueen man and the McQueen woman in the same room, let alone together. 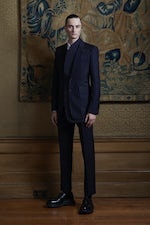 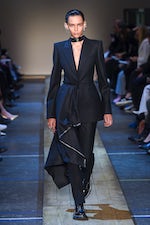 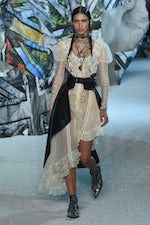 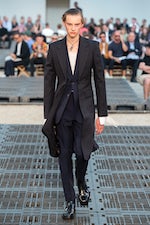