The raw apocalyptic glamour of the show was also a perverse tutorial in the art and craft of clothes-making. 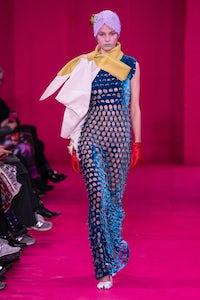 The raw apocalyptic glamour of the show was also a perverse tutorial in the art and craft of clothes-making.

PARIS, France — For 30 years, Paris has played a lead role in John Galliano’s life. The city’s been kind to him, and cruel too. He’s been up in Paris, but he’s been down and out as well, so his new collection for Maison Margiela wasn’t exactly a love letter to Paris. It was more a swirl of upcycled memories, deconstructed, reconstructed. The past is always with us. It seeds the future. The soundtrack was Malcolm McLaren’s “Paris,” a flibbertigibbet collage of sound that was spookily in tune with what the designer sent down the runway.

Galliano showed in a shabby hôtel particulier like the one that was the scene of his first triumph in Paris decades ago. He drew on the refined languages of haute couture and tailoring, which he has always spoken so well, with special attention to one of his own signature styles, the bias cut siren dress. The backdrop was painted an intense fuchsia pink (a colour that will always read as couture thanks to Christian Lacroix).

That all suggests a certain formality, which couldn’t be further from the facts on the ground. If I said Galliano deconstructed memories, I meant to say he tore them to shreds. From his early days at Saint Martins, he’s been partial to the notion of the bouleversé, turning clothes on their head. At Margiela, it’s been all about the decortiqué, stripping clothes to their bare bones. He loves the idea of revolution. So that’s what this new collection was. A dream of defiance, a fuck you to a fashion status quo that is crumbling, set in the city that fostered revolution and haute couture.

There are far too many clothes in the world. We know that. Galliano encouraged his team to go forth and multiply their thrift shop finds. Collect the emblems of cosy bourgeois conformity: the tweed jacket, the pin-striped suit, the trench coat, the Fair Isle knit, the school uniform, the silk scarf. Then hack and slash them, layer and invert them. Cut holes in the fabric (Rei Kawakubo's radical lace) or scallop it to make “sequins.” According to Galliano, “the bourgeois ideal of a column dress is infused with the mutinous parfum of a humble string vest.” Fashion quote of the season.

“Necessity creates the new luxury,” he intoned in his usual podcast. He called it “invention with a conscience.” But there was more. The raw apocalyptic glamour of the show was also a perverse tutorial in the art and craft of clothes-making. Watch, kids, and learn. One day, when the dust settles, you’ll need to know how to cover your bodies. Galliano talked about a new technique, “work in progress,” the way in which the act of constructing a dress or jacket was frozen at a key moment. A pinstripe sleeve hung off a shoulder hem, the gap filled by tulle. Massive coats, basted for the final cut, drooped unresolved off shoulders, their necklines unattached.

Galliano is a Trojan horse. He wanted his GenZ boys and girls to articulate his rebellion with the gestures of l’ancien regime. To walk like models, be conscious of their hands, held just so or clutching decorously at coats, or projecting a certain archness. The room held its breath for Leon Dame, last season’s one and only dominator. Here, he sashayed dreamily down the pink catwalk, one arm gracefully extended like a proper couture model in the Golden Age. Galliano would probably call it “the bourgeois gesture.” There was a time when he gloried in it, when he made couture shows that elevated traditions to untold heights of perfection. Now he’s painting cabbage leaves to put on girls’ heads instead of a Stephen Jones hat. These are crazy days and Galliano is in the right place.