In his debut collection, Daniel Roseberry staked his personal claim to house with an audacity that had a perfect, refreshing logic. Not all of his risks worked, but it was exciting. 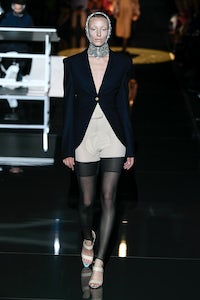 In his debut collection, Daniel Roseberry staked his personal claim to house with an audacity that had a perfect, refreshing logic. Not all of his risks worked, but it was exciting.

PARIS, France — “I just want to do my own thing,” said Daniel Roseberry the day before his debut at Schiaparelli. He felt the power of Elsa’s legacy, but it was like quicksand to him. “Pillaged and plundered by others,” he said. “I can’t do that at all.”

So Roseberry staked his personal claim to Schiaparelli with an audacity that had a perfect, refreshing logic. No wishy-washy trying to honour the past, submerging his identity in another’s. Roseberry stuck himself right in the middle of the catwalk at his design desk in a ballsy declaration of intent. THIS IS ABOUT ME, THIS IS WHAT I HAVE DONE. The soundtrack roared with train noise, the same noise that bombarded his studio in Chinatown under the Manhattan Bridge, where he spent 33 days straight in November working up a brand proposal for Schiaparelli’s owner Diego Della Valle. Then the trains gave way to the playlist of tracks he was listening to on his headphones as he worked on that proposal.

Roseberry was wearing those headphones while he sat at his desk on the catwalk. And, as he sketched, the models walked out in the outfits he was illustrating. Life imitating art imitating oh whatever…the presentation had a delicious surreal circularity that was absolutely in keeping with Schiap’s shtik, Roseberry’s reservations aside. It also extemporised on his decade spent with Thom Browne, fashion’s current master of surreal fashion theatrics.

And it was exciting. How often do you get to say that in fashion? Fashion’s game of musical chairs has largely been a rotating cycle of familiarity. Alessandro Michele at Gucci was the first headscratcher. Daniel Lee at Bottega Veneta came next. Now Roseberry. He’s been in Paris two months, found himself a swanky pad on the Rue de Rivoli. But, by his own admission, he knew no one in town. So he had a run at his first collection — couture, to boot — that was uninterrupted by good times.

That explained the focus: a story in three acts. The first, an extravagant daywear segment, including a navy cashmere tailcoat pieced with navy crocodile, a fiercely tailored black jacket over a provocative meditation on underwear as outerwear, and a black rawhide wrap skirt accessorised with a coiled python neckpiece in absinthe crystals. Daywear! The most telling look might have been the high-waisted skirt out of which spilled a massive organza blouse. Restraint and release — it told the story of a boy from a conservative Christian family in Texas who found his way to the fashion industry in New York and is now ensconced high above the Place Vendome in Paris in a studio that was once home to one of the most iconic designers in fashion history.

Exhausted by the day, we proceeded to night, where a white wool jacket with a black lizard-skin lapel packed a fetishistic punch that seemed simultaneously Schiap and Roseberry, but a strapless gown in black gazar had the power of pure couture.

Then came the third act, outside time and space, the place which Roseberry has maybe dreamed of for all these years. As nightmarish as a look crawling with enamelled ladybugs, as dreamy as rainbows of silk faille exploding in colour, as extreme as a wedding dress that went north in a cloud of white silk, like sperm exploding in water. Roseberry insisted he wanted a fashion orgasm. He got it.

He was clearly fearless. That was exciting. He took risks. Not all of them worked. His collection was an assault. We need it. In Roseberry’s notes, he wrote: “I thought often about the nature of creativity, and about how an artist forms his aesthetic only when he’s able to retreat to the purest, most childlike part of himself, the place in which nothing can be wrong and nothing can be bad, because everything exists in the realm of possibility.”

I’m sure Schiap was listening.