This was Olivier Rousteing breaking his own mold in every sense, delivering a collection that read as a total homage to Karl Lagerfeld. 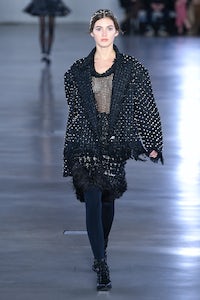 This was Olivier Rousteing breaking his own mold in every sense, delivering a collection that read as a total homage to Karl Lagerfeld.

PARIS, France — The Balmain army is feeling rebellious this season. In an act of defiance, clad in an array of tweeds, leathers, denim and vinyl, plus a ton of studs, the girls stepped off the signature towering heels to wear flats. The heels are actually still there, but the flats capture the new Balmain spirit and attitude.

Fresh: that's an apt adjective. Insouciant, too. This was Olivier Rousteing breaking his own mold in every sense. "For a while, I felt this urge to be Parisian, to use grand venues and to delve in that kind of narrative. Not anymore."

Balmain left the grand salons of the Hotel de Ville this season, choosing a vast, raw space in the outer suburbs of Paris as a venue instead. The underground space provided a club-like vibe. The Parisian spirit was still there, to be sure, but it was easier and more nonchalant. Was it rebellious? Probably. The adjective needs to be taken with a grain of salt, given that these are the upper echelons of luxury fashion. And that, most of all, fashion drives towards conformity, even more so when trying to solicit rebellious feelings.

Philosophical consideration aside, the collection read as a total Karl Lagerfeld homage, with its abundance of black and white, graphic forms and nouclé jackets.

Rousteing did not present the collection as such, though he professed admiration for Karl backstage. There was a rebellious Chanel vibe in the air actually, echoing Lagerfeld's seminal motorbike collection for the house. This was not an audition show, but when the Lagerfeld succession Game of Thrones begins, at some point, Rousteing should officially enter the shortlist.