A Funny State of Mind at Simone Rocha

There was a peculiar undertow — and a fearlessness — in Simone Rocha's latest collection. 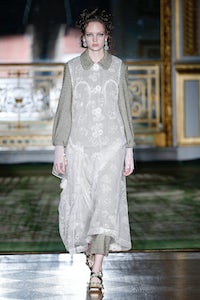 A Funny State of Mind at Simone Rocha

There was a peculiar undertow — and a fearlessness — in Simone Rocha's latest collection.

LONDON, United Kingdom — Valentine Ming McLoughlin was born twelve weeks ago and the changes wrought on her mother Simone before, during and after birth illuminated the collection she showed on Saturday. Perhaps ‘illuminated’ isn’t quite the right word for a collection that had such a peculiar undertow.

Rocha herself said she’d been in “a funny state of mind” for the past three months. So if she offered up plenty of the dark romance that is a Rocha specialty, she also added what she called a “surgical” element. We’ll take her word for that, but the minute she said it, a surreal hospital drama took shape: matrons in black double-breasted coat dresses; an expectant mother wrapped in a big pink hospital robe; models swaddled tightly, like newborns; bright red earrings, dribbles of blood; rough, artisanal tweeds, with huge, pannier-like pockets, perfect for carrying nappies and anything else a new mum might need. Those pockets were a feature of the whole collection. In a couple of outfits, they were coming away from the dress, worn to a frazzle. “Falling apart at the seams,” Rocha wrote in her shownotes. Well, that is at least one clear symptom of a funny state of mind.

Her brother Max provided the perfect off-kilter sonic underpinning. “I need rest,” Rocha also wrote. She wouldn’t find it while Suuns were playing. But she did find respite with angelic dresses in sheer tulle, delicately embroidered. The same tulle was made into overdresses, the breasts highlighted — a little like primal fertility figures. That’s the Celt in Rocha. And perhaps it was that pagan heritage that gave this collection its fearlessness. Although there is nothing as primal as the act of giving birth. 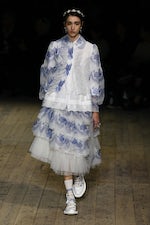 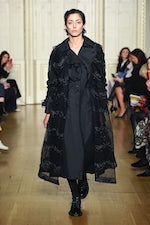 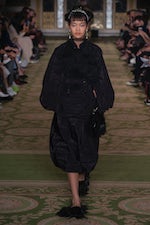 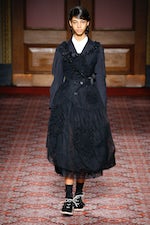 A Hint of Nightmare at Simone Rocha