A Hunger for Intensity at Prada

Miuccia Prada usually questions orthodoxy in a passive aggressive way, but this collection was infected with a no-nonsense grunge-y sensibility of resistance. 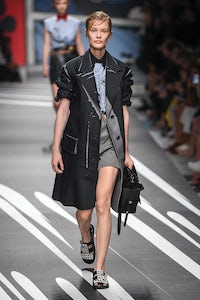 A Hunger for Intensity at Prada

Miuccia Prada usually questions orthodoxy in a passive aggressive way, but this collection was infected with a no-nonsense grunge-y sensibility of resistance.

MILAN, Italy — The young people Miuccia Prada spends time with believe there’s a war coming. Maybe that prospect infected her collection. “We are the last generation without a war,” she declared. MILITANT was her mot de jour, “not necessarily just for women but in general”. It translated into clothes that were fierce and graphic, partly due to Prada’s use of the work of female cartoonists from the last few decades, but also down to a no-nonsense grunge-y sensibility of resistance.

“I love those lesbians,” photographer Nan Goldin enthused to Prada after the show. That was how she interpreted the collection’s tough studded-sandal, sleeveless-jacket, shorts’n’tweed-coat union of male and female. Frederic Sanchez’s soundtrack worked an entire aural spectrum of the idea, from the melancholic sweetness of Suzanne Vega and Jimmy Scott’s astounding cover of "Nothing Compares 2U" to the spitting-tacks anger of riot grrrls L-7 and their guru Kurt Cobain. It was hard to miss the allusions to Cobain in the vintage-y floral dresses worn over pants.

If the musical accompaniment acknowledged vulnerability as well as female fury, the women in the cartoons that lined the wall and covered Prada’s clothes were fighters. Angela Davis was one of them. And I’d swear I saw Wonder Woman, though Miuccia disputed that. She would rather her women be distinctly un-super. “I wanted to see their human, simple, underestimated side,” she insisted.

But her collection wasn’t about humility (hence Angela Davis). Rather, there was a sense of the strength that comes through endurance. The youth cult subtext that has been a rich seam of inspiration for Prada in the past was once again mined for pieces that were here suggestive of rockabilly dress-up. The leopard print was this season’s deliberate engagement with a fashion element Prada dislikes. (It often works out very well for her when she utilizes something she despises, suede being a case in point.)

The use of the print underscored the particular, peculiar hybrid of past, present and future that is her design signature. The full skirt under the sleeveless jacket, the stripey shorts and the sleeveless top, the eerie palest pink twinset over a matching skirt were the kind of outfits that would slot effortlessly into a timeless David Lynch fantasia, because, like Lynch, questioning orthodoxy is what Miuccia Prada does best. She’s usually done it in a passive-aggressive way, but that trait didn’t seem so much in evidence on Thursday night. Instead, the collection she showed made you hunger for her next engagement. I predict a steady pre-war intensification.