There’s no denying the power of Jun Takahashi’s vision — as apocalyptic and alluring as his original inspiration for this collection, A Clockwork Orange. 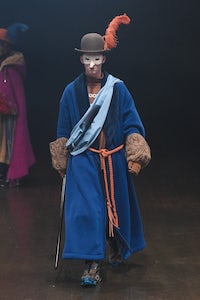 There’s no denying the power of Jun Takahashi’s vision — as apocalyptic and alluring as his original inspiration for this collection, A Clockwork Orange.

PARIS, France — Good lord, what is there left to say about an Undercover show at this point? There’s something surreal about the way Jun Takahashi digests and spits out time, space, art, fashion, music in a single mindblowing performance. But I realized this season that there is a common thread in all the ways he twists and turns. Jun loves GANGS, tight communities of souls bent to the same end. It might be good or evil, creative or destructive (or creatively destructive), but it’s that shared goal he’s entranced by. I’m sure there’s a childhood explanation. BTW, rock bands are gangs too. Look at The Beatles. Or the Sex Pistols. Jun found his gang in punk.

He called his collection The Droogs, after the ultimate gang, Alex and his mates from "A Clockwork Orange," Stanley Kubrick’s movie of the future gone very, very wrong. Takahashi saw it when he was a kid. He was shocked, but he found it sexy too. I remember that feeling when I saw the film. THIS IS BAD, I SHOULDN’T LIKE IT BUT I DO. A disturbed Kubrick withdrew "A Clockwork Orange" from distribution because too many audiences felt the same way.

Who isn’t drawn to a taboo? Takahashi’s invitation and his set were the same eerie snippet of a painting by Renaissance bad boy Caravaggio. Grabbing hands grab all they can. The catwalk filled with roving Renaissance rollickers, Caravaggio’s gang, in britches, tunics and huge, sumptuously coloured robes draped with sashes. But they’d borrowed from the Droogs: the perverse elegance of bowler hats and walking sticks, the creepy carnival masks. It was a dream hybrid.

Droogy references came thick and fast. Stills from the movie were reproduced on everything from parkas to socks, and the padded coats that are Takahashi’s signature piece. Sweaters were knitted with words from Nadsat, Droog slang as defined by Anthony Burgess who wrote the novel on which Kubrick based his film. PRESTOOPNIK – hardened criminal. DEVOTCHKA – girl. HORRORSHOW – good. In amidst the Droog references, it was easy to overlook what an expert craftsman Jun is – those knits alone! The show soundtrack was the movie’s soundtrack. Heavy emphasis on Beethoven, Alex’s favourite composer. Ludwig Van’s face was printed on a sweatshirt, a nylon coat, a puffa jacket.

Mere hours before the Undercover show, Pierpaolo Piccioli had shown the results of his collaboration with Takahashi: Valentino coats, jackets and knits printed or woven with Jun’s surreal mash-up of Edgar Allen Poe, UFOs and more of his Beethoven imagery. Where the Valentino version of the collab was starkly luxe, Takahashi kept it sportier, streetier — parkas, puffas, trackies, a gigantic V emblematic of the alliance.

Two designers working together in such a way has no precedent in fashion. But Takahashi specializes in the unprecedented. He closed his show with more Caravaggio Droogs, this time uniformly dressed in red, not so much a gang as a sinister cabal. On the soundtrack: Alex croaking “Singin’ in the Rain,” the accompaniment to one of the most disturbing scenes in "A Clockwork Orange." There were plenty in the audience who’d never seen the film, surely some who weren’t even aware of it. And there were those who knew it and loathed it. But none of them could deny the power of Takahashi’s vision, as apocalyptic and alluring as his original inspiration.