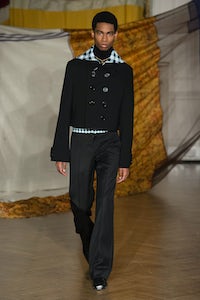 LONDON, United Kingdom — “At night there is almost nothing between the things we say and the things we mean.” In her shownotes, Grace Wales Bonner quoted Jamaican poet Kei Miller, one of 20 or so literary sources she cited in her typically methodical way. Her scrupulousness in saying exactly what she means (or vice versa) lends her own words about her work a dry academic specificity, which is curious when the work itself is anything but academic. But perhaps that contributes to its power. Wales Bonner’s collections have always pulsed with a distinctly erotic undertow, and there is little like the hint of a deep, rich inner life to add spice to art.

Sunday night's show was no exception. The designer was taken with the notion of a black sailor who’s been at sea for ages returning to his island home with a new perspective. “Leaving a place and looking back at it with a new understanding,” was her capsule description. The place she had in mind was a port, where a stew of influences, European, Caribbean, American, could come together in an environment without boundaries, where anything was possible, like the familiar classical themes rendered unfamiliar on the show’s soundtrack by a steel band, or Harlem artist Eric. N. Mack’s set of floating panels, which could have been a ship’s billowing sails or diaphanous curtains or fine upholstery. It was a fabulous idea, especially as it took form in clothes that borrowed something of the sailor in collars and cropped peacoats, added a sporting element in hoodies and sleek pants, and topped it all with the high fashion gloss of the fabrics and the attenuated tailoring that evoked YSL's scandalous Liberation collection. Stephen Jones made hats like sou’westers, some of the models wore jelly sandals. The high/low dialogue refracted Wales Bonner’s ongoing preoccupation with black male identity, but she pursued it with less rigour, more joy than usual. One of the collection’s high points was luscious prints based on Afro-American artist Jacob Lawrence’s paintings. Colourful, crowded, they represented for Wales Bonner “a soulful expression of collective identity”.

She used the word “creolité” to describe the process of finding oneself, although she acknowledged “something unresolved, slightly romantic” in the creole identity. Maybe Wales Bonner recognizes something similar in her own designs. It may be that inner life issue again. Still, her confidence was obvious on Sunday night, when the show’s single female model walked in a sleek ivory pantsuit. In a presentation ostensibly devoted to maleness, that image ruled.