A Languid and Languorous Feeling at Loewe

While his first men's fashion show for Loewe may have lost the humour and charm of his showroom presentations, Jonathan Anderson insisted it was good discipline. 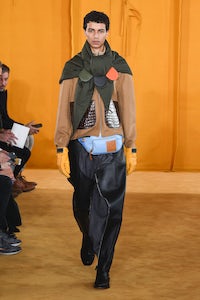 A Languid and Languorous Feeling at Loewe

While his first men's fashion show for Loewe may have lost the humour and charm of his showroom presentations, Jonathan Anderson insisted it was good discipline.

PARIS, France — One of the reliable pleasures of the last five years of men’s fashion weeks in Paris has been Jonathan Anderson’s presentations for Loewe. Entertainingly conceptualised by the French design duo M/M, they’ve usually been a surreal delight, and therefore a dream complement to clothing and accessories which often felt like they'd stepped out of a quirk-riddled artist’s fantasia. But on Saturday, Anderson broke with the past and moved his collection onto the catwalk. “We needed to show it moving,” he said by way of justification. “The business has quadrupled.” Serious, in other words.

He insisted it was a good discipline. When clothes are in motion, you get a very clear idea of whether or not they’re working, whereas an installation is more of a performance. If the up-and-down rote of the models lost the humour and charm of those witty tableaux in the Loewe showroom, it did highlight the peculiar appeal of this particular collection’s key piece. Anderson threw out a number of options to describe the flapping leather leglets most of the models were wearing. Chap boots? Gaiters? Fishermen’s wear? Early ’80s fetishwear? When Frank Ocean wore them zipped up on the designer’s Instagram, they did indeed look like chaps. On the catwalk, they were more like Argentinian gaucho pants (the vaguest connection with Loewe’s Spanish roots).

How do you take basics and make them fashionable? Anderson claimed that as his challenge with Loewe. Did he really mention cosmic playfulness? We’ve already addressed the chaps. Then there were elongated knits studded with semi-precious stones (Anderson compared them to a galaxy) and coats that exploded in a frenzy of yarn fringing, and a shirt which randomly featured a postcard-perfect rendition of Marilyn Monroe’s face. “Something so beautiful but incredibly tragic is a thread for me this season,” he said. Say what? There was scarcely tragedy in this collection of bright, poppy clothes.

But there was a languid feel, and maybe in languor there is melancholy (and maybe in melancholy there is a germ of tragedy). A couple of the long, tunic-y knits featured line drawings by the late Keith Vaughan. They were sad-ish. On the other hand, the languor of Anderson’s suits was anything but. He’s already showed them for women. “We kept the women’s waistline, enlarged the back so it swings forward.” The fluidity was tasty, the single white satin lapel on pinstripe supremely elegant.