For the first time, Costa has been indulging purely decorative tendencies that were previously shrouded in rigorous, monochrome lines. 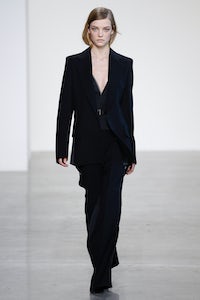 For the first time, Costa has been indulging purely decorative tendencies that were previously shrouded in rigorous, monochrome lines.

NEW YORK, United States — Minimalism was Francisco Costa's inheritance at Calvin Klein. He’s managed to make the most — or maybe “least” is truer to the ethos — of the legacy quite successfully for years, but you imagine the whole proposition getting a bit Groundhog Day for a designer, and so Costa has been feeling his way into something a little less minimal. Emphasise the little. How one craves alittle more heat, especially from a man who was born in Brazil. And this time, Iggy Pop’s stentorian declamations on the soundtrack were scarcely designed to raise the temperature.

Costa has, however, cannily attached his explorative mood to the great house icons, last season the slip dress, this season the suit, both approached with a yen for extremely sophisticated deconstruction. hems were raw in Thursday’s show, the tailoring trailed straps and suspenders. The dresses were languidly dissected too.

And for the first time, Costa has been indulging purely decorative tendencies that were previously shrouded in rigorous, monochrome lines. For Autumn, that meant fur, in big faux collars and sleeves, as a photo of a coyote pelt printed in shift dresses, or lynx printed on a leather coat.

More striking was the way he set slices of agate into what amounted to eveningwear in this rigorous context. It felt like the stones sat over significant parts of the body where the reputed properties of agate would be best placed to work their magic. One slice sat across the navel, from which sunray pleatsdramatically radiated outwards. It seemed like something Costa might have heard about in Brazil (that’s where he got the idea at least). By the way, one such property of agate is that it allegedly stops the burning desire for things we do not need. So it probably won’t be popping up in any other collections any time soon. 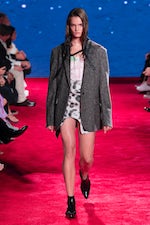 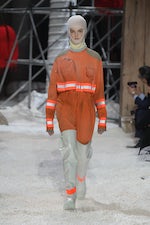 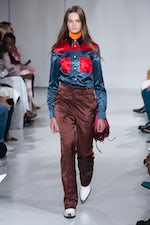 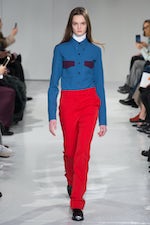