Masculinity is a club for Benan — and fashion its secret handshake. 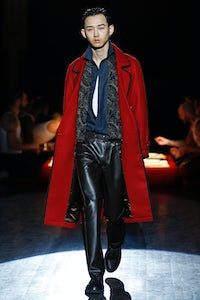 Masculinity is a club for Benan — and fashion its secret handshake.

PARIS, France — Umit Benan’s design obsession has always been the uniform codes of hermetic male societies — army barracks, sports teams, hedge funders, the Escobar gang. In reflecting those codes, his shows have paraded masculinity in a hyperdrive so intense it could make you nervous. Same thing with his latest — a collection he called Tokyo Diary.

It looked like Benan’s average day in the city ran a gamut from kickboxing and sushi to getting wasted in the Golden Gai, a tiny neighbourhood of tiny bars, some so small there might be room for just six drinkers. And they’d probably be yakuza, Japanese gangsters. Benan said Ridley Scott’s film Black Rain was a huge inspiration (Haider Ackermann name-checked the same Tokyo-set thriller earlier in the week — such fashion synchronicity never ceases to surprise). Its star, Andy Garcia, has always been Benan’s kettle of Latino fish, but here, his first look, a sleek, sinister and switchblade-y baby yakuza, was more in tune with Tokyo’s tension.

But what really turned Benan on was the guys of the Gai who’d go drinking straight from their martial arts classes, with streetwear worn casually over their karate clothes. Benan loves hybrid clothing. His theme gave him an opportunity to mix his own outerwear signatures (he excels at leather bombers and 1950s-ish overcoats, here an oversize example in wool bouclé looked Robert Mitchum-ready) with yukatas and karate suits. Western structure, meet Eastern ease. The pinstripes were a case study: you could probably kickbox in an unstructured coat and drawstrung pants.

Benan claimed he was toning down the luxury with this collection. He wanted something freer, younger and a little more street, in the vein of the new wave of Gosha and Vetements. His street casting was typically rough, swarthy and slightly intimidating (one wiry show-off was doing one-handed push-ups backstage). A group of them spent the show dining off a sushi-covered naked woman lying in the centre of the catwalk. (That particular table setting is called nyotaimori in Japan). “People might find it vulgar, but that is who I am,” Benan declared unapologetically. But who he also is, is a master of stylishly twisted classic menswear, and that was ultimately what you took away from this presentation once the karate jackets and pants had been folded up and put back in their tansu.