A Matter of Scale at Marni 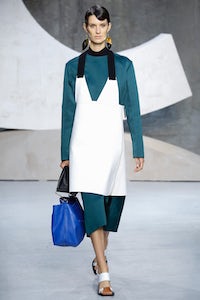 A Matter of Scale at Marni

MILAN, Italy — Marni’s Spring collection felt big, not in the number of outfits but in the scale of the clothes. “Movement, fluidity, architecture,” were the three talking points Consuelo Castiglioni isolated. She was thinking about the way clothes shape the body as they move round it. That thought process crystallised in the very last look, a huge length of bonded satin, at first glance loosely, casually tacked around the body. Except, of course, it wasn’t. It was draped round a scuba body piece, and the way it subtly defined the torso had a sculptural quality. Abstract yet concrete, just like Marni's vast industrial show space, which had been customised for the occasion with swooping architectural shapes.

The rest of the collection was full of similar effects, designed to highlight physicality: release in the long skirts scissored into panels, restriction in a leather slip dress laid over a coat. That was a typically counter-intuitive Castiglioni move, sounding clunky, looking strong. And, bizarrely light. That’s because volumes flowed. Layered pieces that looked imposing from the front were airily opened out in the back, and there was often a sense of a sinuous something moving underneath, whether a sequinned skirt or a cotton string vest turned into a tank dress. A pattern of circles, a long-time Marni signature, was stitched together in macramé. It was a way to reveal and conceal at the same time, without recourse to more conventional sheer fabrics. The same effect was used in an overdress, patchworked from leaves of beads.

Those leaves provided the graphic element you expect from Marni. At times they looked like palm fronds. There was reggae on the soundtrack, and a palette of primary colours — red, green, blue, yellow — that was strikingly solid for the label. But, diverting though it was to consider Castiglioni turning Caribbean, the music, the make-up (huge, spidery false eyelashes) and the colour scheme were part of a plan to liberate the collection from any possible context. Unlike Autumn 2015, which spoke out loud and clear with its fierce women warriors, you could cross-reference this one all you liked and you'd still end up back at big. 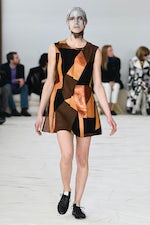 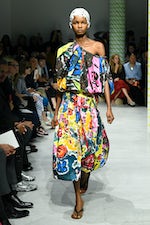 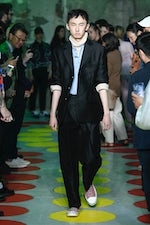 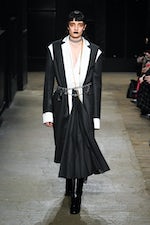