A Meditation on Extremes at Walter van Beirendonck

This season, the designer embraced the world as it is with an acknowledgment and embrace of the dark side that gives his clothes their unique spine. 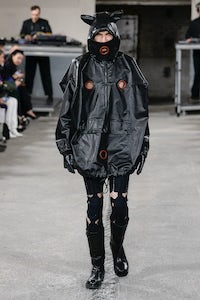 A Meditation on Extremes at Walter van Beirendonck

This season, the designer embraced the world as it is with an acknowledgment and embrace of the dark side that gives his clothes their unique spine.

PARIS, France — Walter Van Beirendonck is profoundly disappointed by the world’s turn to puritanism. Well, who isn’t? But he has a very public forum in which to express his disappointment. And he also has a new interest in his private life to fire it up still further. The working title of WVB’s new show was The Pig (an indication of his recent absorption in the BDSM world). But then he came across Cyrano de Bergerac’s proto-sci fi 17th century texts about the Sun and the Moon, and the S&M-ness of those titles won him over. So you could conceptualise WVB’s Worlds of Sun and Moon as his meditation on the extremes of the contemporary human condition.

He called his last collection Owls Whisper, acknowledging that the madness of the current moment scarcely needed another hectoring oldster pontificating about the state of things, especially in fashion. This season, WVB raised his voice, but only insofar as he wanted to design stuff that embraced the world as it is. Protection – that’s key. So there were references to firemen, lifeboatmen, the outfits worn by fishermen. They conveniently tied in with the fetishwear of the community in which the designer has been moving of late. The last look – a hooded pink latex poncho – said PIG but, in a parallel universe, it might be utilitywear for someone who worked on a trawler in the North Sea. So the clothes conveyed both protection and a spirit of personal freedom.

Fetish aside, sun and moon, light and dark are fundamental oppositions in WVB’s work. Alongside the more specialized pieces in his new collection, there was also some extremely attractive knitwear, and a hint of the sharp tailoring that is another of his signatures. WVB continues to keep the faith in fashion, even as that faith is regularly challenged. But it’s his acknowledgment and embrace of the dark side that gives his clothes their unique spine.