A Meditation on Skin at Craig Green

The fact that all of the shimmering possibilities that inform his collections also animate a global fanbase is the single most encouraging thing about the current state of menswear. 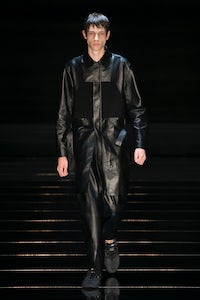 A Meditation on Skin at Craig Green

The fact that all of the shimmering possibilities that inform his collections also animate a global fanbase is the single most encouraging thing about the current state of menswear.

LONDON, United Kingdom —  Skin is the body’s largest organ, the membrane that keeps us whole and protects us from the seeping enormity of Nature. From the pieced leather looks that opened his show to the body scans that closed it (he compared them to “alien dissections”), Craig Green’s stunning collection was a meditation on skin, the very fundament of what makes a man a man…or any body anybody, to take a more generalist view. Life, love, death — Green skirted the whole damn thing with his typically deft, disconcerting ambiguity. I mean, SKIN. Buffalo Bill making himself that hideous human skin “suit” in “The Silence of the Lambs”, prancing around to “Goodbye Horses” by Q Lazzarus. There was that very same song on the soundtrack. A cue, for anyone who chose to recognise it.

It’s become Green’s signature to extract beauty from the macabre ( in that, he may be British fashion’s true heir to Lee McQueen’s legacy). He showed a group he called “dream suits,” as in something you’d wear to dream in. They featured a padded silk musculature, like the skin had been peeled back. There were starbursts of embroidery, synapses sparking, and all around the suits fluttered embroidered mittens, skinned hands. Or signifiers of magical gods, said Green. It was a creepy effect, or it was utterly gorgeous. He gave you that option.

Same with the sequence of sumptuously toned cut-outs in nylon, inspired by the Mexican tradition of laying paper flags over dead bodies at Easter. “Something throwaway, but about resurrection,” Green said. “Lantern men sheathed in luminous colours” was the show notes’ response. Not wrong. There was such otherworldly two-dimensional extravagance in these looks that I could imagine the sceptic’s lip curling as she read my words of praise. But Green has proved himself a master of balance — as much as there was this indulgence, there were pinstriped suits of the strong, stable worker wear that has made his brand so desired by men and women the world over. Besides, Mexican death rituals dovetailed with another of Green’s fascinations in his collection. Egypt! Pharaohs were buried with everything and everyone they owned. He was talking about this after the show, but, aside from the death angle, I couldn’t quite work out how it fitted into his schema. Which is probably just fine, because definition of a thing dilutes its energy, and this was a particularly energetic collection.

The central motif may have been a mirror. The venue was the same as last season — a dank Victorian crypt -but its spatial capacity was doubled with a mirrored catwalk. Green liked the notion of looking at yourself in a mirror. Maybe that was his acknowledgement of the UK’s current state, where everyone is compelled to justify the way they feel about the country’s descent into chaos. In some cultures, mirrors are held to deflect evil spirits. In some of Green’s tops, there was a mirror over the heart.

Models walked with bits of soldered pipe that looked like nunchucks. Fierce samurai-styled self-defence? Not so, Green insisted, though he admitted he’d originally wanted the pipes to press into the models’ flesh. “Like bones, or windchimes or alien instruments…or hieroglyphics.” The fleshiness of such a notion — pictograms on skin — embodied all of the shimmering possibilities that entranced Green while he worked on his collection. The fact that these possibilities animate a global fanbase is the single most encouraging thing about the current state of menswear.