Maria Cornejo wants to slow fashion down with her warrior women. 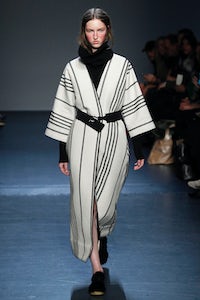 Maria Cornejo wants to slow fashion down with her warrior women.

NEW YORK, United States —  Experience has taught Maria Cornejo a fiercer lesson. There was a militant mood in her latest collection, which reflected her impatience with the way she sees the fashion industry going.

“I want to slow it all down. That’s why I showed back to front, with the finale first.” She said she’d done this so anyone in a hurry could up and leave after a few minutes, feeling they’d seen everything they needed to see.”

Cornejo was surely being mildly sarcastic with that statement of intent, because anyone who left after that “finale” would obviously have missed a more meaningful opportunity to engage with her warrior women. At least that’s what they felt like, marching by in their flat suede boots. Iceland and Berlin were geographical points of reference claimed by Cornejo — a shearling tunic said one, a slinky one-shouldered top and skirt in black charmeuse spoke to the other — but there were distinct notes of lady samurai too, in black leather gilets and enveloping kimono-like wraps. Cornejo’s textures are always enthralling. A parka in brushed mohair, a dress in puckered crepe both had an artisanal Japanese flair. 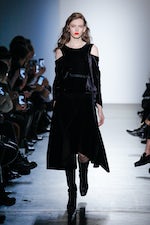 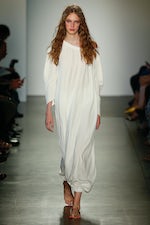 A Brave Step at Zero+Maria Cornejo 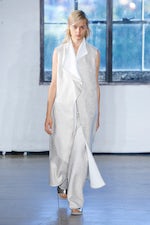