A New Agenda at Marcelo Burlon

What paraded down the long catwalk was perfectly easy and certainly desirable, with little fashion pretence. 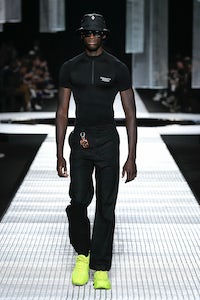 A New Agenda at Marcelo Burlon

What paraded down the long catwalk was perfectly easy and certainly desirable, with little fashion pretence.

MILAN, Italy — The title of the Marcelo Burlon show, held in the frighteningly vast Palazzo delle Scintille, was "Technofolk". While the "techno" aspect — as in high-performing gear — was evident throughout, the "folk" aspect was not so much, and all the better for it. Over the past few seasons, in a conscious strategy to bring the New Guards Group-backed label, which started a little more than five years ago with a bunch of t-shirts and sweatshirts, to a new level, Burlon has tested many different, more properly "fashion" — as opposed to streetwear — grounds. Sometimes it has worked, sometimes not so much.

Either way, the effort to be something else made things feel a bit forced and less authentic. This collection, however came with a new agenda. Burlon was getting back to where it all started  — simple, useful garments with bold graphics — but he was not replicating the past. Instead, he revived that fuss-free spirit with today's consciousness. The collection was a crash of cycling clothes and urban wear, which made for a bright, performing wardrobe of dusters, windbreakers, pants and seamless pants. The graphics, meanwhile, were crispier and punchier. What paraded down the long catwalk was perfectly easy and certainly desirable, with little fashion pretence. It felt refreshing, with the only minus being the show went on for too long. A vigorous edit, with a collection like this, would have helped a lot.