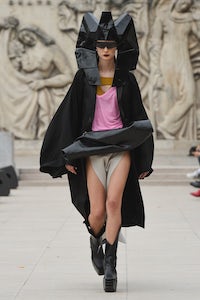 PARIS, France — “Why don’t I have an anteater?” Before his show on Thursday, Rick Owens was reflecting on Salvador Dali’s unusual choice of pet. He himself has just added a hairless Egyptian cat to his ménage at home. It’s making life hell for his Bengals. “A hideous little gargoyle,” he said delightedly.

Like Dali, there is never anything usual about Rick Owens. But, even with a career that has so far made hay with the jaw-dropping, this new collection, a shiny, shimmering exercise in sheer lyricism, came as a stunning surprise. “It is pretty, isn’t it?” Owens said drolly. “I don’t know what that’s about.”

Pretty? No, try majestically beautiful, all of it, both clothing and context. The designer filled his usual monumental art deco show space at the Palais de Tokyo with bubbles. He got the idea from “Air Castles,” a famous work by the early 20th century illustrator Maxfield Parrish. Then he found the bubble blowers in a park. “We turned it into a ceremony, dressed them in black robes. Their ‘blowers’ looked like they were holding spears. From spears to the innocence of bubbles. That gesture was so beautiful.”

Rick had originally considered balloons. They reminded him of his childhood, when the Owenses would visit his mother’s side of the family in Puebla, Mexico. Building on the notion of his roots which he started to explore in his men’s collection, he’d also called this one Tecuatl, after his grandmother’s Mixtec maiden name. He ladled on spectacular amounts of sequins, which echoed the china poblana dresses his mother wore for church pageants in Puebla. And there were big coats and capes and gorgeous ruffled pieces, softer and sweeter than anything we’ve seen from Owens before, that had a similarly folkloric inspiration. But with their shimmer and their scale, they also had the imposing glamour of María Félix, the Dietrich of Mexican cinema. Rick’s dad used to take the family to see her movies in a run-down movie theatre in downtown Porterville, California. Tecuatl’s soundtrack featured her voice, disembodied by electronics.

The alien, pagan beauty that is an Owens signature was given a Mexican makeover here, from the pyramid crowns on down to the sci-fi cowboy boots. He’d seen a show illuminating Bauhaus pioneers Josef and Anni Albers’s natural affinity for the innately modernist lines of Aztec buildings and hieroglyphics. And he’s always loved the colours and spaces of Luis Barragán. “I have Mexico and modernism inside of me, and this was the Mexico I wanted to look at, not Frida Kahlo, not piñatas.” Barragan’s colours and the Albers’s strict geometries added new dimensions to his own signatures, building not castles but pyramids in the air.

With the increasing politicisation of all aspects of culture, and the ugliness of the popular debate, there has been the odd suggestion this season that beauty can also be a form of resistance, a protest even. Owens celebrates his heritage at a time when Donald Trump would like nothing better than to divide his 87-year-old mother from her family in Puebla. That’s a new kind of awareness in his work. Even those bubbles… "Yes, they could be a protest. Innocence against cynicism."