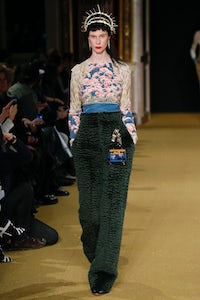 PARIS, France — Jun Takahashi called his exquisitely strange collection Perfect Day, the title of a song by one of his musical heroes, Lou Reed. It’s long been alleged that the lover hymned by Reed was actually heroin, which loaned a shadowy ambiguity to the song’s sombre sweetness. Ambiguity also lurked in Takahashi’s collection.

The headgear alone told a tale of seductive eeriness: a tiara morphed in rapid succession from crown of thorns to halo to victor’s wreath to starburst to a thicket of gilded branches. The clothes followed their own peculiar path, variations on a theme of soft, fuzzy cocooning, reflecting Takahashi’s own idea of a perfect day: “Nothing happening, calm, peace.”

The kind of day, it seemed, you might spend winding down in your nightdress or your pyjamas and dressing gown, because that was what the soft, fluid volumes of the collection most closely evoked. Plus, there were fluffy slippers. And one woman, wearing a striped nightshirt over her knitted sleepsuit, was carrying a fluffy pillow.

The dreamy languor of the clothes was initially intoxicating, but then you started to process the details. A crown of thorns with fluffy slippers? A trenchcoat mutating into a mohair muffler? Furry, toxic-toned pompoms? For his men’s collection, Takahashi drew on the haunting paintings of modern Belgian master Michaël Borremans. Here, it was Berlin-based collagist Matthieu Bourel’s surreal cut-ups that provided the graphics. They were slightly macabre, like the giant spider that traversed a handbag, or the mutant wasp clinging to a comfy knit cardigan jacket, or even the print of cats, witches’ familiars, frolicking across the hem of a bed-jacket.

By the time Christina Kruse appeared, barefoot in a lethally studded black top over a full skirt of gold feathers, like a pagan priestess, the dreaminess had taken on the merest hint of nightmare. “Cold turkey,” nodded Takahashi, acknowledging the maybe-inevitable end to this particular perfect day. 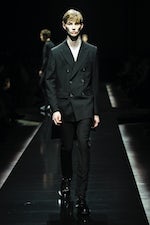 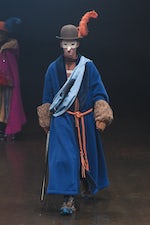 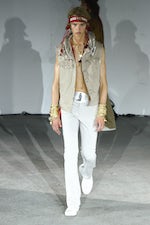 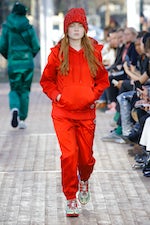