In its single-mindedness, Maria Grazia Chiuri's collection scarcely seemed to address her critics. But there was grandeur in her monomania. 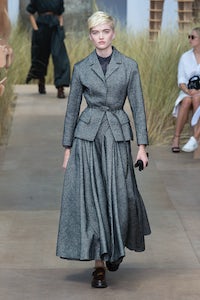 In its single-mindedness, Maria Grazia Chiuri's collection scarcely seemed to address her critics. But there was grandeur in her monomania.

PARIS, France — Maria Grazia Chiuri was tempting fate in more ways than one. First, a show held unambiguously outdoors during days when the heavens are as likely to open with a deluge as they are to stay shut with blinding sunlight. Second, a collection that, in its single-mindedness, scarcely seemed to address the critics who insist she doesn’t have the breadth or the levity to assume the mantle of Dior’s extraordinary legacy (and we’re talking here about the man and the designers who followed him).

Well, with this collection, it felt like Chiuri was making like Adele and saying Fuck Off World! (or at least that segment of it which is inclined to negativity about her place at Dior). Acutely conscious of the fact that she was showing on the same day as the majestic Dior retrospective was opening at the Musée des Arts Decoratifs, she wanted to pay homage.

The shownotes linked almost every look to a Christian Dior original. For instance, an organza blouse and wool serge skirt evocatively titled Drags echoed an ensemble from Spring/Summer 1948. A sensational portrait-necklined gown in smoky grey velvet was, in Autumn/Winter 1958, known as “Espoir”. (My maths is bad, but this might have been a Saint Laurent situation, after Dior’s demise). And all the other sober outfits, cut from menswear fabrics in Dior grey, had serious fashion heritage. Their restrained parade, one after the other after the other, made me wonder what Snapchatters would think of couture presentations in the 50s, or even the 80s, when Saint Laurent or Ungaro would show 150 looks over the leisurely course of an hour or so. We’re spoiled utterly rotten with our silly little attention spans.

But there was grandeur in Chiuri’s monomania. In her continuing exploration of the power and inevitable world domination of women (fingers crossed on this one), she fixed on female explorers, the adventurers of the early 20th century, women the likes of Freya Stark, Isabelle Eberhardt, and the aviatrix Amelia Earhart. (The Stephen “Indiana” Jones fedoras were a giveaway.) “Sometimes our culture imprints passivity, conventionality,” Chiuri mused. She named looks for women who often died in their desire to break that mould. Stark’s was a coat in herringbone cashmere over floorsweeping organza. Aviatrix Amy Johnson, who died during a mission in WWII, was the inspiration for a fabulous shearling jumpsuit. Can you hear the so-whatters banging their gongs? So what!

What all her inspirations had in common was a love — and a need — for maps. The metaphor was overpowering. Chiuri is adrift in a new world at Dior. She doesn’t even speak the language. But she’s keen to learn, and in her nosing round the archive, she found out a whole lot she didn’t know about Christian’s global ambitions. Seven years after the New Look, he was already opening stores everywhere from New York to Havana, overcoming his natural disinclination to travel by taking models and clothes all over the world. Peru! Japan! Chiuri found a 1953 etching that mapped out the world according to Dior. It clarified for her the company’s innate universality.

That etching was reproduced in gold on the back of a black cashmere coat in this collection. And Chiuri met with artist Pietro Ruffo in Rome, who made other maps for her, maps of emotions, linking the body’s intricate byways with the natural world’s patterns. Dior loved the tarot, one way to extract order from the seeming chaos of nature. Chiuri shares his fascination. The tarot appeared here as an embroidered patchwork on a coat.

Maps mean journeys. Journeys mean destinations. All the women that Chiuri invoked embarked on huge, often self-destructive quests. And that begged the question: what is she looking for? “I don’t know myself very well,” she said, with a hearty laugh that suggested she wasn’t remotely bothered by that fact. “And I think you never finish this journey.” Chiuri was very taken with one style in the collection that Dior had originally called “Abandon” in 1948. Hers, in grey wool crepe, had a neckline skewing sideways, a little bit crazy. ‘You go away and you leave something,” she said. “And in some way you lost something, but you have something new.”

And if she isn’t talking about herself, then I’m not Dr Freud.